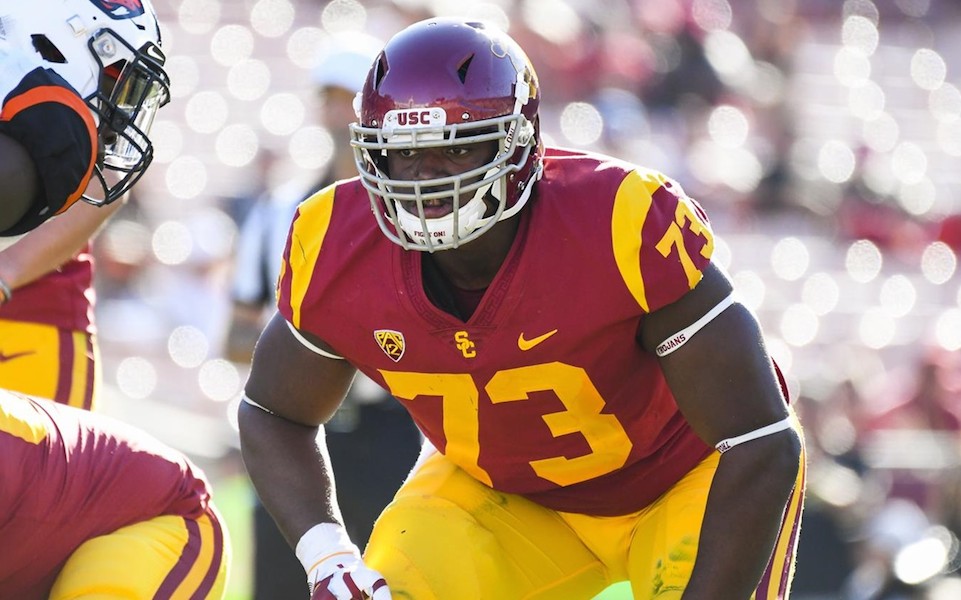 One of the key open spots in the USC line-up for the upcoming season will be at left tackle, where Austin Jackson and Clayton Johnston are competing to take over for Toa Lobendahn, who has made the move to center.

It’s a high-profile position with alumni that include names like Anthony Munoz, Tony Boselli and Matt Kalil but for now the focus is simply on finding someone who can solidify the line as it looks become the foundation for a USC offense that will feature inexperience at several skill positions.

Jackson (6-6, 290) has yet to start a game for the Trojans after arriving as a 5-star recruit from Arizona with the legacy of a grandfather who played on the USC line in the 1970’s. Johnston (6-5, 295) has three career starts after originally arriving as a blueshirt scholarship recipient in 2015.

The common speculation is that the spot will eventually go to Jackson, who definitely looks like what a left tackle should look like to go along with tremendous athleticism. Jackson had been sidelined from PRP drills earlier in the summer due to a minor pec issue but returned this week and is focused on what lies ahead in fall camp.

“The injury was nothing serious at all,” Jackson said. “We didn’t want to rush anything to get back during PRP’s because I already know the plays, but with fall camp coming up I’m excited to get back out here with the team. My mindset in camp is to take the open spot. I don’t want to try and force anything. I think I’ve got a lot of tools in my toolbox, I’ve worked hard for this and I feel ready.”

One key to have him ready is the fact that Austin did not redshirt last year but he did see action in all 14 games as a reserve offensive tackle and special teams performer (including three tackles and a blocked kick).

“I’m a hands-on learner,” Jackson said, “so getting a chance to play last year did more for me than a redshirt year would have. Now it’s just football again, I know what to expect, I know what the expectations are for me and I know my ceiling, I know what I can do. And it would be great to honor those who have played the position before.”

For Johnston, he was also able to gain valuable experience last year when injuries struck the offensive line, particularly in the Washington State game, along with the first team reps he’s been taking all summer in PRP’s with Jackson on the sideline.

“It was awesome being out there last year and it did a lot for my confidence and adjusting to the speed of the game,” Johnston said. “As time goes along things start to come more naturally, and this summer has given me an opportunity to continue to grind, learn my plays and try to get better for me individually and as a member of this o-line. There’s always room to get better though and right now I’m trying to put some good weight on and be ready for camp.”

Johnston deserves a lot of credit for his development to this point in his career where he is able to mount a legitimate challenge for the left tackle spot, and it’s clear the coaches have the confidence to put him on the field if needed.