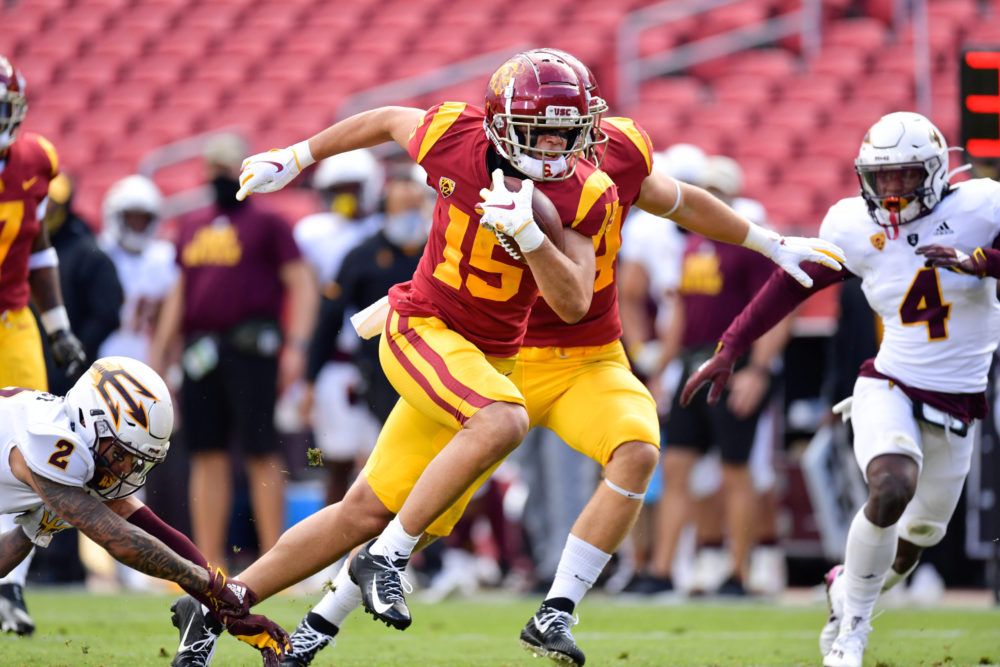 USC’s star receiver Drake London reflects on letting go of basketball, assuming a leadership role, and taking his game to the next level.

How good has he been?

Anybody could answer that.

He’s caught at least three passes in 14 of the 19 games in which he’s played. He caught touchdown passes in six-consecutive games over the 2019 and 2020 seasons. And he authored arguably the two most impressive plays of the season for the Trojans in 2020, with a game-winning touchdown catch against Arizona State and a jaw-dropping catch-and-run touchdown against UCLA.

But how good could he be this coming year?

Even Drake London doesn’t know yet.

The 6-foot-5, 210-pound London will enter his third season at USC with 72 receptions for 1,069 yards and eight touchdowns. He’ll also enter it as the clear-cut No. 1 receiving option for the first time. But perhaps most importantly, his decision to not play basketball this winter and spring means that he’ll focus on one sport — football — for the first time since arriving at USC, and well beyond that.

“This is my first season that I’m able to have a full offseason just to focus on one sport pretty much my whole life, so I’m excited to see where I go,” London said. “With coach Stiner and the new strength staff, I can take my body to new heights. I don’t know what my body’s capable of, so we’ll just see.”

London said the decision to drop basketball was not an easy one to arrive at. He sat down with his family after the football season and together, they came up with the pros and cons of focusing only on football before arriving at a decision.

“It is a part of me that has left,” London said. “It kind of sucks because that was my first love, the first sport I ever picked up. But everything happens for a reason.”

Head coach Clay Helton, offensive coordinator Graham Harrell, wide receiver coach Keary Colbert and the rest of the Trojans staff and players likely hope that reason is an All-American season from a player who enters this year as the Trojans’ most potent offensive weapon.

London doesn’t exactly fit into a specific mold as an offensive weapon. He’s sometimes lumped in with the tight ends and other times with wide receivers. He calls himself a hybrid wide receiver, and strives to meet an NFL player comparison of Tampa Bay’s Mike Evans. He said this season, he’s looking to prove himself in multiple ways.

There is always an expectation for USC to have at least one standout receiver, and this offense demands it. In the past, there have been a few instances of receivers coming back for their junior or senior seasons and making a major jump in both mental understanding and physical performance. Michael Pittman Jr. was a recent example, when he turned in a phenomenal 2019 senior season that dwarfed what he had done to that point.

London said the coaches have lightly addressed that concept with him, but it hasn’t been a major talking point. At this point, London said he’s just doing what he can to get himself and his teammates better. Colbert agreed.

“Drake is very driven, very motivated, and he’s self-motivated,” Colbert said. “He has high expectations for himself and for the team. He’s excited to be in a role where he is the most experienced, most veteran player in the room. But at the end of the day, there’s no pressure for him to do anything other than what he’s done in the past. For him to take it to the next level or to another level, that would be great and awesome and we look forward to that. But at the end of the day, there’s no pressure on him to do or be anything other than Drake London. I think that is enough and guys will naturally follow his lead because he has a great working mentality, a great attitude and guys love being around him.”

London’s path to this point in his USC career began with a bit of a head start, but that’s in keeping with his drive to succeed. He didn’t enroll early at USC because he was finishing up his senior basketball season. But you wouldn’t have known it from taking attendance at USC’s 2019 spring ball practices. London seemed to be there more often than some of the players already on the roster, as he stood near the offensive huddles or watched intently from the sidelines.

“I made sure once I was done with basketball season that I could at least watch,” London said of USC spring ball. “I’d write down all the plays and try to get a head start for myself coming into the season, because I knew I would be a little bit behind the early enrollees. I can say it helped me tremendously.”

London arrived on campus as part of a phenomenal group of incoming wide receivers, with five-star Bru McCoy and four-star prospects Kyle Ford and Munir McClain. Injuries, illness and other issues have stalled the production of those three — though all have at least shown flashes of their talent — while London was able to develop a quick connection with quarterback Kedon Slovis that fall.

It was evident during fall practice that fall when Slovis — a true freshman backup to J.T. Daniels — dropped back to pass, he was looking for London more often than not. That connection carried over when Slovis took over as the starter that season. The second pass of his first start, against Stanford, went to London for a 45-yard gain. And the two have been a nightmare connection for opposing defensive backs ever since.

“When we both came here, we were both in the same boat,” London said of he and Slovis. “We weren’t too-highly recruited athletes and on the second team, we kind of had to rely on each other. Once we did that, the connection started building and building.”

London said the two have never talked about that quick rapport they developed early and continue to develop now. But he laughed when he mentioned the first and only time it was brought up.

“It’s never been spoken of but one time, and that was the first time I actually met him and didn’t know who Kedon was, and I don’t think he knew who I was,” London said of a quick conversation between USC Director of Player Development Gavin Morris and the two players. “Coach Gavin told me, this is the dude who’s going to be throwing to you, and we just laughed it off. We didn’t even know each other’s names after that. It was just funny.”

Now, both players are household names on a national level and will be vital to USC’s success in 2021.

Colbert said he hasn’t been surprised by anything London has done since arriving at USC. He’s simply filling his role as the next great USC receiver.

“He does things that wow me every day, every week, but he’s just that type of special player,” Colbert said, mentioning the receivers who have come through recently and those still in the wide receiver room. “Those guys, they get opportunities and they’re special players. They have times where you say, ‘Dang,’ but that’s exactly why we recruited them. I’m definitely excited when they do it and we celebrate it all the time. Those guys work their tails off and it means a lot to them to do great. I’ve got the best seat in the house.”

Harrell spoke last fall about the importance of London to the offense heading into the 2020 season, saying that if the Trojans are going to do what they want to do offensively, London will need to be a big part of that. While he’s fought for receptions alongside established veterans each of his first two seasons, London will enter the 2021 season with more than double the career receptions of all the other returning USC receivers, combined.

USC has added some experienced help in the form of Colorado transfer K.D. Nixon, but it’ll likely be up to London to lead the way this season. He’s had a few great USC receivers to watch during his time at USC, with Pittman, Amon-Ra St. Brown and Tyler Vaughns all preceding him as leaders in the receiver room.

London said it’s the leadership skills of those three that he’ll look to carry with him into the season.

“They’re different leaders in all types of ways,” London said of the former USC receivers and what he tried to take from playing with them. “Just learning from them, trying to pick their brains every practice. Because now I have a little bit of responsibility on my shoulders, so learning from them was a big thing.”

London said keeping the culture of the wide receiver room the same now that all three of those veterans are gone is a priority for him.

“The mentality is going to be the same since I’ve come here,” London said of the position group’s focus this season. “We want to keep it going and pushing that Wide Receiver U.”

While the ground game likely needs to get going for USC to reach its true potential as an offense, Slovis, London and the passing game will be front and center again for the Trojans in 2021. And it looks as though it could be potent.

The potential is there for this to be yet another dangerous group of USC wide receivers. With London leading the way and the addition of Nixon, the Trojans will also have McCoy, Kyle Ford, Gary Bryant Jr., John Jackson III, Joshua Jackson Jr. and three incoming true freshmen, among others.

“I’m really excited to see our receiving corps,” London said. “We’re so versatile, you can literally have your pick at anything.”

“I’m excited to watch these guys take their opportunity,” Colbert said. “They came to USC for this moment. We’re going to miss those guys, having their experience and playmaking ability in the room. But we recruit guys very single year that we believe in, that can have the same level of success — and some even greater. We have the opportunity to recruit some special players, and this is their chapter now.”

As for the player expected to lead the way, does London feel he has another level he can achieve this season?