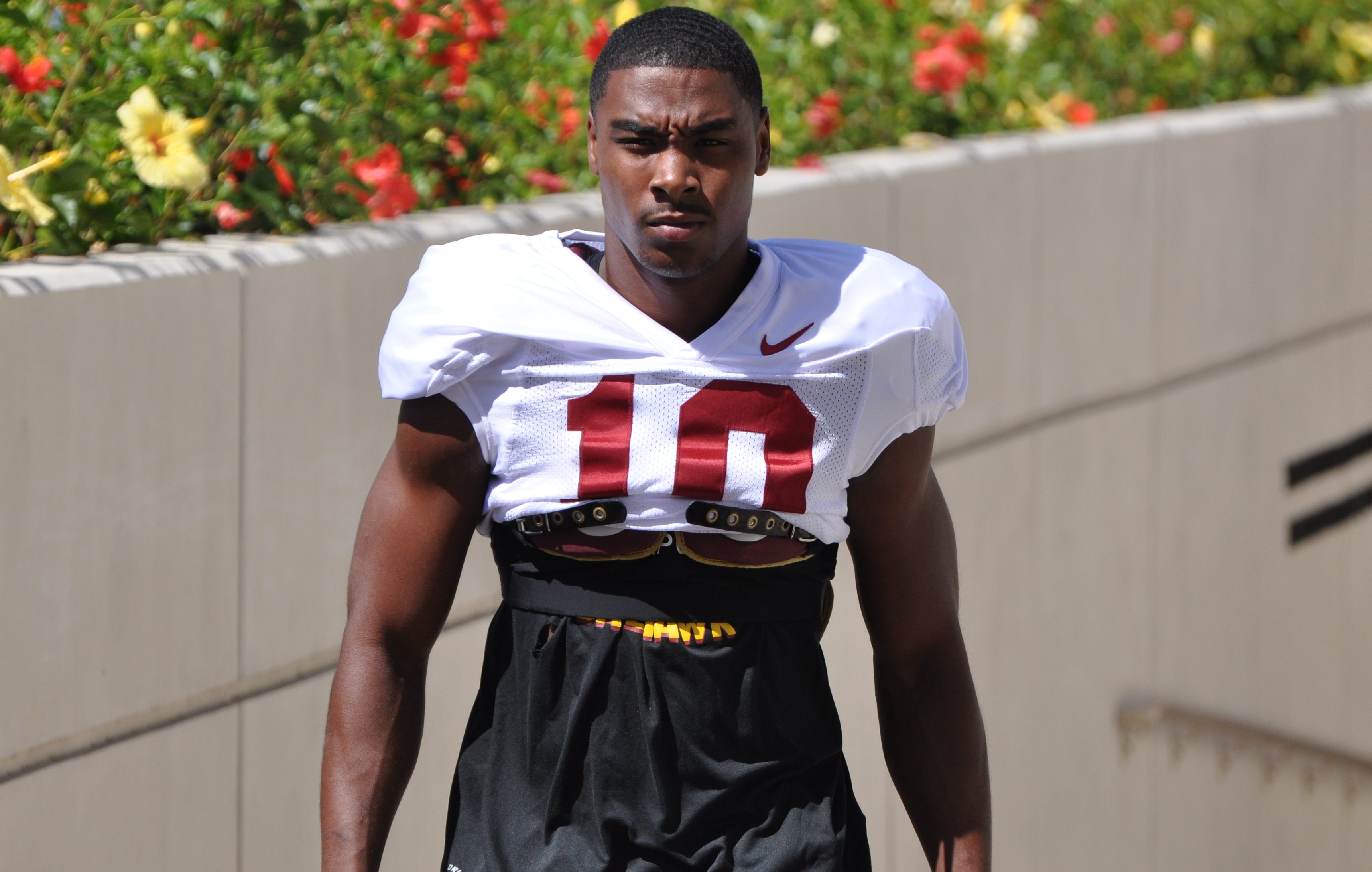 No position on the USC roster has seen more shuffling than linebacker since last season, as all four players to start fall camp on the two-deep at inside linebacker are at different positions, several true freshmen were added to the mix, and we’ve seen a few more position changes already through the first week of fall camp.

Major questions face this position group, as it must replace a four-year starter at middle linebacker in Cameron Smith, make sure that the falloff in production when Porter Gustin went down with injuries doesn’t continue, and find a way to unleash talented sophomore Palaie Gaoteote on opposing offenses.

The linebacker spots feature a middle and weakside linebacker manning the two inside spots, and an outside linebacker that often works like a defensive end. But the two inside spots could be where the linebacker group will be judged most seriously this season, as opponent highlight reels of long runs straight up the middle or bouncing off USC defenders have likely been playing in opponent locker rooms all offseason. Shoring up tackling was a talking point for USC fans coming into this season, and it’s not surprising to hear that USC coaches were on the same page.

“No doubt,” linebackers coach Johnny Nansen said of an increased emphasis on tackling this year. “After spring, coming back out, we said, ‘What do we need to work on?’ Tackling was the first thing we talked about. And you see us; every single day we’re focusing on the little things.”

As with every level of the defense in 2019, Nansen hopes his group can find success through simplicity, a buzzword coaches at every position have used since the start of spring ball.

“We have to keep things simple; let them play,” Nansen said. “I know we have the players, so [we have to] allow them to play and don’t do too much. That was the problem last year. We tried everything and that’s when the big plays happened.”

The guys responsible in large part for making sure this simple scheme gets translated to the defense, and those big plays are a thing of the past, are senior middle linebackers John Houston and Jordan Iosefa. Houston spent his USC career at weakside linebacker before moving to the middle this spring, while Iosefa was an outside linebacker in 2018. The two split reps at middle linebacker this spring and were on track to continue this fall before Iosefa suffered a dislocated kneecap that will keep him out for what could be four to six weeks.

Moving Houston to the middle was an easy call for the coaches, and something he seems to have responded to, as he has been one of the more vocal players at any position this fall.

“He has more experience, and it’s putting less pressure on [Gaoteote],” Nansen said of Houston. “John has seen it all, so it’s easier for him.”

And that puts Gaoteote, who made the move from middle linebacker to weakside linebacker, at an advantage as well, as he might not have been fully ready to take up the mantle in the middle.

“He just has to continue to learn,” Nansen said of Gaoteote. “He’s such a talented young guy. He can do it all. He’s got it all. But it’s just, every day, that’s my job as a coach is to keep reminding him. Because once he figures it out, watch out. He’s pretty special.”

Behind Gaoteote, Kana’i Mauga moved from outside linebacker to inside this past spring. And now with Iosefa out of the lineup, true freshman Ralen Goforth has taken some first-team reps at middle linebacker.

Goforth was a three-star prospect in the 2019 recruiting class, but impressed during practices this past spring as an early enrollee, and after practices as well, as he would routinely spend extra time doing drills by himself. This fall, he’s continued to make plays and could be on his way to becoming a three-star recruit, turned just plain college star.

“I think our job as coaches when we go out recruiting, you have to look at the intangibles,” Nansen said. “I don’t care what the stars are. That’s for other people. I want to see if the guy can play football. Does he have the mindset to understand football? I’ve seen the kid for two years now and I see him run the show down at [St. John] Bosco.”

Nansen said the coaches were able to “put him on the board,” where a player is asked to use a whiteboard to diagram and break down plays or answer situational questions.

“I said, ‘Hey, that’s the right guy,'” Nansen recalled saying of Goforth. “We can work with those guys. It doesn’t surprise me.”

While Goforth is getting thrown into action early in his career, all of the linebackers, and truly all defensive players, are seeing more plays in practice this fall because of the up-tempo offense being run across the line of scrimmage. While debates rage about whether you can have a strong defense across from and Air Raid offense, the USC defensive coaches have been adamant that they like what this offense is doing to the defense this fall.

“It helps us get in shape and it helps us play fast, getting lined up and things like that,” Nansen said. “But they’re still running the football. We understand there’s 12 personnel, and they have two tight end stuff that we need to work on. The first six games, it’s going to be 12 personnel, 11 personnel. But it’s going to help us in the long run with all the teams we’re going to face later on in the season. The speed of the game is helping us, so I’m kind of fired up.”

True freshmen Maninoa Tufono and Tuasivi Nomura have also gotten into the inside linebacker rotation, while Eli’jah Winston moved from outside to inside late this past week.

Outside linebacker looks like its own position group during practices, as Hunter Echols, Malik McClain, and now Juliano Falaniko, who has also spent time inside, work with outside linebackers coach Joe DeForest. But Nansen said all three positions work as a cohesive unit, watching film and studying together. That outside linebacker position, where Uchenna Nwosu found massive success during his senior season in 2017, is in for a battle against true freshman defensive end Drake Jackson and senior defensive end Christian Rector, who might make it difficult on the USC coaches to not go with them as two true defensive ends on a consistent basis for much of the season.