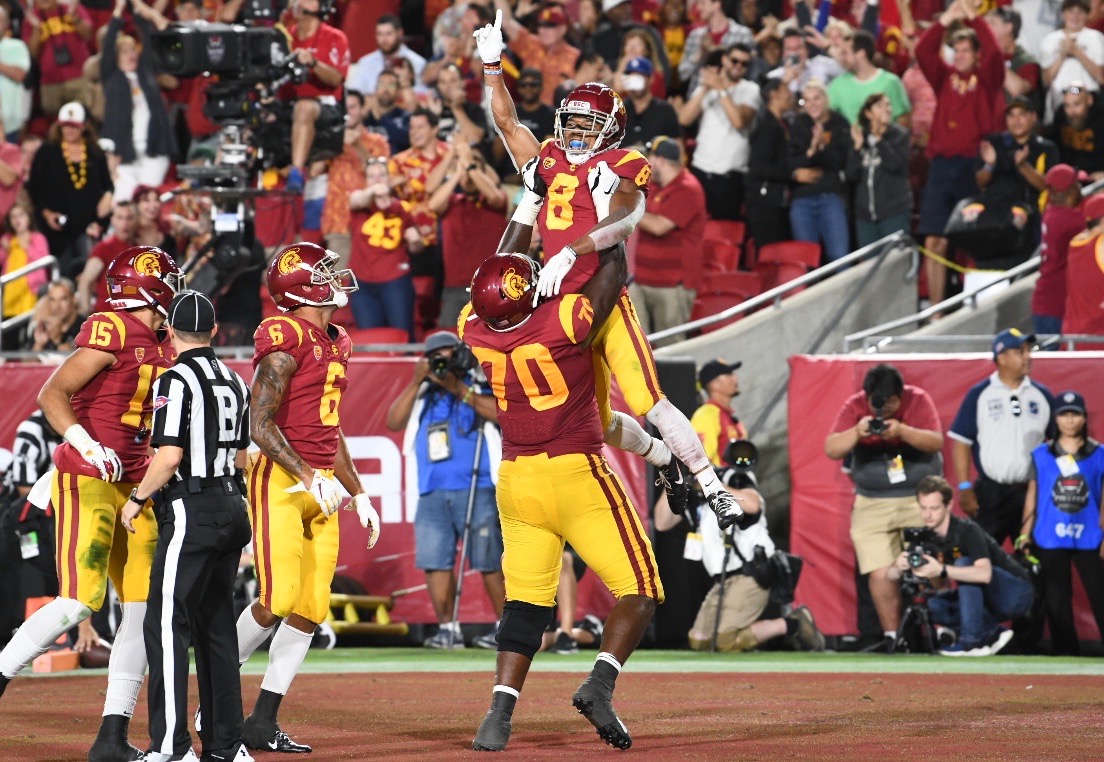 Kedon Slovis just finished the first start of his career, and that might be a scary thought for USC’s future opponents.

The true freshman quarterback completed 28-of-33 passes for 377 yards and three touchdowns in leading USC to a 45-20 win against Stanford.

Head coach Clay Helton and offensive coordinator Graham Harrell talked all spring and fall about what a terrific talent Slovis was, and now everybody — especially the Stanford defense — has no choice but to believe it.

“We knew his talent and we understood the type of players our quarterbacks are,” Helton said of Slovis. “Even though he’s young, we named him the No. 2 for a reason. Let’s go cut him loose…It was fun for me to watch.”

To a man, every Trojan player who talked about Slovis after the game said there was no surprise to see him do what he did.

“I’m not surprised at all,” center Brett Neilon said. “I’ve watched the kid…Everybody in the locker room believed in him.”

Slovis was in control from the first snap of the game, when USC came out in a five-wide set and made it known that they’d be putting the ball in Slovis’ hands. Slovis responded by completing his first four passes for 70 yards in marching the Trojans down for a field goal.

It wasn’t all easy for the Trojans, as Stanford responded with a 17-0 run to take a 17-3 lead, capitalizing on a fumbled kickoff return by Velus Jones, which the Cardinal turned into a field goal.

But Slovis and the USC offense found a way to respond after adversity, which hasn’t been the case for the Trojans of late.

“We have this saying: ‘So what? Now what?’” Helton said of responding to challenges. “At the beginning of the game, we had to say ‘So what? Now what?’ And not blink and not flinch and just keep fighting and know that the plays would come if we executed.”

On the Trojans’ ensuing drive, running back Vavae Malepeai converted a third-and-one, which ultimately led to Slovis hitting Amon-Ra St. Brown for a 39-yard touchdown on a beautifully-placed deep ball, for Slovis’ first touchdown on his career.

“We all knew Kedon was a great quarterback,” St. Brown said. “He wasn’t a highly-touted recruit coming out of high school so we didn’t know much about him. But after the first day, we saw he could sling the ball.”

Slovis had two more gut-check completions in the first half, as he found St. Brown for a third-down conversion to keep an eventual field goal drive going after Stanford had pushed its lead to 20-10. But Slovis’ ultimate statement that he had arrived might have come just before halftime, when, with the Trojans down 20-17 and facing a 1st-and-20 situation with two minutes remaining, rather than keeping the ball on the ground and getting safely into the locker room, Slovis hit Tyler Vaughns for 31 yards down the sideline. USC eventually scored on a short pass from Slovis to St. Brown and went into halftime with a 24-20 lead.

Asked how he’d describe his performance, Slovis, in keeping with his even-keeled demeanor, said: “Pretty good. But at the same time, how good is it with these guys (the wide receivers)? It doesn’t show how well I did, but how good a team we have.”

Vavae Malepeai finished with 42 yards and two touchdowns on the ground. Stephen Carr added a touchdown of his own, on a 25-yard run.

USC rolled up 492 yards of total offense against Stanford, averaging 8.1 yards per play.

Stanford scored on its first four drives of the game and then did not score again, as USC went on a 35-0 run to close the game.

Tyler Vaughns had 106 yards and a touchdown on five receptions, giving him back-to-back 100-yard games to start the season.

Olaijah Griffin was tested early and often, and ended the game with four pass breakups.

The Trojans recorded 10 tackles for loss in the game, twice as many as the Cardinal. Drake Jackson led them in that category, with 1.5.

Austin Jackson blocked a field goal, the second of his career.