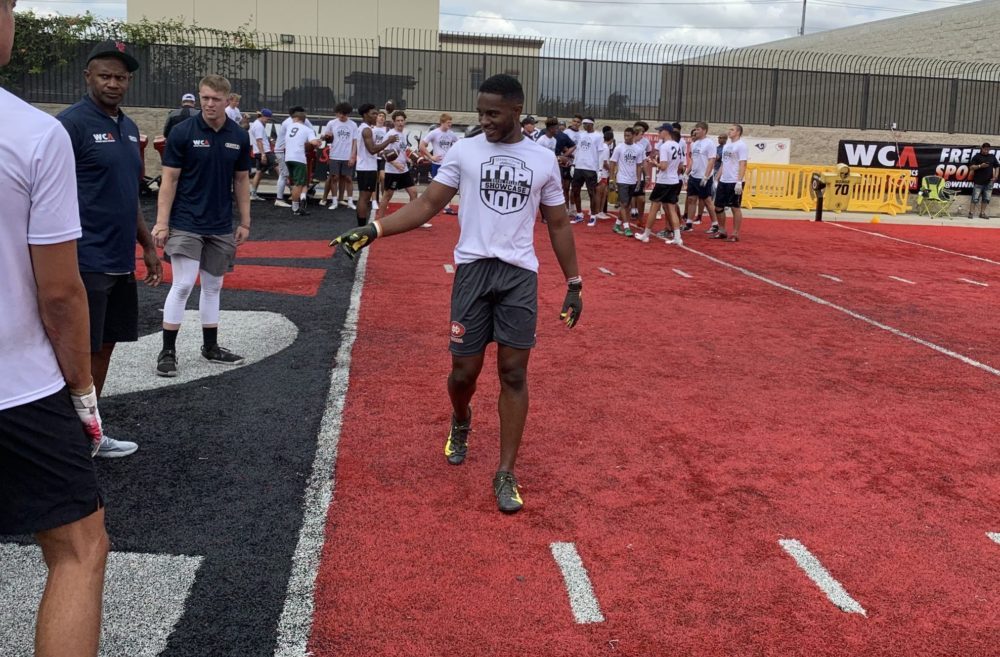 USC added another talented pass catcher to its 2021 recruiting class on Monday, as four-star wide receiver Kyron Ware-Hudson (Santa Ana, Calif./Mater Dei) announced that he would be backing away from his Oregon commitment and pledging to USC.

Ware-Hudson is the younger brother of Oregon defensive lineman Keyon Ware-Hudson and committed to the Ducks back in December of 2019. This is a big recruiting win for wide receivers coach Keary Colbert and the Trojans.

“So today, on my mother’s BIRTHDAY, I feel there’s no better present than to let her know that I will be staying home!!! At this time I’d like to announce that I will be committing to The University fo Southern California,” Ware-Hudson tweeted on Monday morning.

Ware-Hudson is a solid wide receiver in every sense. He’s physically developed to the point where he’ll already be a difficult cover for cornerbacks as a true freshman and he’s a very good route runner. He doesn’t have elite speed, but what might separate Ware-Hudson from other receivers is his hand strength and catch radius.

As a junior last season, Ware-Hudson caught 59 passes for 853 yards and 13 touchdowns.

It’s not difficult to see Ware-Hudson fitting into the USC offense fairly quickly once he arrives on campus. He has the ability to play both inside and outside receiver and the Trojans are likely going to be in need of some young players to step up quickly. USC could lose both Tyler Vaughns and Amon-Ra St. Brown following this season, while neither Drake London nor Bru McCoy look like five-year players. USC had a big haul of receivers in the 2019 class, but signed just two in the 2020 class and are already operating under the desired number of bodies at the position.

Ware-Hudson joins three receivers already committed to USC in this class, in Michael Jackson III (Las Vegas/Desert Pines), Quay Davis (Dallas/Skyline) and Josh Moore (Atlanta/Marist). Davis had been committed to Texas before pledging to USC, and Moore was a flip from Stanford, where he was going to play safety.

This is a two-fold win for USC, as any addition that also becomes a subtraction from Oregon’s conference-leading recruiting class is a good thing for the Trojans. It was also setting up to be an interesting year at wide receiver, as there are four elite prospects at the position and before Ware-Hudson’s flip, two were headed to Oregon and one each to Clemson and Michigan. Now, USC has a commitment from one, and another Mater Dei prospect as well, which is always an important factor for USC recruiting.