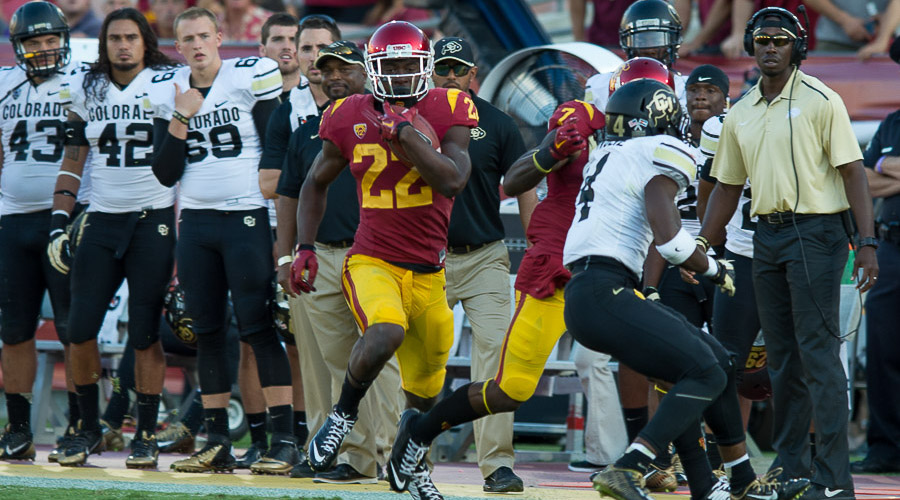 If recent history of Colorado visits to the Coliseum is any indication of what will happen on Saturday then Sam Darnold needs to make sure his throwing arm is ready because the last two times the Buffaloes have come to town (2012 with Matt Barkley and 2014 with Cody Kessler) the Trojan quarterback has thrown seven touchdown passes in the game.

While it’s certainly not impossible to think that Darnold could do the same considering his impressive play so far, it’s also not likely considering this is a different level of Colorado team than the ones who visited in those years.

This current edition of the Buffs is sitting with a 4-1 record and ranked #21 in the polls, with a road victory against Oregon under their belt along with a solid performance in a loss against Michigan in Ann Arbor. CU coach Mike MacIntyre has certainly changed the culture in Boulder in his fourth year and the results have shown with their best start since 2005.

The good news for USC – other than a 10-0 series record against Colorado – is that the Trojans come into this game with a jolt of confidence from their most complete game performance of the year, and energized by the presence of Sam Darnold as the starting quarterback.

Darnold will be going against a Colorado defense that is ranked 9th nationally in pass defense, and they are led in the secondary by CB Chidobe Awuzie (7 career interceptions). The Buffs are also 13th in the nation in total defense with a pair of solid linebackers in Kenneth Olugbode and Rick Gamboa. Both pass defense (150 ypg) and total defense (290 ypg) marks top the Pac-12.

The Buffs have seen good results in recent weeks on offense with a redshirt freshman quarterback of their own. They began the season with Sefo Liufau at quarterback and he was the school career leader in passing yards, completions and total offense) but Liufau suffered an ankle injury against Michigan, which opened the door for Steven Montez. All Montez has done is complete 68% of his passes while throwing 8 touchdowns against only 2 picks. He also averaging 5.8 yards per carry.

Colorado is 9th nationally in total offense (531 ypg) and they feature a pair of explosive wide receivers in Devin Ross and Shay Fields (a former USC commit who is averaging 21 yards per catch) along with a running back duo of Phillip Lindsay and Kyle Evans. It will be interesting to see if the Trojan defense can continue the momentum from last week when they were very effective in stopping the rhythm of a good dual-threat quarterback, because that’s what they will face this week as well.