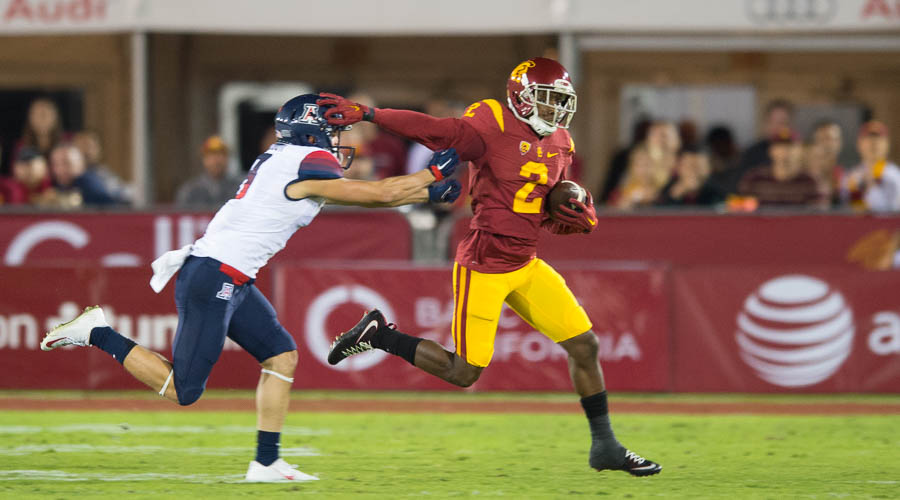 The Arizona Wildcats are struggling right now with 3 conference losses in a row (Washington, UCLA, Utah) while the Trojans are riding a bit of momentum with a pair of much needed back-to-back wins.

On paper, that makes for good timing for a USC visit to Tucson to hopefully carry over that winning play to get another victory before heading into the bye week, but this is USC vs Arizona and a rivalry that has seen 9 games in a row decided by 8 points or less. That really is a crazy stat when you think about it, one that stretches back to Pete Carroll and every coach since for the Trojans.

It should also give an indication that no matter how many injuries the Wildcats have in the backfield right now this could still turn out to be a tight game. After all, Rich Rodriguez and his team are down to their 3rd string quarterback and 4th string tailback, yet they are still putting up almost 450 yards per game. USC coach Clay Helton referred to Rodriguez in a media interview this week as the master of the RPO (run-pass option) that has been put in use by so many college teams, including the Trojans during the recent stretch with Sam Darnold at quarterback.

For the Wildcats, they entered the season with Anu Solomon as a multi-year starter at QB, one who is 3rd on the all-time school list in touchdown passes, but Solomon was hurt with a knee injury in the season opening loss to BYU and hasn’t played since. He was replaced by Brandon Dawkins, a local player from Oaks Christian who had an early USC offer in the recruiting process, and Dawkins has been showing well (leads team in rushing and passing) before an injury and the Cats were forced to turn to true freshman Khalil Tate, another former USC offer from Serra, to finish out the last two games.

Tate is a big guy who can run (and run you over) and he reminds me a little of former USC quarterback Jason Thomas in that regard. But still, for all of his talent, Tate is still a first-year player being forced into the line-up and it would be a big stage for him to step up against the Trojans. At this point it looks like Dawkins will be the expected starter.

Arizona also has injury issues at tailback, where Nick Wilson (the normal starter) has been hampered with an ankle injury of his own, and back-up true freshman J.J. Taylor (from Centennial) is out with a broken ankle too. They had rushed for over 200 yards in four straight games before seeing that streak snapped against Utah last week.

All of that could be troubling for Arizona (who has also seen injuries on the o-line) when facing a USC defense that has found the ability to provide pressure in recent weeks under Tucson-native Clancy Pendergast. The Trojans defensive front in particular will be looking to get into the backfield and cause havoc against the inexperienced Wildcats.

On the other side of the ball, the USC offense has been resurgent under Darnold at quarterback and this game figures to offer another opportunity to put up some passing numbers. The Trojans have been averaging 325 yards per game through the air with Darnold as the starter while Arizona is giving up 270 passing yards per game. USC currently has four receivers with over 20 catches a piece which shows good balance in spreading the ball around, although there could be a wrinkle this week for the offense if tailback Justin Davis misses the game, as expected, with a high ankle sprain. Arizona has given up more than 400 yards in offense for 5 consecutive games.

One area that will be worth watching is special teams, where Arizona has struggled while the Trojans have seen good results in all phases under John Baxter.