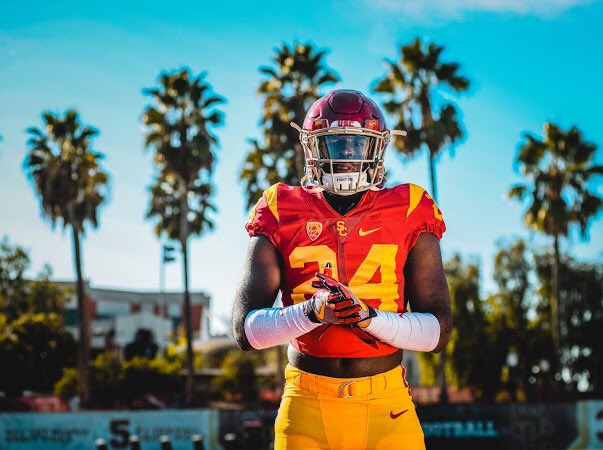 The USC Trojans picked up a massive addition to the 2021 recruiting class this afternoon, as four-star athlete Julien Simon announced his commitment.

The 6-foot-2, 220-pound Simon is the nation’s No. 99 overall prospect and No. 5 athlete. He has the ability to play linebacker, running back, safety or wide receiver in college, but he’ll head to USC as an inside linebacker. He said during his commitment that he ultimately made his mind up against two weeks ago.

“A lot of weight just dropped off my chest,” Simon said after announcing his commitment. “The most important things i was looking at in a school were academics, athletics and social life. I feel like USC, when you put those three things together, no other school is better than USC.”

“We already knew at that point he was going to be a pretty good player,” Matsumoto said, adding that he’d heard plenty about Simon before he even stepped foot on a high school field. “When he got here in ninth grade, he was everything as advertised.”

Simon played on both sides of the ball as a freshman for a playoff team, as Matsumoto said his football IQ made him an asset immediately. Matsumoto added that Simon is a very mature person for his age, even though he looks much older than he is.

That goes for Simon both on and off the field, as he has become one of the best two-way players in the country heading into his senior season. Julian is also a dynamic two-sport star, as he excels on the basketball court for Lincoln as well. As for football, after spending a majority of his time on offense as a freshman, Simon really came into his own as a defensive player in his sophomore year, when he played nickel cornerback for Lincoln.

Matsumoto said that looking back on Simon’s career to this point, that’s what stands out the most.

“How he really mastered the nickel position for us,” Matsumoto said, adding that he picked off five passes and returned four for touchdowns. “It was just ridiculous. He was smart and so savvy that he would bait a lot of those quarterbacks to throw it his way and pick it.”

Matsumoto said Simon realized then just how good he could be as a defensive player.

USC didn’t need to see him excel at one position. The Trojans offered Simon his first scholarship during the spring following his freshman season. The fact that they didn’t wait to make sure they knew exactly what position Simon would play at the next level was a benefit during the recruiting process. Demonstrating his versatility, of his final eight schools–Arizona State, Cal, Michigan, Oregon, Stanford, Texas, USC and Washington–he was still being recruited at inside linebacker, a hybrid safety/linebacker, and as a wide receiver.

As a junior, Simon rushed for 182 yards and seven touchdowns, caught 83 passes for 1,033 yards and 12 touchdowns, and recorded two sacks and four interceptions on defense.

“He can really do whatever you want him to,” Matsumoto said. “He’s that smart and that athletic…That athlete mentality has helped him because he’s kind of able to do anything on the field. It helps because he’s smart and he can learn it all, so we can put a lot of responsibility on him offensively and defensively. His football IQ is so good. He has a great nose for the football and it allows him to be a great athlete.”

This is a massive commitment for USC in this class. It is an absolutely terrific year for talent in Washington, and the Trojans have grabbed a commitment from the No. 4 player in the state. It could be the first time USC signs a top-5 player from Washington since getting Zach Banner and Max Browne in the 2012 and 2013 classes.

It also gives defensive coordinator and linebacker coach Todd Orlando an extremely versatile defender for the middle of his defense. With Simon and fellow four-star linebacker Ma’a Gaoteote (Bellflower, Calif./St. John Bosco) on board, USC has a chance to build a very strong class of linebackers. Four-star inside linebacker Ethan Calvert (Westlake Village, Calif./Oaks Christian) is still an uncommitted target, while the Trojans are likely to chase five-star LSU linebacker commit Raesjon Davis (Santa Ana, Calif./Mater Dei) all the way until he signs.

Simon is commitment No. 11 for the USC 2021 recruiting class, and moves it back to No. 5 in the class rankings.