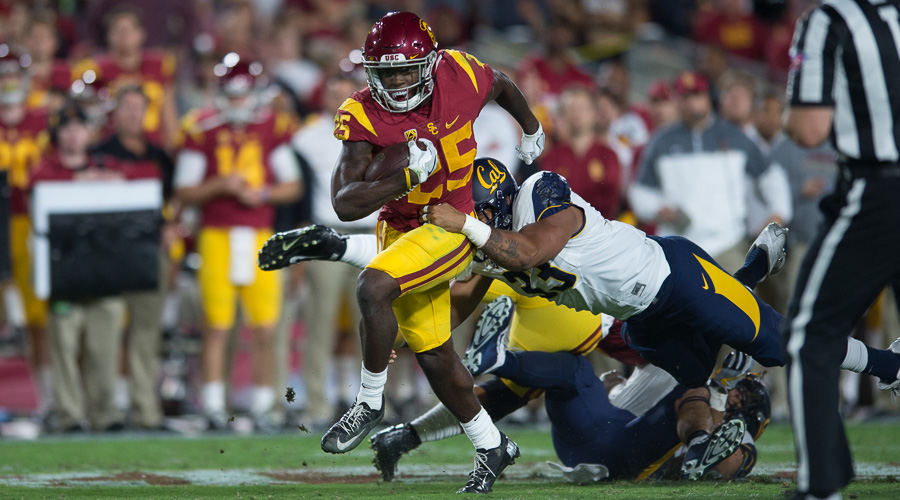 Entering the 2016 campaign, expectations were sky high when it came to the anticipated performance of USC tailback Ronald Jones II. Following a thrilling initial season on campus in which he racked up a team-high 987 yards on the ground, breaking Charles White’s 39-year-old freshman rushing record, it seemed a forgone conclusion that that the McKinney (Texas) North product would light up the stat sheet on an even grander scale as a sophomore.

But that isn’t what happened, at least early on – not by a long shot. Through the first six games of the season, in fact, Jones rushed for a total of 208 yards, and he just didn’t seem to be running with the same explosiveness that he did in Year 1.

Over the course of the last two games, however, the Ronald Jones of old has reappeared, and for the Trojans, it couldn’t have happened at a better time.

USC’s No. 1 option at the running back position, Justin Davis, has been sidelined for the last two games due to a high ankle sprain, thrusting Jones into the starting role.

With his workload increased dramatically, Jones has taken the opportunity and run with it – literally. After rushing for 71 yards and one touchdown against Arizona, Jones put on an absolute show in USC’s 45-24 victory over Cal last week, carrying the ball 18 times for a career-high 223 yards and one touchdown, while also making two receptions for 18 yards and another touchdown.

It was evident on his very first carry against the Golden Bears, which went for a 61-yard gain, that the burst in Jones’ step was back.

“I think he was really challenged over the last two weeks, and he knew that he had to be the guy,” said USC head coach Clay Helton of Jones, who now leads the Trojans with 508 rushing yards. “He had to put the team on his back, and you saw a little bit of it at Arizona. It was just like a ticking time bomb waiting to explode. After that first play of the game, I was like, ‘oh gosh. OK, here we go. He looks like the wild horse again.’”

So what exactly happened between the early portion of the schedule and now? For one thing, there are the added reps, which have allowed Jones to find his footing again.

“It’s great,” said Jones, who stands 6-foot-1 and 195 pounds. “It does a lot for your confidence when you’re able to get in a rhythm and you get in the flow of the game. You just see things better.”

But there’s a lot more to it than that. According to USC running backs coach Tommie Robinson, the biggest factor of all is Jones’ health. While he never missed any actual games, Jones was hampered by a rib injury as well as a thigh contusion early on this season.

“You know, at the beginning of the season RoJo was really never 100 percent healthy, but he’s getting healthy now,” Robinson said. “It’s very fortunate that he got healthy when he did because Justin gets an injury, and it’s next man up. So, RoJo was the next guy up, and he was healthy and he was able to go in and do the things that he needed to do to help this team win.”

And while it’s his ability as a ball carrier that has undoubtedly caught everyone’s attention as of late, the strides that he’s made in regard to some other facets of his game have been equally as eye-catching.

He’s made obvious improvement in terms of his pass-catching skills, but even more noticeable has been the way that he’s progressed as a blocker in pass protection – something he struggled with in the past.

“He wasn’t into all that protecting stuff,” Robinson said. “The kid is a natural runner, and running the football comes easy to him, but all of the other things that go into being a great running back, RoJo is starting to work on those things, and little by little, every day he’s gaining ground and he’s getting better and better.”

In terms of his renewed success rushing the ball, it’s safe to say that he’s had some help in that department, first and foremost from a Trojans offensive line that has really come together in recent weeks.

“When you get great blocking, and you’re able to get runs like that, your confidence definitely goes up,” Jones said. “They know their assignments and they make my job look easy, so I can just run the ball.”

Also aiding in his development and overall performance has been the atmosphere of competition that exists within a USC tailback corps that, in addition to Davis, also includes fellow sophomores Aca’Cedric Ware and Dominic Davis.

A unit that is close both on the field and off, they’ve established themselves as one of the real strengths of the USC offense this season. The elder Davis was the Trojans’ leading rusher prior to his injury. Ware, meanwhile, like Jones, has taken advantage of the extended reps that have come his way as of late, rushing for a career-high of his own against Cal of 130 yards.

“We’re always trying to make each other better,” Jones said. “If Ced leaves money on the field, I’m going to let him know about it. Same thing with Justin, he’s not going to let anybody slip.”

With it looking more and more likely that Davis will be sidelined, once again, when USC faces Oregon in the Coliseum on Saturday, and Ware’s status now up in the air as well after suffering an ankle injury during practice on Tuesday, Jones could be called upon to shoulder even more of the load in the contest.

But having finally picked up where he left off as a freshman, and then some, it’s a challenge that he appears to be more than up for.