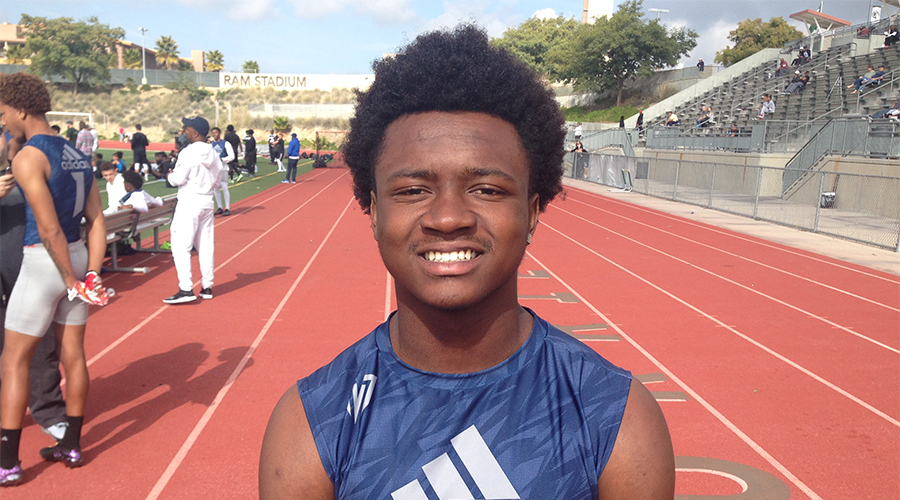 When Class of 2018 star athlete Marcus Johnson (Los Angeles, Calif./Hawkins) committed to the Trojans this past December, he made the decision without any doubt in his mind. And now with his brother, Greg Johnson, having inked with USC last Wednesday, not to mention a close friend and teammate in Joseph Lewis as well, he says that he’s even more confident in his pledge.

“I’m even more committed to SC now,” Johnson said. “I love the coaching staff. Every time I talk to the coaches there’s something new that makes me feel even better about my decision. And now that my childhood friend, Jody [Lewis], and my brother are going there it makes me feel even more comfortable because I know I won’t be alone. I’m just really ready now, and I’m anxious to get up there.”

Johnson got an even closer look at what USC has to offer when he accompanied his brother up to campus for a portion of his official visit, and it’s safe to say that it left a lasting impression.

“It was great,” said Johnson, who is in regular contact with USC head coach Clay Helton, offensive coordinator Tee Martin and defensive backs coach Ronnie Bradford. “I was just enjoying the experience, and seeing everything they did, it just made me feel even better about the whole situation. Everything was perfect, just how I pictured it to be.”

And as signing day grew closer and closer for his brother, who was committed to Arizona at one time, Marcus didn’t hesitate to let him know where he thought he should sign in the end.

“At first he was still committed to Arizona, so I really didn’t press him, but once the situation changed and he de-committed, that’s when I started talking to him more and more about USC,” Johnson said. “Everything just fell into place and it worked out.”

And Johnson’s role as a recruiter for the Trojans isn’t over. Part of a Hawkins program that is filled with elite talent, including fellow Class of 2018 stars like safety Aashari Crosswell and wide receivers Jalen Hall and Eric Fuller (Nebraska commit), Johnson plans to get in the ear of plenty of his teammates in the coming months, and he’s confident that more than a couple of them will be following the lead of his brother and Lewis to USC.

“I do think it’s the start of a pipeline from Hawkins to SC,” Johnson said. “I know there are definitely some other guys in the Class of 2018 that I’m going to bring along with me, so be ready.”

An outstanding all-around athlete, Johnson lined up almost exclusively on offense at tailback and receiver this past weekend for Premium Sports at the King of the I.E. 7-on-7 tournament in Murrieta, but he made a major impact in all three phases of the game for Hawkins this past season. As far as the Trojans staff, meanwhile, Johnson believes they envision him lining up at cornerback, but that isn’t completely set in stone.

“They’ve mostly talked about corner, but I do talk to Coach Martin a lot, so I’m not totally sure,” said Johnson, who stands 5-foot-10 and 165 pounds. “But I know that wherever they put me I’ll be able to perform and make an impact.”

Johnson will continue to play in a number of 7-on-7 tournaments with Premium Sports throughout the spring, and he has definite plans to participate in the Rising Stars Camp at USC later this offseason as well. He also hopes to take some unofficial visits with his teammates, as well as some official visits in the fall, “just to enjoy the experience,” he said, before adding “I’m 100 percent solid with SC.”

And the Rising Stars Camp certainly won’t mark the only time that he’ll be up at USC in the coming months. Already known to be a frequent visitor to campus as well as to the Coliseum for Trojans football games, he plans to be a near constant fixture there once his brother moves in this summer – a factor that figures to further cement his standing with USC.

“I’m going to be up there a lot,” Johnson said. “I just want to get a feel for it so when I go there I’ll have a head-start and I’ll be ready to do what I need to do. I can’t wait.”