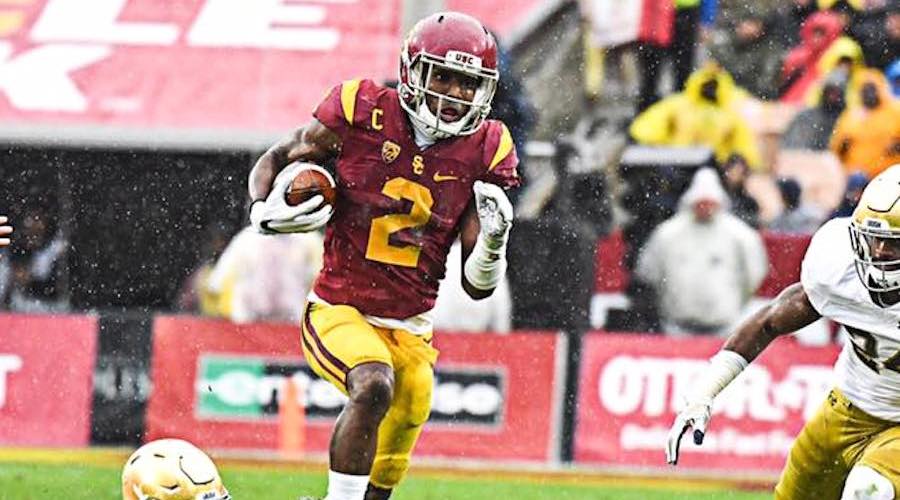 Neither the rain, nor the Fighting Irish could slow down Adoree’ Jackson on Saturday as the dynamic playmaker put on an absolute show, scoring three different ways in a 45-27 victory over rival Notre Dame inside the Coliseum.

Not everything went the Trojans way, however, particularly early on. With USC (9-3 overall, 7-2 Pac-12) holding a 3-0 advantage, Notre Dame (4-8) running back Josh Adams ran up the gut and found daylight for a 74 yard-gain before Jackson pushed him out at the one-yard-line. One play later quarterback DeShone Kizer punched it into the end zone, and Notre Dame had a quick 7-3 lead.

But USC would answer on the team’s very next drive, with Ronald Jones II (16 Rush, 134 Yds) busting loose for a 51-yard touchdown run to put the Trojans back in front, 10-7.

With the rain starting to pour at that point, and both offenses sputtering, that’s how it would remain until under two minutes left to go in the half when USC really broke the game open, thanks in part to Jackson.

The junior cornerback/receiver fielded a punt and raced off for a 55-yard touchdown. Then, on Notre Dame’s ensuing drive, USC defensive back Ajene Harris picked off a Kizer pass outside and returned it for a 33-yard touchdown, and all of a sudden the Trojans had a commanding 24-7 heading into the half.

Following one of the very few mistakes that Jackson made on the day, a fumbled punt return that Notre Dame recovered, the Fighting Irish were able to make it a 24-14 game early in the third quarter after Kizer hit Chris Finke for a 14-yard touchdown pass. Jackson made up for his error in a hurry, however, taking a quick pass outside on USC’s ensuing drive and darting down the sideline for a 52-yard touchdown.

And Jackson wasn’t done. Following another Fighting Irish touchdown, The Gardena (Calif.) Serra product made a dazzling 97-yard kick return for a touchdown – hurdling a Notre Dame defender at one point – to put USC in front 38-21.

USC quarterback Sam Darnold, who completed 19 of 30 passes for 205 yards, would cap the Trojans’ scoring off with his second touchdown pass of the game, a two-yard toss to JuJu Smith-Schuster (4 Rec, 23 Yds).

For Notre Dame, Kizer completed 17 of 32 passes for 220 yards and two touchdowns with one interception. Adams had 17 carries for 180 yards.

With the win, the Trojans have reeled off eight consecutive victories, and they now await the result of tonight’s Colorado-Utah game. A Utes victory would put USC in the Pac-12 Championship Game for a Friday night matchup against Washington at Santa Clara’s (Calif.) Levi’s Stadium.