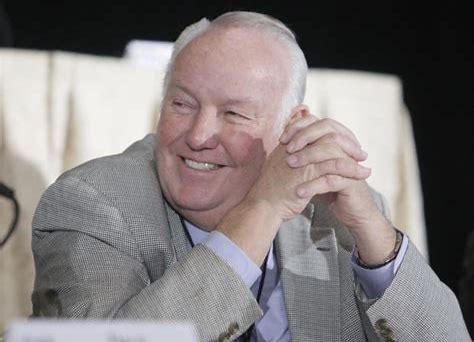 Say what?: You might have missed it, but there was shock and informational confusion inside the John McKay Center this past week when it was learned that former Trojans’ Hall of Fame head football coach John Robinson (photo above) and highly respected USC Director of Athletic Security Rick Carr were informed by Trojans’ athletic director Lynn Swann that their positions were being eliminated for apparent financial considerations. Or was it for financial considerations?

Say what? – Part 2: Was the elimination of Robinson’s and Carr’s salaries going to be a big cost-efficient saver in the athletic department budget? Were budgets not evaluated prior? So many questions, but apparently Lynn Swann wanted expediency. All these uneasy downsizing and unanswered questions coming the week before new USC president Carol Folt takes command on Monday.

Robbie: There are conflicting reports whether John Robinson was released through budget downsizing or a self-imposed retirement. If the coach was retiring, why has there been no formal announcement either by USC or by Robinson himself? For the record, JR’s job title was Heritage Initiative Chair. Even if he didn’t retire voluntarily, shouldn’t there be some sort of announcement for such a high-profile, beloved, and loyal cardinal and gold athletic figure? No recognition of his valued USC career and accomplishments?

More Robbie: The Trojans’ former head football coach, now in his 80s, is still very much admired among the USC family and community. Everybody still loves hearing Robinson’s “good old days” stories from the McKay era, JR’s own cardinal and gold head coaching career, and his views on today’s Trojans and college football in general. Robinson recently has been an analyst on various national radio broadcasts of premier college football games.

Last add Robbie: He may or may not still be on the USC payroll, but isn’t there something that John Robinson can still do in sort of a Tommy Lasorda role of campus ombudsman? The Trojans could do for Robinson what the Dodgers have done with former Hall of Fame manager, who is now in his 90s, but still shows up at Dodger Stadium and routinely receives loud and standing ovations.

Driving the Carr: A lesser known figure being given a pink slip was Rick Carr, as previously mentioned director of athletic security. A longtime employee with an impeccable record of competence, Carr was probably best visible to USC fans as the “guy that runs on the field next to whoever is the Trojans’ head football coach.” Dating back to the Larry Smith era, Carr, a former detective with the Torrance Police Department, was instrumental in many areas of the law, as it pertained to all student-athletes at Troy. Respected by coaches and players, it was a total shock in the department that Carr had his job eliminated by Swann.

More Carr: At a recent 60th birthday party, the respect for Rick Carr was illustrated when former Trojans’ head football coach Pete Carroll was featured in a birthday greeting video. If you look back at all the various incidents involving USC student-athletes, chances are Rick Carr was trying to sort things out between fact and fiction before the wheels of justice stepped in and probably the media, as well. However, don’t consider Carr a fixer of situations, he wasn’t. He was one straight arrow and certainly not “a fixer.” Carr’s responsibilities went well beyond the perception that he was an advocate for Trojan student-athlete misdeeds or athletes just plain needing direction. At this time of the calendar year, Carr was also known to have been in charge of making sure that Clay Helton’s football players had their proper TSA security flight papers in order to expedite airport check-in for away games.

Last Carr: The dismissal of Rick Carr appears murky at best. What isn’t murky is that Carr – to our knowledge – was the ultimate good soldier and his love for USC was never in question nor was his job performance. Coaches of other sports besides football were Carr supporters of his work and dedication. With football season just six weeks away and with all things that needed to be done in advance of the official opening of training camp, the timing of Carr’s dismissal is curious at best. Why now with football season just six weeks away? Doesn’t that put undue new responsibilities upon inexperienced others in the athletic department to pick of up the slack that Carr apparently leaves behind?

The big question: Since answers to the above questions have not yet been forthcoming and given Rick Carr’s visibly associated with football program, it makes one wonder whether Clay Helton was aware of Swann’s move so close to the season? To my knowledge, Helton was very appreciative of Carr’s work with his team. Of course, this brings up another question: Was Helton in charge of Carr or was there another administrator overseeing Carr’s job? Hopefully in time, all these questions will be answered for public consumption. Right now, it raises more than a lot of eyebrows regarding Swann’s decisions.

The welcome mat: The timing of the Robinson/Carr edict is quite curious as mentioned because of new USC president Carol Folt taking control on Monday, and she is expected to begin the process of rehabilitating the current USC academic issues, lingering jurisprudence matters, and, of course, the highly scrutinized athletic department. She obviously has her work cut out for at the get-go.

Welcome mat – Part 2: On a side note, WeAreSC welcomes President Folt, and we’ll see how long it takes for her to begin addressing the concerns that are apparent in the Trojans’ athletic department.

Programing note: If you haven’t had a listen, this week’s WeAreSC podcast, hosted by publisher Erik McKinney, features two informative interviews with recent USC offensive line commits Andrew Milek (6-foot-6, 295/Phoenix Brophy Prep) and Joey Wright (6-7, 297/Reno, Nev. Bishop Manogue). Both discuss the recruiting process with the Trojans and how they arrived at a cardinal and gold commitment. Check it out: https://wearesc.com/wearesc-podcast-ol-commitments/

Did you know: Statistically speaking, the leading returning 2019 Pac-12 quarterback is Stanford junior KJ Costello (272.3 yards per game). You might be surprised to learn that last season Trojans’ sophomore quarterback JT Daniels was right behind Costello in passing yardage per game at 242.9.

IMHO: I’ll get more excited about the future class of linemen if or when they are pre-ranked as 4-stars prospects. Not saying that a 3-star can’t become elite, but seriously folks, when was the last time the Trojans got a 5-star offensive lineman? Okay, how about a 4-star?

Workout warrior: One Trojan defensive lineman that really looks buffed in the off-season is sophomore Jacob Lichtenstein, the developing lineman from Weston, Florida. Jacob is listed at 6-5, 270 but he certainly looks bigger.

Keep an eye: Understandably, much of the attention for 2019 is on the Trojans’ highly inexperienced secondary. While true freshman corner Chris Steele has gotten a lot of publicity over his transfer from Florida, pay attention to redshirt freshman Chase Williams, who played in four games last season (started against Notre Dame) and has taken advantage of the new NCAA new redshirt rule of playing in four games or less, thus maintaining a season of eligibility.

Perception is reality: Judging by recent viewing of the physical nature of the 2019 Trojans, it looks like new strength and conditioning coach Aaron Ausmus is making some progress.

To be missed: I, for one, will miss Salute to Troy, which has been replaced by a Cardinal and Gold Game (AKA public scrimmage) on Saturday, Aug. 17, in the Coli. Obviously, Salute to Troy attendance has been shrinking in recent times. At its best, Salute to Troy was at its attendance zenith when the Trojans were the toast of the college football world. Of course, it didn’t hurt that former USC head coach Pete Carroll was a masterful master of ceremonies and by his enthusiasm and charisma turned the preseason outdoor dinner/program into a not-to-miss campus event.

A reminder: Thanks to a mention by a WeAreSC message board reader, it should be noted that the Rams game against the Dallas Cowboys on Aug. 17 will be played in Aloha Stadium on Oahu, Hawaii. It means there is no conflict on Aug. 17 with the Trojans holding their new-fangled Cardinal and Gold game (AKA scrimmage) in the renovated Coliseum. Depending on the drumbeat of the new scrimmage idea, the attendance should be another indication of where Trojans’ fans enthusiasm resides.

Mr. Optimism: One Trojan insider – think John McKay Center – believes the Trojans have a chance to be 5-1 in its first six games…provided they beat Fresno State in the season opener on Aug. 31. By the way, it was never mentioned where the lone loss would come.

Those were the days: I really miss Julie’s Trojan Barrel, a local watering hole that was once a hangout after practice for legendary coach John McKay and his staff. Julie’s was located near the corner of Exposition and Figueroa. No kidding, McKay actually had his own booth reserved for him during his glory days, and it was not unusual for McKay to also be surrounded by some of his favorites print media types.

The last word: Stuff is really happening in the renovation of the Coliseum. Take a look at the latest real time Coliseum renovation camera view: https://app.oxblue.com/open/usc/lacoliseumrenovation