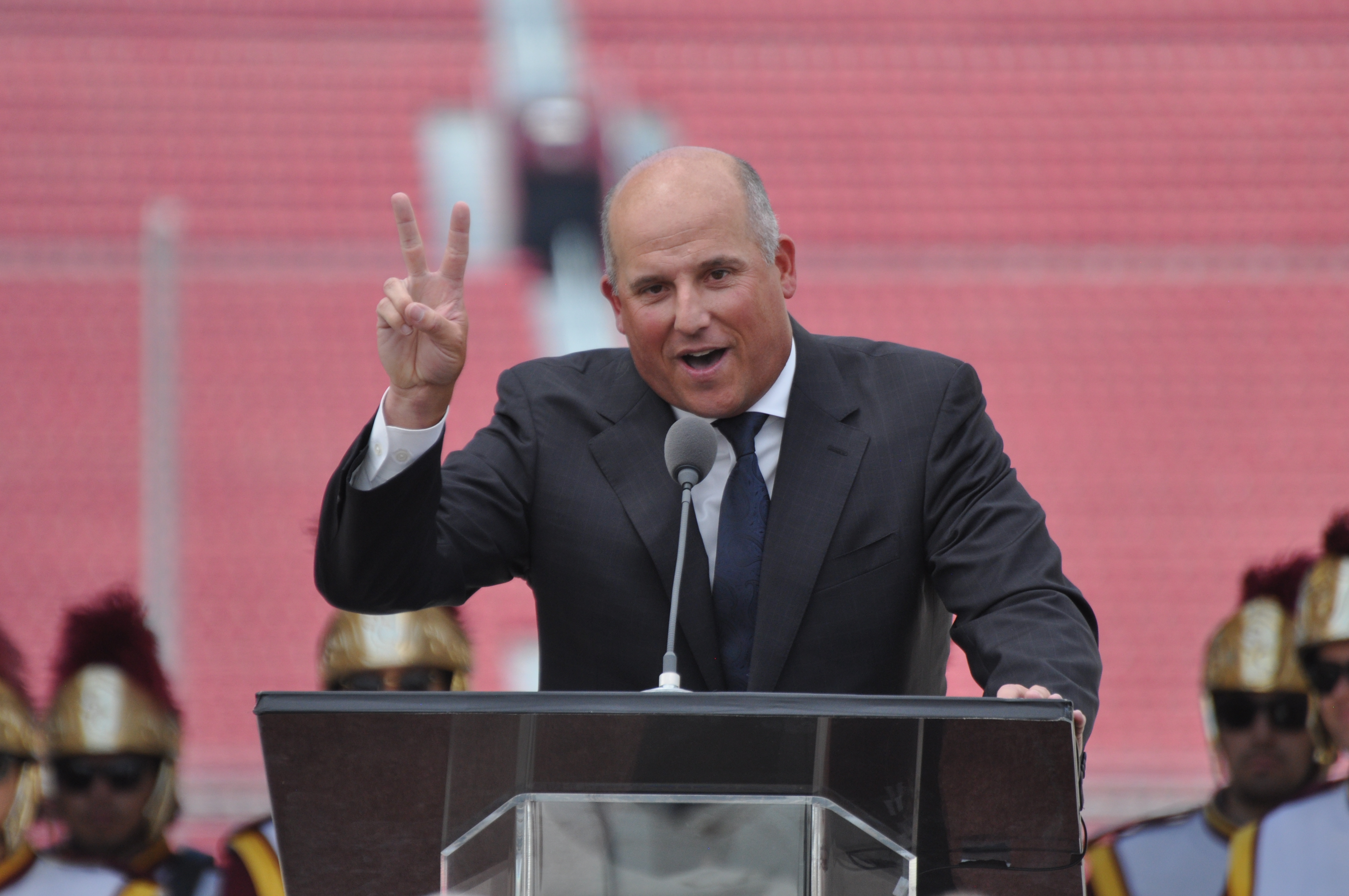 Hope or predicament: As recently as the conclusion of this past COVID 2020 season and in this weekend’s Los Angeles Times Q&A, USC head football coach Clay Helton (photo above) said that success of a Trojans football coach is evaluated in championships – like Pac-12 and national championships. Heading into what is expected to be Helton’s 6th full season at the helm, the coach has one conference title (2017), a 1-2 bowl record, no College Football Playoffs appearances in CFP format’s seven-year existence, and a combined 18-13 record the past three seasons. Does that translate into euphoric hope or an unabashed predicament?

Hope or predicament – Part 2: In the Times Q&A, Gentleman Clay said, “I see a program that just went to a championship game, that has made some investments in key areas. I actually see this program trending upward, if you look at it correctly.” One could question if Helton is looking at the program correctly based on no championships the past three seasons, which includes the aforementioned 18-13 record. Then again, you could look at the current Trojans recruiting effort and make a case for a positive future personnel wise…especially if the Trojans recruiting Class of 2022 can match this season’s recruiting efforts. Does that translate into hope or a predicament?

Hope or predicament – Part 3: The recruiting Class of 2021 is arguably a Top 10 class with many of the headliners on the defensive side of the ball. In the Times Q&A with beat writer Ryan Kartje, when asked about the current USC offense and philosophy, Coach Helton said, “When you look at what this offense can be and what it can do, I believe in this offense. I believe in Graham Harrell and what he’s about and how talented he is at what he does. We’ll continue to make the improvements needed to be the best offense in the country.”

Hope or predicament – Part 4: It should be assumed, IMHO, that when the coach is talking about being the best offense in the country, he is taking into consideration the proven balanced offensive powerhouse levels of an Alabama, Ohio State, and Clemson. That’s a a real challenge when you were last in 2020 Pac-12 team rushing, which reflects poorly on offensive line recruiting, coaching, and a glaring lack of obvious offensive balance and philosophy. Hopefully, Trojans athletic director Mike Bohn is in agreement with the goal of having the best offense in the country. Does that translate into hope or a predicament?

Hope or predicament – Part 5: With so much scrutiny on offensive line recruiting and the recent firing of O-line coach Tim Drevno, Helton still feels positive about the future. The coach told the Times, “When you look at the list of what’s coming back on that offensive line, you feel pretty darn good.” Does that translate into hope or a predicament?

Hope or predicament – Part 6: The question before Trojans fans and the athletic administration is should a head football coach who doesn’t consistently win championships be retained because of past, present, or future recruiting success? Is the fear of losing a potential or signed recruiting class inoculate a head football coach from getting fired? IMHO, especially at USC, it shouldn’t. Traditionally, USC has always had very good to great recruiting classes with the exceptions being few and far between like the Class of 2020. Does that translate into hope or a predicament?

Class of 2021 still rising: By all accounts, the recent announcement by the nation’s top recruit for the Class of 2021, defensive end Korey Foreman, inserted the Trojans into the nation’s top 10 recruiting rankings with the prospects of climbing higher if Santa Ana (Calif.) Mater Dei linebacker Raesjon Davis signs with the Trojans in February. Davis has narrowed his final four choices to LSU, Ohio State, Oregon, and the Trojans.

Offensive linemen still an issue: To jog your memory, in the recruiting cycle for the Class of 2020, one of the worst USC recruiting classes in memory, it was the offensive side of the ball and the offensive linemen signed that drew intense scrutiny. By all accounts, the quantity of quality brought tremendous concern for the future since there were no 5-star linemen, one 4-star, and the balance 3-star linemen. This lack of recruiting highly ranked offensive linemen is part of the reason that Tim Drevno is no longer the O-line coach and another reason that Helton remains under intense scrutiny.

A bottom line: All of which returns to the original question: Should Clay Helton be retained on the success of the recruiting Class of 2021 or should he be retained so not to lose a recruiting class in spite of the record on the field, which is not a passing grade if things are truly judged by Pac-12 and national championships.

The Bohnmeister:  In a recent Los Angeles Times column by J. Brady McCullough, it was suggested that maybe – if he is restricted from changing his current head football coach – Trojans athletic director Mike Bohn is building a positive infrastructure to surround Clay Helton or is continually laying plans for the next USC football coach.

Ground 0: In what appears to be a USC first, incoming Trojan defensive end Korey Foreman will apparently wear jersey No. 0, thanks to a spring move approved by the NCAA to cut down on players on the same team wearing the same number.

Remembering Alex: All-America Alabama offensive tackle Alex Leatherwood was named the recipient of the 75th Outland Trophy as the nation’s best lineman, and the relevance for USC fans is that at one time Alex was on the USC campus for the Rising Stars Camp during his high school days. I saw Leatherwood on Howard Jones/Brian Kennedy Fields, and he was one of the most physically mature high school players I have ever seen.

Famous last words: The Trojans recently announced that Aaron Ausmus will not return in 2021 as USC’s strength and conditioning coach. When Clay Helton hired Ausmus in 2019, the coach said, “I’m very excited to bring Aaron Ausmus back to USC. Aaron has won a national championship here under Pete Carroll in 2003.”

Famous last words – Part 2: Adding to his thoughts on hiring Aaron Ausmus as strength coach in 2019, Clay Helton also said, “I’ve watched him lead two SEC programs. I watched him take a 2010 team when he came back to USC and in a year create one of the better teams in college football with that 2011 team. Great to have him back and with the staff that he’s putting together, I know we will produce a great football team in 2019.”

Famous last words – Part 3: For the record, the 2019 Trojans finished with an 8-5 record, which included the forgettable 49-24 loss to Iowa in the Holiday Bowl.

The Godfather: Longtime USC super supporter and WeAreSC.com contributor Bruce “The Godfather” Bagni recently submitted a poignant and truthful, IMHO, assessment of the Trojans current football program status. It is worth the read, and if you haven’t had a chance to read it, “When is enough, enough?”, here’s the link: https://wearesc.com/forum/index.php?threads/when-is-enough-enough-from-bruce-bagni.77099/#post-1170404

The surge: The USC athletic ticket office is contacting fans regarding their interest in USC football tickets for next season. The response I am hearing is that loyal fans are bluntly telling those USC phone reps that they aren’t going to pursue tickets until they see a true commitment to the football program through a change in head coach and a bigger commitment from Dr. Folt and Mike Bohn. From what I am told, fans are being somewhat respectful to the phone reps regarding the situation. Bottom line: No money for tickets unless a head coaching change is made.

FYI: In case you missed it, former Trojans QB JT Daniels announced he would be returning to Georgia for the 2021 season.

Caller No. 1: Mr. Katz, are you confident the Trojans will hire a good offensive line coach?

Caller No. 2: Greg, do you expect that the Trojans will run the ball more and effectively in 2021?

Caller No. 2, well, I think we may be told that the Trojans are going to emphasize this spring of having a more productive running game (Aren’t we told that every Clay Helton spring?). However, I will see it to believe it when games are actually played. We’ve heard before that the Trojans are going to be physical on the offensive line and running the ball will be efficient. Didn’t we hear Graham Harrell sing the praises of the offensive line before and during this past season? The hard fact: The Trojans finished 2020 last in Pac-12 rushing.

Caller No. 3: Katzman, what do you think of Korey Foreman wearing No. 0 for games?

Caller No. 3, it makes no difference to me what number he wears as long as he lives up to the hype. It will be interesting, however, to see how Korey is used and how fast he starts by defensive coordinator Todd Orlando.

Caller No. 4: Sir, do you think the Trojans will dip deep into the NCAA Transfer Portal for offensive line help?

Caller No. 4, I don’t think the Trojans have much choice. The Trojans have done it before in case you’ve forgotten former Tennessee grad transfer Drew Richmond, who started at right tackle in 2019. It figures the Trojans might be looking for help at both tackle spots, but who knows what movement will be made until Clay Helton names an offensive line coach, which may not come until after the college and NFL seasons are completed.

Caller No. 5: Greger, when this whole COVID situation is contained or everybody is vaccinated, where would you like to go for a vacation?

The last word: Monday night is the CFP Championship Game between Alabama and Ohio State. Right now, and not shocking the world, my pick is Alabama. The Crimson Tide are a beautiful blend of a balanced offense between passing and running – as is Ohio State – but the Crimson Tide has the better running attack. Both teams are a reminder of what the Trojans once were and hope to be.