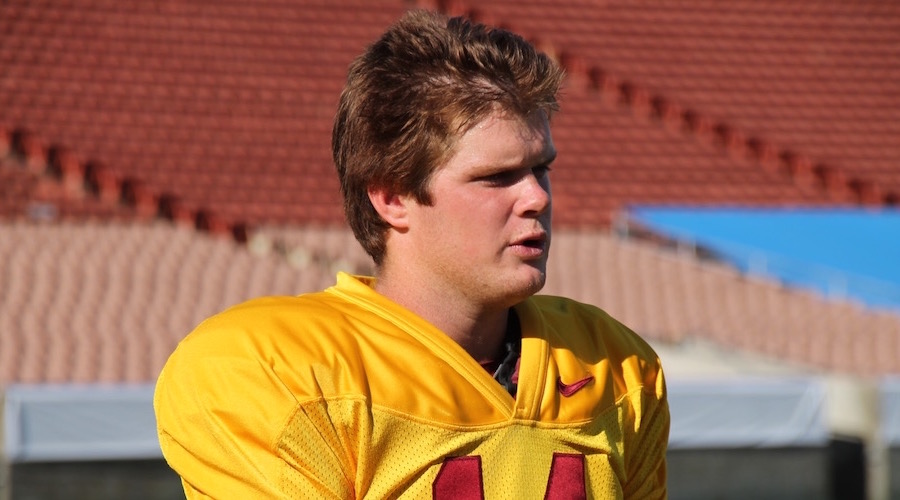 The fine line: USC Trojans head football coach Clay Helton has repeatedly said he’s a one quarterback guy, but after doing the expected – naming junior Max Browne over precocious redshirt freshman Sam Darnold (photo above) as his 2016 starting quarterback – Helton raised more than a few eyebrows when he also announced, “Though we will not rotate quarterbacks, we do envision using Sam’s unique athletic skill set for special situations throughout games this season.”

Fine line – Part 2: Last time I checked, there are a lot of special quarterback situations tailor-made for Darnold during a game, and the fact that Clay Helton used the plural term “games” lends me to believe that the head coach is fully aware of Darnold’s potential as a future Heisman Trophy candidate. It also makes further sense not to let Darnold just sit on the bench and let the gifted one become a game charting staffer. Based on the difficulty and physical nature of this season’s schedule, Helton wisely wants to take advantage of Darnold’s gifts, allow him to gain some valuable playing experience, and give a disappointed quarterback plenty of motivation to be ready when called upon.

The reiteration: Helton’s comments on Sam Darnold’s new specialist quarterback role are especially interesting considering the head coach on Friday said, “I’m going to name one and allow that guy to be the guy.”

IMHO: Let me first say that I believe that Clay Helton, with input from his staff, made the right choice for all the right reasons, which also included being politically correct. The potential fallout by naming Sam Darnold as starting quarterback would have not only opened the obvious possibility of Browne’s immediate transfer, but all future credibility in Helton’s quarterback recruiting. It would have been an opponents’ recruiting feeding frenzy for future quarterback recruiting battles.

IMHO – Part 2: You can just imagine the negative recruiting rhetoric pointed at the Trojans and Clay Helton if Darnold had been selected the Trojans quarterback. “Why go to USC? Look what happened to Max Browne. He waited his turn for three seasons being the good soldier and never got his shot. That won’t get you to the next level. Think about it, Browne was even recruited by Helton. Are you willing to take a chance on trusting what this guy is telling you? Good luck with that!”

The announcement: Give credit to Clay Helton for adjusting his quarterback announcement schedule. Helton provided a humanitarian gesture for the Browne and Darnold families by making the announcement on Saturday rather than making them twist in the wind until the originally scheduled Sunday announcement.

Tough call: Although Max Browne was always the quarterback to beat, the fact that Sam Darnold was so good, so fast, and at times better than Browne made Helton’s decision even the more agonizing in terms of the evaluation. Helton had said earlier that he didn’t expect Darnold to be as good as he is so fast. And don’t forget, Helton personally recruited both quarterbacks and their families as the Trojans former quarterback coach.

The impatience game: Despite making the best of a good situation, Clay Helton will have Trojans fans guessing and eagerly awaiting when Sam Darnold will be inserted into a game, and if Darnold performs to potential in those “special situations,” you can bet Trojan fans will be eagerly awaiting the call to Darnold.

Another perspective: It’s interesting to note that two of the Trojans biggest foes this season, Stanford and Notre Dame, are beginning with a two-quarterback rotation. Notre Dame coach Brian Kelly said Wednesday that quarterbacks DeShone Kizer and Malik Zaire will both play in the Fighting Irish’s opener at Texas on Sept. 4, and Stanford’s David Shaw says he will do the same if needed with sophomore Keller Chryst and redshirt freshman Ryan Burns. Shaw said at Pac-12 Media Day he has no problem with a two quarterback system and let the chips fall where they may.

A Texan commit: While the headlines on Saturday were understandably spotlighted on the announcement of Max Browne, “quietly” defensive tackle James Lynch (Round Rock, TX/Round Rock), a former TCU pledge, made his commit on Twitter. Lynch (6-4, 273), whose father attended the University of Nebraska, says that watching Pete Carroll and the Trojans always put a special place in his recruiting heart for the Trojans. FYI, the kid with the fire engine red hair performed this summer at The Opening, so he’s not exactly a throw-in.

Sunshine pumper: As may have already read here on WeAreSC, defensive lineman Jacob Lichtenstein (Cypress Bay HS, Ft. Lauderdale, FL) has also committed to the Trojans and the Class of 2017. Although not considered a five-star or even a four-star recruit, what makes this commitment noteworthy is that he said he committed in part to Trojans first-year defensive line coach Kenechi Udeze.

Sunshine pumper – Part 2: While there will be a segment of the Trojans recruiting fan club wishing that Jacob Lichtenstein (6-5, 245) and James Lynch had more “star” power, keep in mind that former Trojans All-American and NFL performer Kenechi Udeze was considered a project coming out of Los Angeles Verbum Dei. Udeze is living proof how good coaching (Ed Orgeron) and player dedication can turn a diamond in the rough. It will be interesting to see how Kenechi develops Lichtenstein and Lynch over the course of their careers.

Bowled over: When you think about how tough the Trojans schedule is this season and begin to freak out about the potential wins and losses, just remember the Men of Troy are playing 11 teams that went to bowl games.

IMHO: I guess I am just old school, but to me there are way too many bowl games. Bowl games should be a reward for outstanding seasons – not a reward for being 7-5 or even 8-4. It’s all about TV money and satisfying alumni, but at USC it should be Rose Bowl, major bowl game, CFP or bust.

Memory jogging: The Trojans open the season in Arlington, Texas, and the last time the Cardinal and Gold paid a visit to the Dallas-Fort Worth Metroplex area was the 1995 Cotton Bowl against Texas Tech in which the Trojans and former Trojans All-America receiver Keyshawn Johnson destroyed the Red Raiders 55-14.

Monetary physicality: One of the greatest fears when USC plays Alabama is that the Crimson Tide will be that much more physical than the Trojans. Alabama swears by its strength and conditioning coach Scott Cochran. This past June, Cochran was given a $105,000 salary increase, which brought his earnings to $525,000, more than some Group of 5 head coaches.

Fountain of youth: Will somebody please explain to me how Clay Mathews, the former Trojans 1977 All-America linebacker, still looks like a senior at USC? In town for Friday night’s Salute to Troy and a football alumni club reunion, Mathews must know some of the descendants of Ponce De Leon. Whatever Clay is drinking, send me a carton, please.

Congrats: It was announced this week by head coach Clay Helton that “former” walk-on players FB Reuben Peters, DB Matt Lopes, and TB James Toland lV were awarded scholarships for this season. All three have played well above your typical “walk-on” perception, and you might even hear their name(s) called against Alabama.

Academic green light: When you have as many football players in a program, it stands to reason that somebody may become ineligible. Well, congrats to Dr. Magdi El Shahawy, senior associate athletic director, and his staff for achieving every player being eligible for the 2016 season.

Remembering a great one: My first USC Rose Bowl Game was the 1963 thriller that featured Wisconsin quarterback Ron Vander Kelen. Vander Kelen, who passed away this past week at 76, caught fire in the second half and the No. 1 Trojans had to hold on for dear life as “Rifle Ron” almost led his No. 2 Badgers to an upset of John McKay’s eventual national champions. The 42-37 Trojans victory over Wisconsin is considered one of the all-time Rose Bowl classics.

The Greatest: The Trojans have played against famous opponent legacies in the past, so Trojans fans prepare yourself for the future competition arrival of Biaggio Ali Walsh, the grandson of Muhammad Ali, who has committed to Cal. The grandson of the late Greatest currently attends powerhouse Las Vegas Bishop Gorman.

The last word: Now that we’ve gotten the official announcement on the Trojans quarterback situation, the depth chart – expected to be released sometime Sunday – figures to be food for thought. Clay Helton thought he might be able to release the depth chart on Saturday, but apparently the competition for positions like left guard, nose tackle, linebacker, and perhaps a secondary position were not as obvious as the QB selection. So, we wait for the white smoke to rise above the John McKay Center.