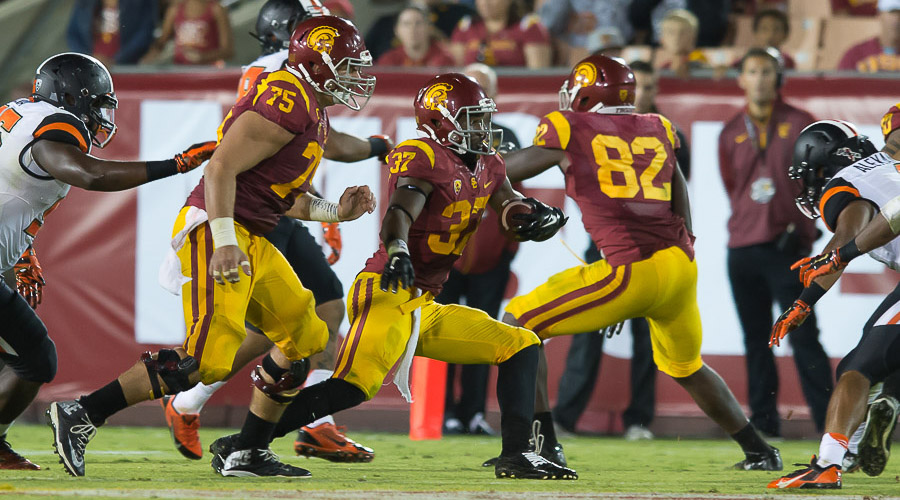 Good luck, Buck: As expected, Trojans junior All-Pac-12 running back Javorius “Buck” Allen is forgoing his senior season for the 2015 NFL draft. Make no mistake about it and given his rags to riches story, Buck’s name belongs right up there with some of the great running backs in Trojans history. Had he played his senior season, the title “All-American” was certainly within his reach. No. 37 will be missed in 2015.

Revealing comments: After thanking the likes of President Max Nikias, Pat Haden, and J.K. McKay, Buck Allen said, “I want to thank Coach O (Ed Orgeron) for trusting in me when he took over last year and Coach Tommie Robinson for putting his job on the line last year by giving me the chance to play.  And now Coach Sark and his staff for molding me as a man and as a complete person on and off the field.  I had a great year with Coach Sark and his staff.”

Revealing comments – Part 2: In Buck Allen’s appreciation and recognition of former Trojans coaches Ed Orgeron and Tommie Robinson, it just goes to show you what a difference a coaching change can make in a young man’s career.

Revealing comments – Part 3: The Buck Allen story is truly an inspirational tale of a fourth string tailback rising to an All-Pac-12 selection. While the coaching changes certainly made a huge difference in Allen’s career, it was certainly understandable that Allen didn’t mention one name in particular, but you can’t ignore the fact that Buck was still recruited by former Trojans head coach Lane Kiffin.

IMHO: After watching him play in the U.S. Army Game, the feeling here is that prep All-offensive tackle Chuma Edoga may be more suited as a guard in the future for the Trojans because of his size (6-4, 283).

Rejected: If you thought that new Michigan coach Jim Harbaugh and his new offensive line coach Tim Drevno, formerly of the Trojans, weren’t going to get into a Trojans/Wolverine recruiting battle right off the bat, think again. Harbaugh contacted the Trojans Chuma Edoga recently, and Chuma instantly rejected the overture. Edoga starts class at Troy on Monday. The score: USC 1, Michigan 0.

Rejected – Part 2: You’ve probably already heard that Jim Harbaugh has also hired former Trojans special teams coach John Baxter to go along with Tim Drevno. If you want to break it down to recruiting California, native Southern Californian Drevno will recruit SoCal, native Central Californian John Baxter can handle his hometown region, and naturally Harbaugh’s own Northern California roots give him that territory as a closer.

The rankings: For all the warranted praise thus far for the Trojans recruiting class of 2015, there isn’t one 5-star commit from the ESPN Top 100, but that, my friends, may only be a matter of time.

Three and done: Found it amusing when all the pundits jumped on Trojans verbal Ykili Ross (Riverside, Ca./Poly) for saying in his nationally televised U.S. Army All-America Game announcement that he was committing to Trojans for the “next three years.” Three years and not four? Hey, in today’s recruiting landscape, you don’t find many incoming freshmen that don’t have their dreaming eyes set on jumping to the NFL after three seasons; Ykili was simply telling it like it is.

Offensive line candidates – Part 3: Yet another name being mentioned is Mississippi State offensive line coach John Hevesy, who just completed his sixth season at MSU and is a former offensive line coach at Utah and Florida. Hevesy, 33 and a graduate of Maine, and was part of Urban Meyer’s staff in national championship runs at Florida.

Wishful thinking: For his own health and for the good of his family, I hope that former Trojans All-American and future College and Pro Hall of Fame lock, strong safety Troy Polamalu, will retire. He has nothing to prove except his love for the game, but those nasty concussions have a way of getting in the last hit.

The bad news: The Trojans will host the University of Washington for yet another Thursday night game in the Coliseum on Oct. 8, and you can expect the endless Chris Petersen/Steve Sarkisian comparisons to commence any day now.

The good news: Doing what good players do in this day and age, University of Washington’s all-world junior linebacker/safety/running back talent, Shaq Thompson – once the apple of the Trojans recruiting eye – has announced he will enter the 2015 NFL draft.

Comparisons: When comparing the current 2015 recruiting classes of the Trojans, Ohio State and Oregon in the updated ESPN national recruiting rankings, the Trojans class is ranked No. 7 behind Ohio State (No. 5) but ahead of Oregon (No. 19). Okay, I hear ya, Notre Dame is No. 11 and UCLA is No. 15.

The prediction: It says here that Oregon will win the national title on Monday night, but it won’t be a shock if Ohio State clips the Ducks. What Buckeyes head coach Urban Meyer has done using his third string quarterback is nothing short of astounding.

IMHO: With all due respect to Alabama’s Nick Saban, Urban Meyer is the currently the best proven college football coach in the country. To turn about the Buckeyes program in two seasons and now playing for the national championship is remarkable.

The national championship: As if you didn’t know but a gentle reminder, Ohio State and Oregon will meet in the inaugural College Football Playoff National Championship on Monday night at AT&T Stadium in Arlington, Texas. The game is set for 5:30 p.m. PST on ESPN, and aren’t you glad you’re not watching on the East Coast because of the time zone differences?

On the radio: If you can’t watch on TV, then try the ESPN radio with Mike Tirico (play by play), Todd Blackledge (analyst), and Holly Rowe and Joe Schad (sideline reports).

How much: StubHub tickets on sale for Monday night’s CFP National Championship Game are being listed as low as $309.45 for standing-room-only in the east end of AT&T Stadium.

Record setter: Expect Monday night’s College Football Playoff National Championship Game to top cable television records that were established during the semi-final CFP round games on New Year’s Day. How much more of the Los Angeles cable television market might be watching ESPN if the Trojans were in the final round?

Confession: Admitting to being a traditionalist in sports, it seems like a game of the magnitude of the CFP National Championship should be televised on ABC and not on its sister cable station ESPN. What next, the Super Bowl exclusively on cable?

Prediction: Well, Arkansas State, the Trojans home opener for 2015, lost to Toledo, 63-44, in the GoDaddy Bowl. So, I think it’s safe to say that Steve Sarkisian’s offense will look to pretty good against the Red Wolves defense. Of course, the Trojans defense won’t be looking to give up 44 points against Arkansas State, or Trojans defensive coordinator Justin Wilcox will have some explaining to do.

Air raid: In case you were wondering, in a losing effort, Arkansas State junior quarterback Fredi Knighten threw for 403 yards and five touchdowns against Toledo. It’s expected that Knighten, a former Parade Prep All-American out of Pulaski Academy (Little Rock, Ark.) will return for his senior season.

CFP expansion – Part 2: Remember, Bill Hancock used to run the old BCS system and sang the praises of that design until it ended. Now, Hancock continues the party line for the current CFP four-team playoff model. However, a few more TCU misjudgments and a snub or two in the future to the likes of a powerbroker like Notre Dame, who athletic director is part of the selection committee, and we’ll see how long the four-team playoff lasts. Hopefully, not for long. Bring on an 8-team model.

Season tickets: Obviously, the Trojans are going to have a whale of a recruiting class come signing day Feb. 4, so it was just good business for the second year in a row for the Trojans Ticket Department to announce an early season ticket renewal deadline (Feb.28) for the 2015 season tickets.

Season tickets – Part 2: As part of the incentive to get season ticket holders enthused regarding the early renewal date, fans will be entered into a “30 days of winning” contest.

Daydreaming: Wouldn’t it be wonderful just for one game to have Keith Jackson call Monday night’s CFP championship?

The final word: Would you rather have ESPN’s Chris Fowler calling the action on Monday night’s CFP title game or ESPN’s former No. 1 college football voice Brent Musburger? I like Fowler, but I’ll take Musburger.