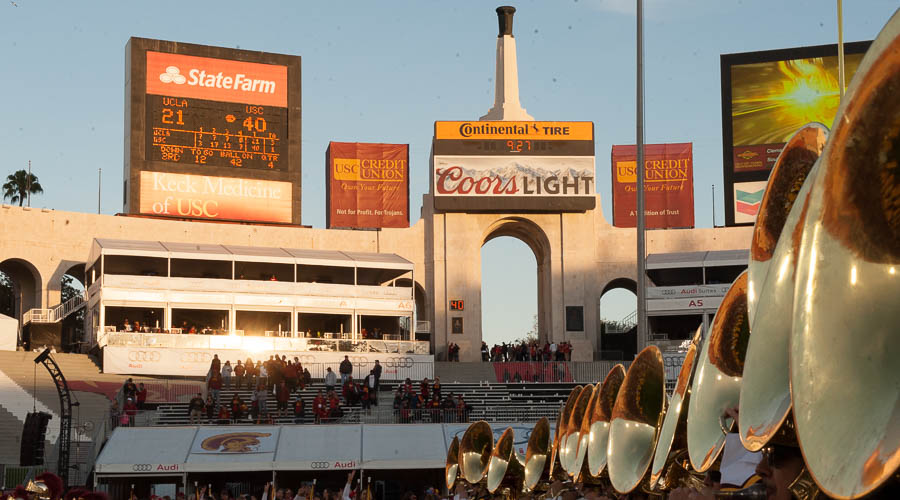 Never a dull moment: Upon receipt of the Trojans’ new colorful Coliseum renovations brochure – as it pertains to new seating location blueprints, restoration gifts, and additional Trojan Club donations for priority placement – either steam came out of your ears like the Chattanooga Choo Choo or you interpreted the new information as just the price of sports business in today’s marketplace. Either way, you have to admit, the current “off-season” of USC football has become anything but dull.

The renovation: Like Michael Corleone said in Godfather lll, “Just when I thought I was out, they pull me back in!” And that line could apply to Trojans season ticket holders who would probably like to take a timeout from the future season ticket re-seating hubris and concentrate on all the excitement of the upcoming 2017 season and even the restoration of the storied peristyle end of the Grand Old Lady from her recently cluttered present (photo above) back to her beautiful 1923 days of uncluttered youth. However, so much attention has been paid to the Coliseum’s future and the 2019 season, and we haven’t even played the much anticipated 2017 season.

The reality: In all fairness, the Trojans Athletic Department doesn’t have a lot of choices in moving the Coliseum renovation along and sticking to its timeline. It is a treacherous public relations nightmare. However, the relocation of seating, new donations, and public relations is all part of the process – as painful and uncomfortable as it may be. Although I am not a lover at all of the new Coliseum renovation design, I do think that Trojans Athletic Director Lynn Swann has been upfront with ticket holders regarding seat placement and understanding that this project has torched a lot of cardinal and gold nerves. What we don’t know is how much a season ticket will be for the 2019 season along with the new tariffs such as restoration gifts and Trojan Fund donations.

The reality – Part 2: It’s not like the Trojans’ athletic department isn’t aware of the incoming tsunami of season ticket angst, as fans are systematically given their options, which could include being re-seated away from their longtime friends. USC AD Lynn Swann said previously he knows re-seating is not going to endure fans to the cardinal and gold cause, but says bluntly it is a necessary evil. Steve Lopes, the chief operating officer for USC’s athletic department, recently commented, “We understand there’s going to be tension.” As late legendary Trojans radio voice Tom Kelly might say under the current circumstances, “Tension is ten cents a ton.”

The 2018 surprise: In Bleacher Reports 2018 draft predictions by writer Matt Miller, the scribe writes that the top quarterback in next season’s NFL draft will be…Wyoming’s Josh Allen. Miller has Allen picked No. 2 overall by the San Francisco 49’ers. Sam Darnold? Miller predicts that Sam will the No. 8 selection by the Los Angeles Chargers.

The 2018 surprise – Part 2:  Miller writes that drafted ahead of Sam Darnold is UCLA QB Josh Rosen, who the writer says will go No. 6 to Jacksonville.

The 2018 surprise – Part 3: So why does Sam Darnold drop down to No. 8? Miller writes, “Sam Darnold may end up QB1 when it’s all said and done. He’s a tough kid in the pocket with a good arm and impressive placement. The biggest question coming from the nine-game starter is a throwing motion that is unorthodox. But the Chargers have the most unorthodox passer in the NFL, and he’s been great since his first snap.”

On the Mark: In his third edition of the 2017 Way-Too-Early Top 25, ESPN college football columnist Mark Schlabach has the Trojans now ranked No. 4 in the country behind new No. 1 Ohio State followed by No. 2 Florida State and No. 3 Alabama.

What’s your deal: More than a few Trojan loyalists were caught off guard when it was learned that Michigan head coach Jim Harbaugh would be one of the guest coaches during one of the Trojans Rising Stars Camps in June that brings together many of the elite Trojans recruits for the next season and beyond.

What’s your deal – Part 2: There’s unanimous agreement that Jim Harbaugh is near the top of the top recruiters chain, and isn’t that like inviting a wolf to visit a lambs’ convention in the farm house? There will also be other college coaches in attendance, and I guess you have to admire Clay Helton’s the confidence that he has nothing to worry about Harbaugh and other in camp attendance.

The guru: According to WeAreSC recruiting expert Johnny Curren, Jim Harbaugh will not be the only Big Ten head coaching representative at the Rising Stars Camps. Others from the Midwest expected to attend will be Michigan State, Northwestern, and Wisconsin. In some cases, the host coach (Clay Helton) will be invited to camps of the other invitee coaches. So, is Clay Helton going to go to the Big House in Ann Arbor this summer and coach some of Harbaugh’s prize recruits?

From famine to feast: Remember when Trojan fans were bemoaning the fact that the Trojans had a lack of numbers at the defensive line position. One would have to say that this is no longer the case, thanks to this past recruiting class with the likes of Marlon Tuipulotu, Jay Tefele, Brandon Pili, Jacob Lichtenstein, and the future addition of Dillon Faamatau. If anything, Clay Helton, Johnny Nansen, and Kenechi Udeze have stocked the shelf and should be applauded.

No worries: I am not all that concerned about next season’s offensive line despite the lack of spring practice bodies. Twenty-nine practice days in August will give the Trojans offensive line enough time to be a unit at least for the first game against Western Michigan, and besides, all of the anticipated fall starters (Chuma Edoga, Toa Lobendahn, Nico Falah, Viane Talamaivao, and Chris Brown) have some sort of starting and/or game experience.

No worries –Part 2: And let’s face it, as long as Sam Darnold can stay vertical in the pocket and continue to be Harry Houdini in face of a rush, he is his own best pass protector.

The destination: With the transfer of Trojan quarterback verbal Matt Corral (Westlake Village, Calif./Oaks Christian), wide receiver Jalen Hall and safety Aashari Crosswell (Los Angeles Hawkins) to traditional national powerhouse Long Beach Poly – and let’s not forget Poly returning tight end Camren McDonald, it will be a recruiters’ paradise, a paradise that could be colored cardinal and gold if you get my drift.

Old McDonald: During the Los Angeles Nike Opening, I asked current Long Beach Poly senior tight end Camren McDonald if he was related to the famous McDonald family of athletes that have attended Long Beach Poly. Camren politely said he was not and was also not aware of the McDonald legacy, but he was impressed that his last name was well known by the historians of the Jackrabbits.

Perspective: I don’t what others may say how bad UCLA or Notre Dame was last season, I’ll take a sweep of the Trojans bitter rivals anyway I can get it.

Still hoping: It’s still the dream here that one of the additions to the Coliseum renovations would be life-like statues of legendary football players around the perimeter of the famous sports venue. I’d even settle for the statues to be inside the gates or even in the outside peristyle end as part of the Trojan Walk before games.