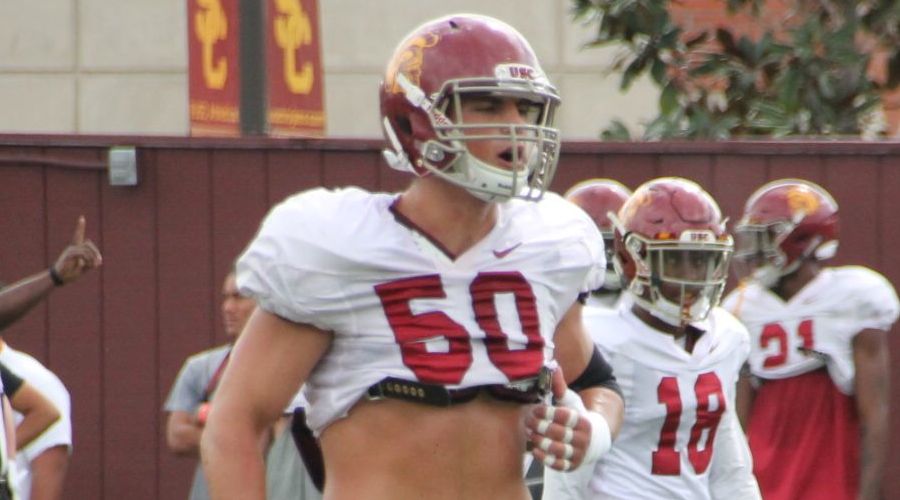 Overview: On a cool and cloudy Saturday morning that started off more like South Bend  in October but quickly turned into a near picture-perfect Southern California day by noon, Clay Helton’s USC Trojans held their second of three “live” scrimmages. The result was a limited scrimmage in terms of time and plays, but there were some individual and team accomplishments that pleased Clay Helton, but probably left those in attendance wanting more. The “more” should become satisfactory when the Men of Troy hold their annual spring game, a live tackling competition, next Saturday (noon) in their storied home, the Los Angeles Memorial Coliseum.

The offense: While young receivers like redshirt freshman Tyler Vaughns and sophomore Michael Pittman Jr., continued to impress and the running of redshirt freshman Vavae Malepeai keeps turning heads, the real story here on Saturday was the Trojans offensive line, which has become more of a “who’s available” rather than finished product. Not that the “who’s available” isn’t fascinating to watch from a technical standpoint. With starter Viane Talamaivao (bicep) and true freshman prodigy Andrew Vorhees (back) out to go along with already sidelined  linemen like Toa Lobendahn (knee) and Nathan Smith (knee), it did give the “next man up” mantra proper scrutiny. It helped on Saturday that returning starting senior center Nico Falah (back) competed on Saturday and the O-line production increased, and now down to three healthy offensive tackles, sophomore tackle Clayton Johnston, who offensive line coach Neil Callaway said earlier has to get better, got his big opportunity and received an extended look with the starting unit and caught the eye of Clay Helton and Callaway. Junior tackle Chuma Edoga, playing both tackle spots with a cast on his right hand while recovering from wrist and finger issues, looks revitalized and appears to be a no-brainer starter in fall, but the real wild card appears to be junior Chris Brown who can play both tackle and guard and started at right tackle on Saturday. As for quarterback Sam Darnold, Sam was Sam, but it appears his backup will be redshirt freshman Matt Fink, who looks so much more confident than last season. Give Fink credit for improving his craft.

The defense: Clay Helton called his defense “violent” after Saturday’s scrimmage. It was the appropriate review, as this unit – while still having some starting and depth questions – looks above the norm at this point. As a group, they fly to ball and they have the physical ability to snap heads backwards. An interesting D-line combination was when senior defensive linemen Josh Fatu and true freshman Marlon Tuipolotu were in the scrimmage together at defensive tackle and nose tackle, respectively. It is entirely possible we’ll see some of that in the fall. The most intriguing defensive story for us on Saturday was the battle for the inside linebacker spots, namely who will line up next to starter Cameron Smith. Both inside candidates, sophomores John Houston Jr. and Jordan Iosefa, had their moments. In the secondary, junior Isaiah Langley continues to catch the attention of head coach Clay Helton.

The special teams – good news, bad news: Redshirt freshman kicker Michael Brown, who seems to have come on of late and gain confidence in trying to fill the extremely large, departed shoes of senior Matt Boermeester (student conduct issue), was 6-of-7 attempts (long of 46 yards) during Saturday’s field goal period. That was the good news. However, the bad news was that Brown missed a 34-yard FG attempt during the scrimmage when it really counted.

Fala la-la-la: As mentioned, because of an unpredictable back issue, returning starting senior center Nico Falah has been brought back slowly but saw extended action at Saturday’s scrimmage. What was revealed after the scrimmage by Clay Helton was that this back issue was with Nico all last season and especially during the Rose Bowl. The senior-to-be, however, played the season and post-season with a warrior’s attitude.

A concern: There is little argument that among the depth issues on defense, the insider linebacker depth could be problematic. The Trojans can rely on junior all-star candidate Cameron Smith to lead the way inside, but from there it’s a mixed bag of contributors. Next to Smith will either be sophomore John Houston Jr. or sophomore Jordan Iosefa. The bigger question: Who backs up Cameron Smith? Right now, it’s walk-on junior Grant Moore (photo above).

A concern – Part 2: To listen to an 11-minute dissection of the Trojans inside linebacker situation, WeAreSC publisher Garry Paskwietz, staffer Johnny Curren, and your humble scribe, discuss it all on the latest WeAreSC podcast produced right after Saturday’s scrimmage: http://www.wearesc.com/forums/forum/main-category/main-forum/1017937-wearesc-podcast-talking-inside-linebacker-spot

Moore is more: Again, Clay Helton praised the work of backup walk-on insider linebacker Grant Moore  who could push for scholarship consideration down the road. Although somewhat light at a listed 210 pounds on a 6-foot frame, Grant, who had a sack on Saturday, really competes, and No. 50 lives up to the old adage that “it’s not the size of the dog but the bite.”

Moore is more – Part 2: After Saturday’s scrimmage, a discussion with Grant Moore’s father, former Trojans standout linebacker Rex Moore, eventually got around to winning the Rose Bowl. Grant quickly made it known emphatically that USC is about winning the national championship. Rex added, “That’s the bar that has been set here.” And there was no family disagreement on that topic.

The swing man: Clay Helton calls senior inside-outside linebacker Olajuwon “Budda” Tucker his linebacker corps’ valuable “swingman.” Tucker, who was ineligible for the Rose Bowl due to academics, certainly has enough incentive to finish his Trojans career on a positive note. Not being able to play in the Rose Bowl is about a big a punishment there is outside of being removed from the team.

The music man: Trojans legendary band director Dr. Arthur C. Bartner was on hand Saturday morning with a smaller version of his magnificent band. Along with The Song Girls and other members of the spirit squad, they were all in attendance not only to entertain for the scrimmage but for the 37th annual “Swim with Mike” fundraiser for the physically challenged and Athletic Scholarship Fund at the nearby Uytengsu Aquatics Center.

Elbow room: Trojans starting offensive right guard Viane Talamaivao had surgery on Tuesday for a bicep tear above the right elbow and is done with spring. He is expected to return for training camp sometime in August.

Renovations begin: For those that were able to attend Thursday’s afternoon Coliseum practice, they saw the beginnings of change as the scoreboard under the torch has been removed and the “small” video board on the press box side has also begun its departure, as well.

Coming home: There will be another former Trojans returning to Los Angeles, as cornerback Nickell Robey-Coleman, who played for Buffalo for four seasons, signed with the Rams on Friday. Small but playing with a big heart, Nickell, now 25, was a mighty mite for the Trojans during his career and now he has a chance to play before the masses that supported him during his collegiate career.

Start your engines: Shortly this afternoon (Sunday), Clay Helton will give the command, “Drivers, start your engines!” as Grand Marshal for the 43rd Toyota Grand Prix of Long Beach. Might this honored moment find itself on video sometime during this week’s team meetings?

Say what: In his post-practice comments on Thursday regarding the history of the Coliseum, Trojans head coach Clay Helton mentioned that the Grand Old Lady has even hosted presidential inaugurations. It has? Hey, we’ve all had a faux pas from time to time, but Helton was really trying to convey is that the historical facility is really a special place and it is.

Main attraction: The 2017 Texas A&M-UCLA season opener in the Rose Bowl has been moved from Saturday, Sept. 2, to Sunday, Sept. 3, which means the Trojans will have the local Saturday college football spotlight when they host Western Michigan on Saturday, Sept. 2.

Know yourself: Former Trojans starting senior linebacker Michael Hutchings has elected not to pursue the NFL but commence his career goals both in USC athletics and in the business of real estate.

Know yourself – Part 2: Hutchings said, “I want to stay around USC and stay involved still with the athletic program, with football. I really used the game as a platform. I want to relay that message to everyone that goes through here. There’s 85-90% of us that don’t go to the NFL. Let’s use it as a platform to still be successful even if you don’t fulfill your ultimate dream of playing professionally. Let’s still be successful in the business world.”

Heading home: Former USC All-American linebacker and Butkus Award winner Chris Claiborne has been named to the coaching staff at Long Beach Poly. Chris, arguably USC’s greatest inside linebacker, had previously coached at Diamond Ranch and Calabasas. Having grown up in Riverside and having attended Riverside (Calif.) North High, Chris appears to be inching closer to his home roots in the Inland Empire.

Camping plans: Clay Helton and staff have announced the dates for their annual summer camps. In case you missed it, Rising Stars Camp will be held on two separate Sundays in June (the 11th and 25th), the 7-on-7 tournament will be held on June 17th, and the specialists camp will commence on June 24th.

The last word: During a recent visit to a popular Walt Disney World Magic Kingdom restaurant, we were eating and a couple of Alabama fans sat next to us. The man was wearing the familiar script “A” on his left breast. Obviously too good of a conversation to pass up, we asked the Bama fan if he and his wife had attended the Trojans game against The Tide last September in Dallas? The friendly “Bama” fan said in that familiar Southern drawl, “I am sure glad we didn’t play y’all at the end of the season with that new quarterback of yours. You weren’t the same team we played in Dallas.” And the Crimson Tide fan wasn’t just being polite but honest.