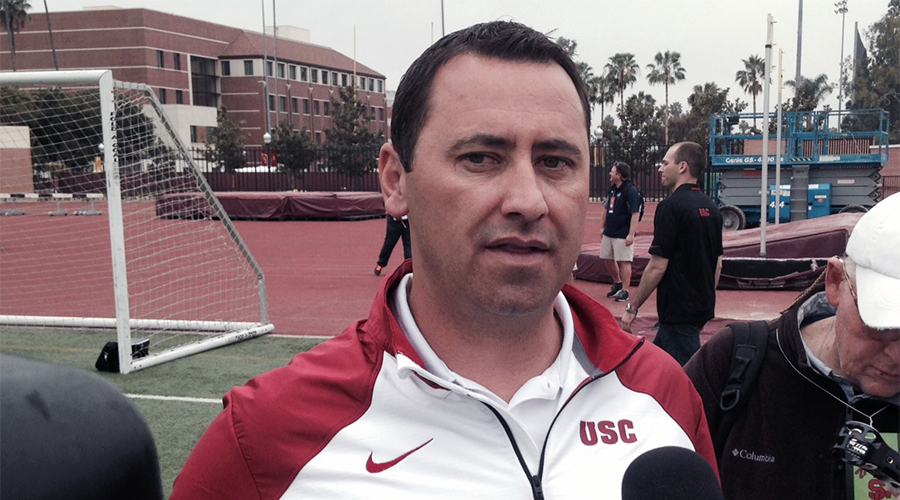 The apology: It was confirmed Sunday morning through an apology statement by Trojans head coach Steve Sarkisian and follow-up response by USC Athletic Director Pat Haden that there was inappropriate behavior by Sark in full public display at Saturday night’s Salute to Troy. The question now becomes will the responses by both men be enough to satisfy the Trojans football community? Whatever the answer, the whole episode was unfortunate and put the Trojans football program in an unenviable national spotlight.

Scrimmage evaluation: Prior to the Salute to Troy incident, Trojans head coach Steve Sarkisian wasn’t happy in pregame scrimmage warm-ups earlier in the day, strongly challenging his players to be more physical than their rivals in Westwood, and the USC defense seemed to get the message with how they performed. Unfortunately for the offensive-minded Sarkisian, his side of the ball apparently didn’t get the message to be more physical, productive, and consistent. The scrimmage was not a day for the offense.

Scrimmage evaluation – Part 2: The defense during Saturday’s scrimmage was not spectacular but was efficient while Sark’s offense was spotty and didn’t apparently feel the same sense of urgency with the season opener against Arkansas State just two weeks away. The Trojans future at linebacker with Osa Masina and Porter Gustin continues to be neon lights bright.

Scrimmage evaluation – Part 3: Even with the spectacular Adoree’ Jackson playing on offense only, quarterbacks Cody Kessler or Max Browne couldn’t seem to get the offense into a consistent mechanism and justified Sark’s unhappiness after practice. Browne, however, did make a couple of pass completions down field that did provide some positive moments.

Scrimmage evaluation –Part 4: The offensive line’s performance was not at the championship level. Of course, projected offensive starters Chad Wheeler and Damien Mama didn’t play and returning starting junior right tackle Zack Banner was in and out of the lineup in favor of true freshman right tackle Chuma Edoga.

Salute to Troy’s Garrett: Around three months ago, a member of the 1965 USC football team, which was honored at Salute to Troy on Saturday night, told me that Mike Garrett would not attend last night’s Salute to Troy because of what had happened at the end of Iron Mike’s tenure as Trojans athletic director. However, there was USC’s first Heisman Trophy winner, No. 20, getting a standing ovation last night in appearing with his 1965 team in recognition of their 50th anniversary.

Salute to Troy’s Garrett – Part 2: Mike Garrett absolutely did the right thing in attending Salute to Troy by showing class, love for his alma mater, and by taking the high road in attending the celebration. Garrett avoided a deepening rift between himself and the university. Welcome back, Michael Lockett Garrett.

What transition: Well, it certainly didn’t take sophomore Adoree’ Jackson long this week to move from shutdown corner to electrifying superstar on offense. I am not saying Adoree’ will win the Heisman Trophy in 2015, but if he continues his offensive production into the season, he’ll certainly get national recognition and enter into the Heisman conversation.

Plattenburg believer: Regarding freshman quarterback Sam Darnold, sophomore safety John Plattenburg says, “That kid can go. He has the arm and he’s athletic. I think he’s the real deal.”

Chip off the old block: While sophomore sensation JuJu Smith-Schuster is know for his athletic catches and physical play, don’t understate his blocking as a solid part of his game. His crunching block in Monday’s scrimmage helped spring sophomore lightening bolt Steven Mitchell for a long touchdown catch and run.

Comfort zone: The play of sophomore corner Jonathan Lockett has improved to the point that he is in the conversation for increased playing time. As to why he is playing better compared to his freshman season, Lockett says, “It’s knowing the defense. Last year I was thinking too much.”

McNamara’s band: If there was one Trojan nearly invisible at the beginning of training camp it was Oklahoma junior transfer Taylor McNamara. However, invisible no more as the San Diego native from Westview High this past week has started to show what he’s all about not only in recent practices but in the Trojans scrimmages.

Dynamite duo: If both Taylor McNamara and freshman Tyler Petite, who had a touchdown reception in Saturday’s scrimmage, become dynamite tight ends, would they be known as TNT?

The transfer game: I see it as a good choice by former Trojans quarterback Ricky Town to enroll at Arkansas and the Razorbacks vaunted running game of head coach Bret Bielema. In Bielima’s run-first offense, Town will play second fiddle to the tailbacks and thus not have the pressure of the entire offense on his shoulders.

You can Tell: Regarding the play of Marvell Tell, All-Pac-12 linebacker Su’a Cravens says, “Marvell’s a beast out there. He reminds me of a young T.J. McDonald.”

Redshirt ready: Although he must redshirt this coming season, Florida freshman tight end transfer Daniel Imatorbhebhe hauled in a 49-yard TD catch and run on Monday night, so more tight end help is on the way in the future.

I didn’t know that: Junior tailback Justin Davis says that his favorite spirit animal is the Poison Dart Frog and his best L.A. restaurant is “Pinks Hot Dogs.”

The All-Time team: The Football Writers Association of America (FWAA) announced its 75th Anniversary FWAA All-America Team. On the first team were Trojans offensive tackle Ron Yary and defensive back Ronnie Lott. On the third team was defensive back Troy Polamalu.

The All-Time team – Part 3: Let me tell you a little something. I saw Archie Griffin run in person and he was a good back. The fact he won two Heisman Trophies doesn’t mean, however, he’s one of the top two running backs in the past 75 seasons. Any of the Trojans Heisman Trophy winning tailbacks was better than Griffin, and Trojans Heisman runner-up Anthony Davis was at the least as good. I belong to the FWAA, voted on the anniversary team, and it’s embarrassing.

The All-Time team – Part 4: Other than Doak Walker, I saw all the FWAA 75th Anniversary All-Americas and Trojans tailback O.J. Simpson was better than all them. I get why Simpson was completely left off by other voters but not by me. I voted for Simpson and the reality is that you can’t have a discussion regarding the top six collegiate running backs of all-time without Simpson being part of the conversation.

Trojans for life: Pete Carroll has signed former Trojans free agent wide receiver George Farmer to a contract, but will convert him to a defensive back. I could easily see George as a strong safety. Sounds like Carroll is willing to give George time to make the transition.

The Gipper – Part 2: The Heisman Trophy won by Marcus is part of an extensive salute to Ronald Reagan’s love of football. Among the displays are rare artifacts related to Reagan’s football playing days in high school and college football as well as his actor career and role portraying College Football Hall of Famer George Gipp (Notre Dame) in “Knute Rockne: All American.”

Dumbing down: The Trojans have got a lot of flack for opening the 2015 season with home games against Arkansas State and Idaho. Thought you’d be interested to know that archrival Notre Dame has added mighty New Mexico to its 2019 schedule.

SC/ND: Showtime will chronicle the Notre Dame football team’s 2015 season in a show called “A Season With Notre Dame,” which will premiere Sept. 8. Can’t wait to see USC/ND game week, which should be especially interesting depending on the final score of the Oct. 17th clash in South Bend.

The talking heads: The Trojans are currently scheduled to appear on ESPN just once this season (Nov. 8 – Washington), but that could change since there are still seven televised games to be determined. FYI, ESPN has released its college football booth teams for the 2015 season, which includes Chris Fowler and Kirk Herbstreit on ABC’s Saturday Night Football while Brent “You are looking live” Musburger continues as the lead play-by-play announcer for the SEC Network.

Reminiscing: There was a time that it just seemed like former USC players and coaches dominated college football telecasts.