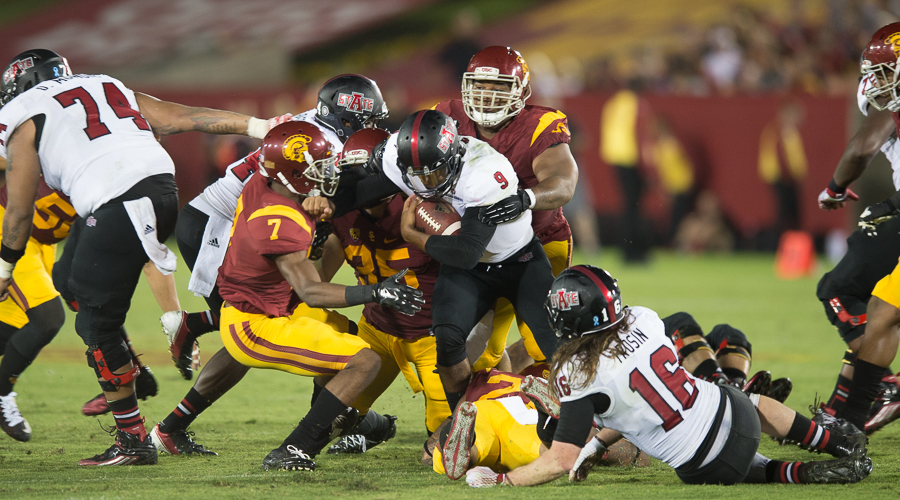 All hands on deck: The long off-season is almost over, and isn’t it exciting to find the season opener meaningful. Yep, there is high excitement in the air over opening with (gulp) Alabama instead of a meaningless, unattractive game with Arkansas State.

Remembering ASU: And we’re not talking about the Sun Devils but Arkansas State. In case you’ve forgotten or would just as soon forget, the Trojans mopped up the Red Wolves, 55-6, in the 2015 opener played in the Coli. Obviously, don’t expect the same Trojans margin of victory over the mighty Alabama Crimson Tide. USC fans are just hoping that their beloved Trojans aren’t the Arkansas State Red Wolves for the defending national champs. No question, however, the Trojans have been gearing up in the off-season for the defending national champs and will have gloves off come Sept. 3 in Arlington.

Politicking: With both the Republican and Democratic Conventions now history, it should be noted that USC is 206-66-14 during presidential elections years. The Trojans are 117-26-5 (.807) in years when Republicans have won the White House and 89-40-9 (.678) when the Democrats were the victors.

Helmet separation: In case you haven’t noticed, the Trojans wear a helmet with a Trojan warrior decal on each side while Alabama uses a red helmet with a white number(s) on each side of the helmet, which corresponds to the player’s uniform number.

What happened?: It’s still hard to believe that other than a few documentaries, a movie has never made regarding the historic Trojans venture into racially charged Alabama in 1970. There’s no question that the 1970 Trojans smashing 42-21 victory over Bear Bryant’s club in Legion Field in Birmingham dramatically changed the course of athletic racial integration in the South. In fact, if it wasn’t for the Trojans waxing of the Crimson Tide on that hot and humid September evening, the SEC might have taken longer to eventually develop into the super conference that it is today.

Sam Bam: In a 2009 Wall Street Journal story regarding the historic 1970 Trojans victory at Alabama, legendary Trojans fullback Sam “Bam” Cunningham said, “I’m just amazed how much the landscape has changed since the late ’60s and early ’70s. At the time, I didn’t dwell upon how big a deal it was. If I’d thought any further out, I might not have played as well as I did. But seeing the results over the past 40 years, we left an impression on college football and Alabama.”

Déjà vu: I fully expect to eventually see incoming freshman running back Vavae Malepeai used in the same manner of Trojans fullbacks during the Pete Carroll era – a combination of running and pass catching.

The surprise: Sometimes really good high school players become great high school players after they become collegiate performers. A player that I think could be one of those types is former Bishop Amat two-way star Trevon Sidney, who seemed to be at times overshadowed by fellow Amat teammate and current Trojans true freshman wide receiver Tyler Vaughns, which is a testament to what is expected of Vaughns.

Shocking – not: The USC Trojans Alumni Association’s travel package for the Alabama game is a sellout. The package included two night’s hotel accommodations at The Hyatt Regency Dallas, round-trip transfers between the hotel and AT&T Stadium, and entrance into the official USC Tailgate (3-hour, pre-game, all-you-can-eat and drink with an appearance by the Trojan Marching Band). Of course, there is no mention of game tickets.

Stockpile: There has been a lot of debate – pro and con – that the Trojans have been recruiting too many wide receivers and not enough defensive linemen. Say what you want, but Trojans head coach Clay Helton says, “This is probably the most explosive group of wide receivers USC has had since I’ve been here. With our depth, we now have the ability to put three or four wideouts on the field at the same time, each of whom causes a mismatch for defenders.”

Concern: With the early availability of inside sophomore linebacker Cameron Smith still in question, there is some concern regarding the inside linebacker position. Clay Helton says, “Inside linebacker is among the deepest and most talented positions on our team. We had some young players gain invaluable playing experience here last year, and that should carry them forward into 2016.”

Ticket time: Single game tickets for Trojans home football games are now available for purchase by using usctrojans.com. And don’t forget that includes that little spat with that little private school from South Bend on Nov. 26.

Remembering Dennis: As you have probably already heard, football lost a friend in outspoken coach Dennis Green. The Trojans know about battling Green when he was the coach at Stanford. At the time, he was considered breaking ground in racial advancement by being the head coach at two reputed academic schools, Stanford and Northwestern.

Remembering Dennis – Part 2: Under Dennis Green, Stanford beat the Trojans for the first time in 16 years.

Wishful thinking: If you’re a Rams fan and hope that Pete Carroll would come back to Los Angeles as the next Rams coach if current USC alum Jeff Fisher doesn’t succeed, you’ll be disappointed to learn, according to ESPN’s Adam Schefter, that Carroll’s contract with the Seattle Seahawks has been extended through 2019. Carroll, now the oldest coach in the NFL, recently said he sees no end in sight to his coaching career.

After further review: Coming to its senses, the College Football Playoff has elected to play semifinal games on Saturdays or holidays after a ratings downfall on New Year’s Eve last season. In other words, games will be played on Saturdays – with the exception of the 2016 season – and will no longer conflict with the world’s biggest countdown celebration. Now, the next wise move by the CFP would be to expand its playoffs from a four-team to an eight-team format.

Carry on: Former Los Angeles Times college football columnist Chris Dufresne retired from the newspaper scene after last season. However, it didn’t take Chris long to transition into a new project that may be of interest to Trojans fans. Dufresne, along with Herb Gould and Mark Blaudschun, have launched TMGcollegesports.com, a new website devoted to college football.

In memory: Life is so short and unpredictable. It was sad news to learn that Nebraska Cornhuskers punter Sam Foltz was killed in an auto accident last week after participating in a kicking camp in Waukesha, Wis. Foltz was the punter for the Cornhuskers when the Trojans won a thrilling Holiday Bowl clash, 45-42, in 2014.

In memory – Part 2: As a sophomore, Foltz averaged 44.7 yards per punt in the Holiday Bowl against the Trojans, including an NU bowl record 64-yard punt.

Huskies helmet: When the Trojans play at Washington on Nov. 12, the Huskies will be wearing a new helmet. UW will be sporting one of the first football teams to wear the new “state of the art” ZERO1 helmet designed by VICIS, whose mission is to reduce the risk of concussions. The University of Washington was also awarded a $2.5 million grant from the NFL last year for concussion research.

It’s all uniform: Trojans uniform change has already been a volatile subject. The Trojans big rival, Notre Dame, however, has changed uniform design for “special occasions.” Well, Under Armour celebrated its 20th anniversary by unveiling new uniforms for the Irish, Wisconsin and Yale in New York City.

It’s all uniform – Part 2: I find the latest “special occasion” Irish uniforms leaving much to be desired and further reinforcing why athletic apparel companies have too much power in today’s college sports. It’s all about the money.

The last word: Like the Republican Convention before it, when the Democratic roll call for president took place last week, Alabama was up first up. Naturally, the first thing out of the Alabama spokesperson’s mouth was a reference to “football champions,” an obvious reference to the Crimson Tide. One thing about Alabama football, it can certainly bring Republicans and Democrats to agree on one thing.