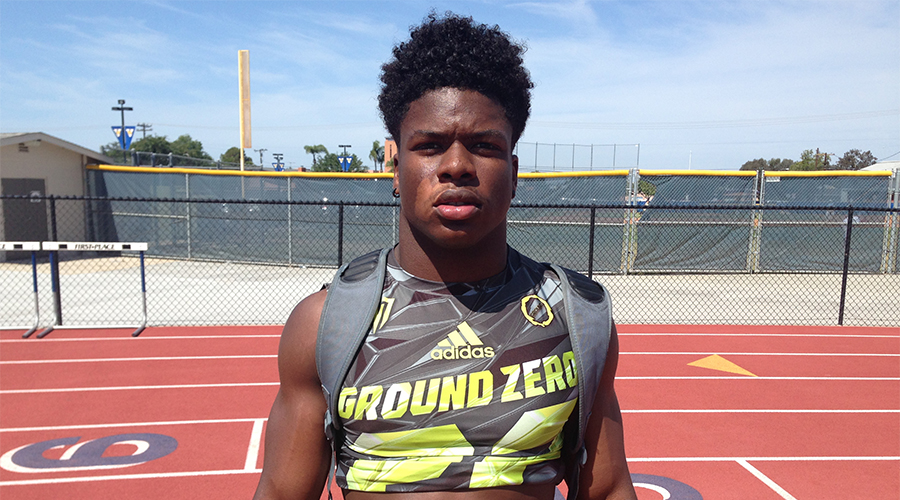 The Grand Opening: Well, for those that worry about such things, last summer at The Opening, Nike’s showcase of America’s greatest returning prep players, there were a significant number Trojans oral commitments. This summer, there are currently just two commits. However, it’s not where you start but how you finish. Those five commits from The Opening a year ago eventually never signed with the Trojans, so right now any current commit is simply a pledge, although super senior running back Stephen Carr (Fontana CA/ Summit – photo above) is said to be near rock solid with the Trojans.

The Grand Opening – Part 2: In case you’ve forgotten, among the five former Trojans commits that attended last summer’s The Opening were linebackers Daelin Hayes (Notre Dame) and Mique Juarez (UCLA), and running back Melquise Stovall (Cal). If you recall, Hayes not only committed to the Trojans, but he moved to California to play prep football, as well, before finishing his senior season back in the Detroit area.

The Grand Opening – Part 3: If current Trojans quarterback recruit Jack Sears (San Clemente, Calif.), who participated in The Opening, eventually selects UCLA rather than the Trojans, it could set up a future crosstown rivalry of former San Clemente quarterbacks – Jacks Sears versus the Trojans Sam Darnold – and wouldn’t that be interesting!

Keep hope alive: WeAreSC’s Johnny Curren, who is in Oregon covering The Opening, has confirmed through 5-star Alabama offensive line commit Alex Leatherwood (Pensacola, Fla./Washington) will make an official to the Trojans in the future. Alex will also trip to Michigan as well as Alabama. Leatherwood’s official to USC could be as big a news as any gleaned from The Opening. Having seen Alex in person at the Rising Stars Camp, this man-child is the real deal.

Keep hope alive – Part 2: There has been confirmation  that Alex Leatherwood (6-6, 320) really liked his Rising Stars Camp trip… but he’s still committed to Alabama. Truth be told, the Trojans are still a long shot, but with the announcement that Leatherwood plans to take an official USC visit in the fall, the “long shot” doesn’t look quite as long. I like USC’s position on this one, and if Alex brings a family member to L.A., things could get really interesting. Clay Helton and Neil Callaway have definitely stepped into the recruiting batter’s box on Leatherwood, and you can’t hit a home run if you don’t go to bat.

Pac-12 Media Day: As if you didn’t need an unofficial announcement that the 2016 season is right around the bend, the Pac-12 will hold its football media day(s) this Thursday and Friday at Hollywood & Highland (adjacent to the Loews Hollywood Hotel).

The reps: A reminder that besides head coach Clay Helton, the Trojans on Thursday will be sending to media day celebrated all-stars Zach Banner and Adoree’ Jackson, All-Pac-12 offensive tackle and corner, respectively. Coach Helton will speak at 11:08 p.m. while the Trojans pair is scheduled to appear at 11:15 p.m. The festivities will be carried on the Pac-12 Networks…if you get the Pac-12 Networks. If not, try the conference website.

The revolving door: By now, you probably know that former Trojans associate athletic director and wide receiving living legend J.K. McKay is no longer a university employee. With lifelong best friend and former athletic director Pat Haden no longer in the USC athletic department and assigned to overseeing the Coliseum renovation, it should be noted that McKay’s departure was not unexpected. When Haden made it official that he was leaving as athletic director, it was only a matter of time before the McKay confirmation was made public.

The revolving door – Part 2: McKay’s departure is sad in a way because J.K. has meant so much to the football memories of so many Trojans fans. Unlike best friend Pat Haden, J.K.’s reputation departs untarnished unlike Haden’s, who suffered through a tumultuous administration that had folks thinking about controversies rather than the heroics of the former Trojans quarterback.

The revolving door – Part 3: According to The Times this week, J.K. McKay said, “I think it was just time. I felt like Lynn (Swann), coming in, he needed to have his own group. I came in with Pat, and I am proud of what we did. It just felt like time.”

The revolving door – Part 4: Most folks that know J.K. McKay, 63, like him and in our small interactions with him he was glib, humorous, and cooperative. He didn’t want the spotlight, but he was thrilled that the McKay Center came to fruition during his time at the university. Although not confirmed, rumors have it that he may be headed to a job in the NFL. McKay’s younger brother, Richie, is currently the president and CEO of the Atlanta Falcons of the NFL.

A perspective: USA Today has come out with its special college football preview. USA Today says it’s Alabama as No. 1 with the Trojans being ranked No. 34 in the country. That seems a little harsh if you know what I mean.

Another perspective: Computer guru Jeff Sagarin has his preseason computer poll. Naturally Alabama is No.1 while the Trojans are No. 14.

You don’t say: Of the Trojans, USA Today writes, “The roster is talented enough to compete for a national title. It’s easy to see USC finishing with 10, or even 12 wins. But it could also end 6-6.”

Remembering Yary: The only Trojan lineman to receive the Outland Award, given to the nation’s premier lineman, is former two-time All-American Ron Yary (1967) The 2016 Outland Watch List is out and Trojans All-Pac-12 offensive tackle Zach Banner, offensive tackle Chad Wheeler, and offensive guard Damien Mama are on the list. Before you get too worked up about any watch list, it should be noted that Mama is locked in legitimate competition with sophomore Chris Brown for a starting guard position heading into August camp.

FYI: There are 80 players on the Outland Trophy Watch List and 10 players are from the Pac-12 Conference.

Defense, defense: The 2016 watch list for the Bronko Nagurski Trophy, awarded to the nation’s outstanding defensive player, is out and the Trojans junior All-Pac-12 corner Adoree’ Jackson and sophomore linebacker Cameron Smith are on the list. No Trojan has ever won this award. There were 88 players named to this season’s watch list.

IMHO: If I haven’t said this enough, I would much prefer to see the famous No. 55 jersey awarded to a defensive player after he proves himself on the field and garners some honors rather than given as a recruiting tool and before the recruit has even taken a snap in college.

The price is right: The latest update on ticket prices for the USC/Alabama game on Sept. 3 gives some options, according to StubHub. The lowest cost is currently $127 for an upper level seat while a low level seat goes for a high of $752. This not counting those ridiculous additional “fees.”

The last word: The Trojans have received back O.J. Simpson’s Heisman Trophy after it had been originally stolen. There is now some clamor to bring back Reggie Bush’s Heisman Trophy. One problem, Simpson’s trophy was stolen and the return has nothing to do with The Juice’s sordid legal history. On the other hand, Bush’s issues, unlike Simpson whose eligibility during his playing days is not in question, have everything to do with Reggie’s eligibility status at USC during his junior season. We’re talking apples and oranges here. And on that note, have a great week.