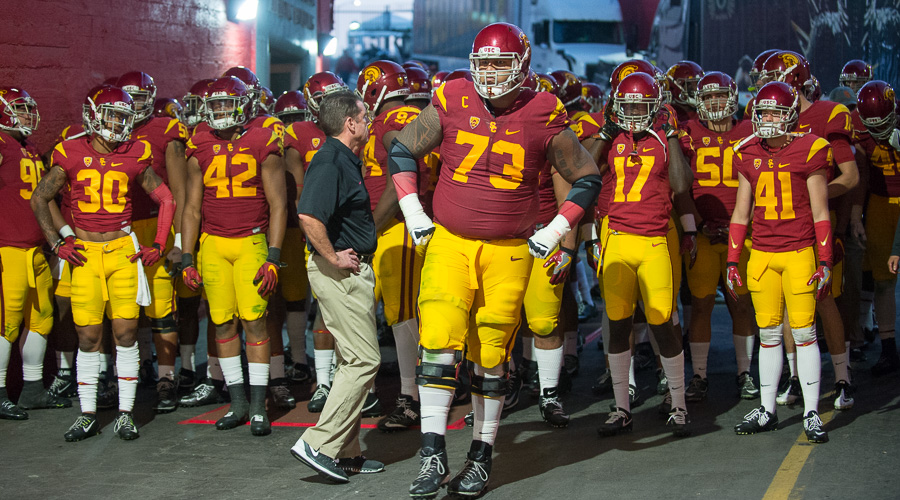 Read all about it: So, Trojans fans, you might want to do a little bragging to your UCLA and Notre Dame buds by reminding them that after this weekend’s NFL draft, USC is the first school in the nation to reach an historical 500 total draft picks total plus one (501) and maintain its national first-round draft selections lead (80), as well.

The rivalry: Just when those UCLA Bruins thought they’d have bragging rights that they would have the only first-round NFL draft pick in town, Trojans corner and special teams standout, Adoree’ Jackson, ruined the Westwood parade by being picked No. 18 in the first round by Tennessee ahead of UCLA defensive end Takkarist McKinley, who was selected No. 26 in the first round by the Atlanta Falcons.

The waiting: Trojans WR JuJu Smith-Schuster was taken as the 18th pick in the second round (No. 62 overall) by the Pittsburgh Steelers. Although there was some conjecture that JuJu might be taken by the hometown Rams, he really is a Steelers type of player – a working man’s athlete. Steelers fans will receive him with open arms knowing that the last great receiver to play professionally in Steeltown was named Lynn Swann.

The waiting – Part 2: Steelers fans also have wonderful memories of the last great USC Trojans player that came east, but he played defense. Yep, it’s only a matter of time until former Trojan and Steelers strong safety Troy Polamalu enters the Pro Football Hall of Fame.

Banner day: Former Trojans All-Pac-12 tackle Zach Banner (photo above – No.73) was taken as the 31st selection in the fifth round (137 overall) by the Indianapolis Colts. One of USC’s all-time “personalities”, when his NFL playing days are over, Big Zach will one day be in front of somebody’s microphone in sports broadcasting.

The surprise: If there was a true surprise of the Trojans drafted, it has to be former safety Leon McQuay, taken in the sixth round by the Kansas City Chiefs. You talk about a Trojan who turned his career around. It looked like a dead end when Leon endured difficult underclass performances, but he got himself off the mat and had a good senior season, capped by his never-to-be forgotten interception late in the final quarter against Penn State in the Rose Bowl to set up the winning field goal.

A Buccaneer: The feel-good story of  last season, defensive tackle Stevie Tu’ikolovatu, was taken in the seventh and final round by Tampa Bay. The Rose Bowl Defensive MVP truly had a dream conclusion to his brief but rewarding Trojans career. You could argue that all the great Polynesian defensive linemen recruits that have been coming Troy’s way recently through recruiting are due in part to the influence and testimony of Stevie.

The example: For those Trojans who did not get drafted, they are reminded there are countless former players that make an NFL roster through free agency. So, to those cardinal and gold free agents signed (Damien Mama/Kansas City, Isaac Whitney/Oakland, Jordan Simmons/Oakland, Darreus Rogers/Seattle, Chad Wheeler/New York Giants, Justin Davis/LA Rams, De’Quan Hampton/Detroit) the dream remains alive, so help me Nickell Robey-Coleman.

IMHO: Perhaps it was family circumstances, but I can’t help but think that former Trojans offensive guard Damien Mama, who signed Saturday as a free-agent with the Kansas City Chiefs, should have returned for his senior season.

The legacy: I hate to bring this up again, but former Trojans standout offensive tackle Pat Harlow’s son, Sean, who played his ball at Oregon State where he became All-Pac-12, was taken one spot ahead of Zach Banner in the fourth round by the Atlanta Falcons. Sean Harlow wanted to desperately follow his father to Troy, but the Trojans head coach at the time went in another direction. The Trojans head coach? Hmmmm.

The legacy – Part 2: There should be a rule that states that any Trojans legacy being recruited gets first call over a non-legacy if all things appear equal, so help me Ronnie Lott and Pat Harlow. And if his last name is Matthews, just sign’em.

The finale: Although it’s scheduled for a year from now, it appears that former Trojans running backs coach Todd McNair will finally have his day in court with the NCAA. No reason to rehash the details if you’re a Trojans fan, but if the trial does commence on April 18 next year, grab your popcorn and favorite libation and don’t be afraid to cheer for the old coach. After six long years, hopefully justice will be served for McNair.

The axe: Like many of you, I was surprised by some of the names that ESPN announced as being cutback casualties. In particular, I was saddened to see Pac-12 Internet columnist Ted Miller was let go and sorry to see old writer friend Mark Saxon also dismissed. Both are standout professionals.

Quarterback U.: According to ESPN, of the last 15 NFL drafts, the top producer of quarterbacks is the University of Southern California. ESPN writes, “Southern Cal is the only school to produce multiple Pro Bowl during this span (Carson Palmer and Matt Cassel).” The Trojans have had seven quarterbacks drafted in the last 15 drafts.

Travel plans: In case you were wondering, the College Football Playoff Championship Game will be played at Mercedes-Benz Stadium in Atlanta on Jan 8, 2018.

Travel plans – Part 2: If the Trojans are fortunate to get into the College Football Playoff semi-finals on New Year’s Day, the Men of Troy could land in the next Rose Bowl, depending on the pairings.

South Bend travel: For your consideration, there are dwindling options for hotels in the general South Bend area for the Trojans visit to Notre Dame Stadium on Oct. 21. A word to the wise, better plop down the dough now or you won’t be near the stadium and don’t forget it’s a 7:30 p.m. kickoff local time (ET).

RIP: To the memory of former Trojans defensive lineman David Webb, Trojans co-defensive player of the year in 1991, who tragically passed away recently from cancer. There have been tributes, but nothing more touching than some of the social media messages from his former Trojans teammates. I remember David when he starred locally at Irvine High School in Orange County as an All-CIF linebacker. No question, No. 44 was a true warrior.

New rule changes: Beginning in 2018, players’ pants must have knee pads such that the pants and the pads cover the knees. Previously, the rules recommended that the knees be covered, but this was not required. The committee is delaying implementation of the mandate until 2018 because a number of schools have already bought equipment for the year.

New rule changes for 2017: No defensive player who runs forward from beyond the neutral zone may leap or hurdle in an obvious attempt to block a field goal or try. Before this change, a player committed a foul only if he landed on another player.

New rule changes for 2017 – Part 2: The nameplate area of the jersey is added to the inside collar of the shoulder pad and jersey as places where it is illegal for a tackler to grab a ball carrier and immediately pull him to the ground. The rules committee recognized that on occasion a tackler grabs the nameplate area and jerks the ball carrier down, with the same effect as if his grip was on the collar.

A Husky voice: Bob Rondeau, the longtime Voice of the Washington Huskies, announced he will retire following the conclusion of the 2017 Husky season, his 37th in Seattle. The Trojans and Huskies do not play each other during the 2017 regular conference season, but they could meet in the Pac-12 Championship Game in December.

The last word: It didn’t take long after the final 2017 NFL draft pick for pundits to start prognosticating the 2018 draft. You wouldn’t have been surprised by the first name mentioned, so help me Sam Darnold.