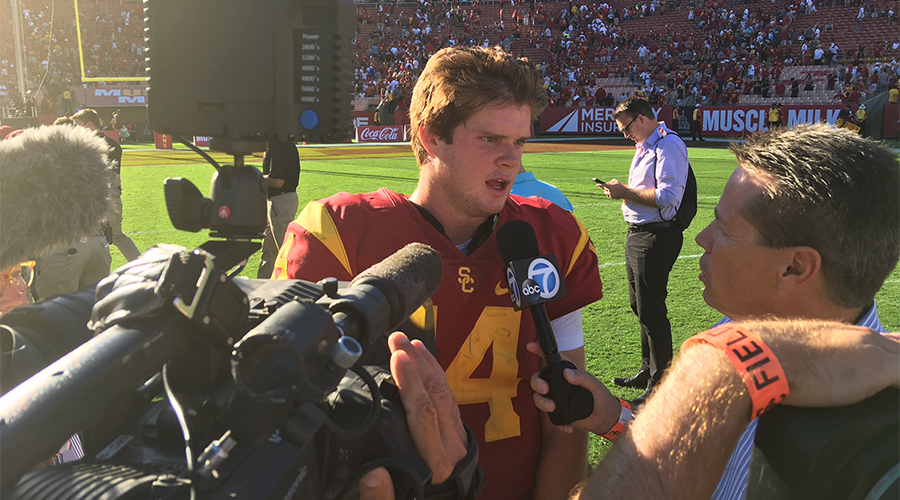 Say what: By the time National Recruiting Signing Day is completed on Wednesday, the USC Trojans are expected to have a top 10 recruiting class, maybe even top 5 if the blue chips fall their way. So, will somebody please explain to me why ESPN is not sending a field reporter to USC on signing day but instead Colorado, which may have the fifth best Pac-12 recruiting haul on Wednesday behind the Trojans, Stanford, Washington and UCLA?

Say what – Part 2: To put things into proper national signing day perspective and the Pac-12 in particular, ESPN is sending half its 16 field reporters to selected SEC schools (Alabama, Arkansas, Auburn, Georgia Kentucky, LSU, South Carolina, and Texas A&M). The Big Ten will receive ESPN coverage with three schools (Ohio State, Michigan, and Penn State), the ACC with two schools (Florida State, Clemson), and the Big 12 with two schools (Oklahoma, Texas). The Pac-12 has just one university being covered by ESPN and that’s Colorado, which was beaten last season by the Trojans, Washington, and humiliated by Oklahoma State, 38-8, in the Alamo Bowl. And per scouting services in the know – which ESPN is one – the Trojans are currently leading the Pac-12 recruiting rankings and have again captured the attention of the nation.

Say what – Part 3:  Hello, Pac-12 commissioner Larry Scott. Any comment on ESPN’s obvious imbalance of national televised recruiting coverage? One thing for sure, the recruiting section of the WeAreSC message boards has come unglued with the apparent ESPN snub of the Trojans for Wednesday’s exercise.

Tick, tick, tick: In the immortal words of that great Kenny Loggins hit, “This is it!”, the moment of recruiting truth for the Trojans comes Wednesday, and the current school of thought is that Clay Helton and staff have taken full advantage of that nine-game winning streak, exhilarating Rose Bowl victory over Penn State, and aggressive but workmanlike recruiting.

Echoes of 2016: In various interviews of Trojan commitments and those still giving heavy consideration to signing with the Cardinal and Gold, the constant theme has been the great winning streak, the Rose Bowl victory, and Clay Helton. However, it could be argued that nobody did more for dotting the “i” on the recruiting season than quarterback Sam Darnold (photo above) and placekicker Matt Boermeester with their Rose Bowl heroics.

The shock: Nobody’s recruiting board is in more depression than that of the Washington Huskies after DT Marlon Tuipulotu, UW’s former top recruit, flipped to the Trojans. It’s not like the Trojans haven’t experienced a similar type of stunner in the past. Although they never made an earlier formal announcement, it appeared on signing day that former prep superstars De’Anthony Thomas (Oregon) and Manti Te’o (Notre Dame) were first headed to Troy before a change of heart.

The marathon: So how many of you Trojans recruit-a-holics will wake up early Wednesday morning (5 a.m.) to watch the entire recruiting signing day festivities?

Family and Homecoming: The Trojans will celebrate Trojan Family Weekend by hosting Utah on Saturday, Oct. 14, and the following month by entertaining Arizona for Homecoming on Saturday, Nov. 4.

It’s uniform: No question one of the big selling jersey items prior to and during next season will be No. 14, the jersey number of Trojans 2017 Heisman Trophy candidate, quarterback Sam Darnold. However, will there be anybody wearing a No. 39 jersey, which is worn by returning placekicker Matt Boermeester, who just happened to kick the winning Rose Bowl field goal to defeat Penn State?

New Holiday: The San Diego County Credit Union Poinsettia Bowl is no longer after 12 seasons. The result could mean that the Holiday Bowl is moving to Petko Park, home of the San Diego Padres. The Trojans two visits to the Holiday Bowl have been – outside of a loss to Wisconsin and a victory over Nebraska – well received by Trojans fans.

On the scale: According to former Trojans All-Pac-12 tackle Zach Banner, the giant told media during last week’s Senior Bowl festivities that he weighted 380 pounds for the Rose Bowl. To his credit, Banner didn’t blame his weight on the Trojans trip to Lawry’s Beef Bowl prior to the Rose Bowl.

Still questioning: Penn State fans are still questioning why the Nittany Lions threw two deep passes near the end of the Rose Bowl Game, one of which resulted in an interception by safety Leon McQuay lll to help set up the Trojans winning field goal.

Just wondering: Considering all the preseason college football mags on newsstands, why hasn’t anybody devoted a magazine to spring football?

Swann song: In his monthly message to the Trojan family, USC athletic director Lynn Swann said, “Our head coach Clay Helton did an extraordinary job of keeping the football team together after starting 1-3. We finished the season ranked No. 3 so that sends a powerful message to future Trojans. USC now stands a little taller. We look forward to taking that Rose Bowl win and pushing that success into a great recruiting season and continuing the pursuit of Pac-12 and National Championships.”

Swann song – Part 2: Swann added, “We continue to schedule top competition. We start off next season with Western Michigan, a team which lost only one game, its bowl game to Wisconsin. We have Texas in the first month, and Stanford is early in week two. It will require us to take the learnings of last year and apply them to this season, so we are better at the start and give ourselves a stronger chance to play for a Pac-12 Championship.”

Looking live: Over the years, few sportscasters leave us a phrase or statement that identifies them as the voice of an event. “You are looking live” will always be identified with Brent Musburger who has announced that he is retiring from calling sports this week.

Looking live Part 2: Love him or hate him, at least Brent Musburger had the fortitude to give his opinions in a thoughtful and constructive manner. There was always the feeling here that Musburger brought a sense of “big game” atmosphere to a big or not-so-big sporting event.

Looking live Part 3: So what will Brent Musburger do in his retirement? Brent says he’ll move to Las Vegas and help his family start a sports handicapping business. Who knew?

From the heart: Best of luck to a really good guy, Rocky Seto, the former Trojans and Seattle Seahawks assistant coach. Rocky has decided to leave pro football and coaching and enter the ministry. From firsthand experience, he’s true to his faith and practices what he preaches.

The last word: There is nothing more exciting than the expected and unexpected when it comes to national signing day. You can bet that every team in the country will be claiming recruiting victory by day’s end; however, few teams will actually bring home the recruiting goods, and one of those teams is expected to be the USC Trojans, which will make the off-season until spring ball in March tolerable. Are you already counting the day?