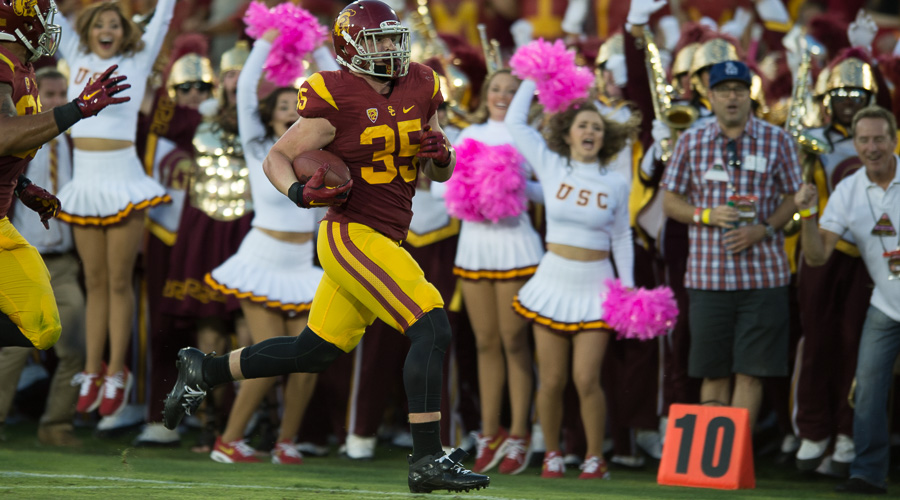 The evaluation – Part 2: Let’s start with the defense, shall we? Okay, they still aren’t the second coming of the 1969 Wild Bunch, but they stood up to the Utah offensive line, which was considered the most physical bunch outside of the Stanford and UCLA O-lines. It was a collective defensive effort by Troy, which allowed 353 total yards, and it certainly helped that the Trojans offense, through points, helped put pressure on Utah’s ball control style of play.

The Trojans defensive front helped make life hectic (3 sacks) for Utah quarterback Travis Wilson, the former San Clemente High signal caller. Of course, the Player of the Game on defense was true freshman inside linebacker Cameron Smith (photo above), who played like an upperclassman and recorded three interceptions.

The evaluation – Part 3: The most impressive aspect of the Trojans 42 points against the vaunted defense of the Utes was the ball control scoring drives of 88, 76, ad 92 yards. In this particular game against the No. 3 team in the country, the Trojans lived up to its preseason billing, combining big plays yet making long drives across hallowed Coliseum turf. Perhaps the light went on or probably more to the point, Clay Helton is establishing his own identity on the offense.

Yes, the Trojans offense had an identity against the Utes. It was a balanced offense, ball control with big plays, and, yes, even fullback Soma Vainuku finally found the end zone from scrimmage (1-yard TD plunge). Hallelujah and welcome back, No. 31.

The bottom line: This was unquestionably the best win of the season for the Trojans, and they did it with a throwback style of physicality on both sides of the ball. Whether they can keep it up the rest of the season remains to be seen, but certainly they are capable of being physical. It becomes a matter of consistency and “want to.” The road will not be easy, but they are capable.

Magic numbers: Because the Trojans already have two Pac-12 losses, they’ll need Utah to lose another Pac-12 game to control their own destiny in the Pac-12 South. Compared to Utah’s remaining games (Oregon State, at Washington, at Arizona, UCLA, Colorado), the reality is that the Trojans have the tougher remaining schedule (At Cal, Arizona, at Colorado, At Oregon, UCLA).

The game changer: No doubt about it, it was true freshman inside linebacker Cameron Smith’s three huge interceptions that changed the course of the game, one of which was a 54-yard, second quarter TD return of an errant pass by Utah senior quarterback Travis Wilson. Smith’s three interceptions gained a total of 122 yards.

Trojans head coach Clay Helton comments: On his team’s sudden emergence of physicality, Helton said, “ Believe me, we thank you all (the media) for that. We’ve been reading it and addressed it in the meeting. These guys want to prove to everyone what kind of team they are. Cody’s (Kessler) quarterback sneak and Soma (Vainuku) going in there (1-yard touchdown), if that’s not physical, what is?”

Utah head coach Kyle Whittingham comments: On his overall picture of the loss, Whittingham said, “In my opinion, that’s the best team we’ve played all year long – certainly from a personnel standpoint. Give them credit. It was tough to give them essentially three touchdowns on turnover and hope to have a chance to win against a team of that caliber. One was a pick six, another ended on the five. And to get no takeaways of our own. That was the difference in the game. Credit to them, good athletes and good players.”

Utah perspective: According to talented Utah linebacker Gionni Paul, “Wow, give them credit, they came to play today. We didn’t expect to get punched in the mouth like that. We knew USC was a great team with great talent. We knew they had faced adversity the last couple of weeks, but they played a good game against Notre Dame. We knew they would be ready tonight.”

Ronald runner: For the time being, the Trojans seem to have a productive running back combo in junior Justin Davis and true freshman Ronald Jones ll. However, it seems like just a matter of time or production before Clay Helton will have to seriously look at starting Jones, who averaged 8.0 yards per carry against the mighty Utah defense.

IMHO: With Kyle Whittingham’s name being prominently mentioned as a candidate for the permanent USC coach job, you have to wonder how the Utah loss played in the minds of the USC brass…if at all at this point.

IMHO – Part 2: There is something about the way Clay Helton is slowly molding his team into his image that may give him a dark horse shot at the job. He’s still way out in the periphery, but what if he could ace the schedule it the rest of the way? If he does, he should be considered by Trojans Athletic Director Pat Haden. The players absolutely love him.

IMHO – Part 3: According to Trojans linebacker coach Peter Sirmon regarding the Trojans strong and physical play, it lead back to Clay Helton. Sirmon said afterward, “Clay (Helton) has changed our practice format, and we’re able to work on technique.”

The barometer: On Saturday, the Trojans scored 42 points against Utah. The Trojans entered Saturday’s game averaging 38.3 points per game.

The barometer – Part 2: On Saturday, the Trojans defense gave up 24 points to Utah. The Trojans entered Saturday’s game allowing 21.3 points per game.

The flag is coming down: The Trojans were penalized five times for 49 yards. The Trojans coming into Saturday’s game were averaging 72.8 yards in penalties per game.

Tunnel runner: Leading the Trojans out of the Coliseum tunnel prior to kickoff was legendary fullback Sam “Bam” Cunningham, so it was appropriate that Trojans fullback Soma Vainuku dove over the top for his 1-yard touchdown against Utah.

Cover boys: Saturday’s official program cover featured offensive linemen Zach Banner, Max Tuerk, and Chad Wheeler. Ironically, Tuerk (out for the season) and Wheeler (concussion) didn’t perform on Saturday. Banner, who is normally a starter at right tackle but was moved to left tackle to replace Wheeler, was also ironically pictured in the upper left of the program cover.

Bowling for dollars: There were no representatives from any bowl affiliations on Saturday.

Counting bodies: Attendance for Saturday’s game against Utah in the Coliseum was 73,435. The last time the Utes played in the Coli (2013), the attendance was 64,715.

Southern California connection: If you were wondering about Utah coach Kyle Whittingham and his roots, it should be noted he was born in San Luis Obispo, California, and his late father, Fred, who played and coached at the college and NFL level, began his coaching career in 1972 as the head coach of the Alhambra (Calif.) High Moors, your humble scribe’s alma mater. Fred took moribund Moors program and turned it into an 8-1 team that went to the CIF playoffs.

Could he: As reported by the Los Angeles Times earlier this week, Utah coach Kyle Whittingham didn’t say he would or wouldn’t be interested in the USC coaching position. Whittingham said, “I don’t speculate on speculation.”

Could he – Part 2: Until I hear the word “no” as in “I am not interested in the Trojans job,” I thought the comment spoke for itself. If I were a Utah fan and wanted to keep Kyle Whittingham around, I think I’d be a little nervous by the response.

Could he – Part 3: One potential roadblock if the Trojans are interested in Kyle Whittingham as their next head coach. Kyle’s son, Alex Whittingham, is a sophomore linebacker for the Utes, and that might be enough for dad to stay as the head coach of the Utes.

For Pete’s sake: It was neither a shocker nor just plain no-brainer that former Trojans coach Pete Carroll said in a polite way he was not interested in returning to USC as the head coach. Carroll had a College Football Hall of Fame career, but quite frankly, I am pleased at this stage of his coaching career he is staying put in Seattle. It’s time to move on from Pete Carroll and his era.

In memory: Trojans hearts are hurting over the loss of “Mr. Trojan,” Nick Pappas, who passed on Friday at 99-years-old. Pappas was 59 years a Trojans and was instrumental as a player, coach, and athletic department administrator. Nick will also be remembered for building USC’s Trojan Club donor group into the most successful organization of its type in the country.

In memory – Part 2: Ironically, Mr. Trojan, Nick Pappas, will also be remembered for doubling for actor Pat O’Brien as Knute Rockne in the football scenes of the 1940 movie, “Knute Rockne—All-American,” which told the story of the legendary Notre Dame football coach.

The last word: Next weekend, the Trojans travel to the Berkeley to play the Cal Bears (5-2 overall, 2-2 Pac-12), and it’ll be The Bay Area Weekender. Game time is 12:00 p.m., and when was the last time the Trojans had that kickoff time?