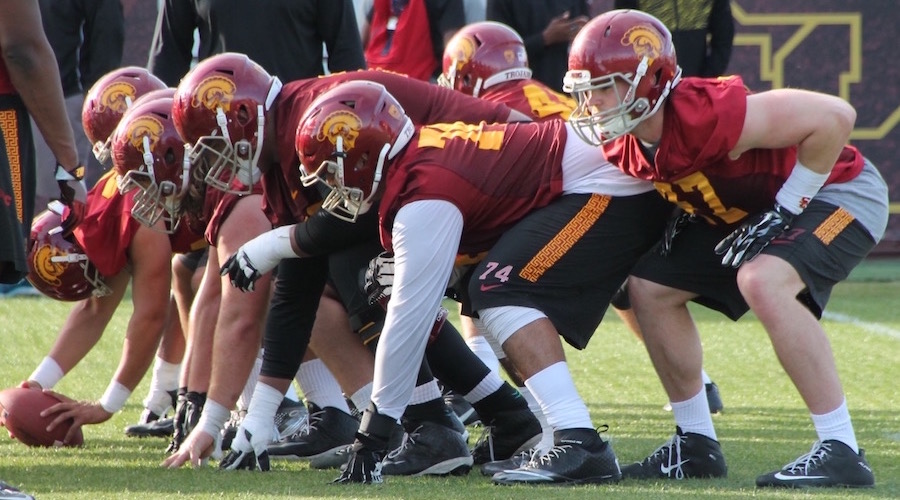 Scrimmage thoughts: The Trojans held their first full scrimmage on Saturday morning in the Los Angeles Memorial Coliseum, and the analysis here is that the Men of Troy confirmed a noticeable in crease of finishing blocks on the offensive line and some big, punishing hits on defense.

Scrimmage thoughts – Offensively: The Trojans had their moments with the quarterbacks showing accuracy and good decision-making, the running backs aggressive running and cutting, and the offensive line continuing to show increasing physicality. Offensive line coach Neil Callaway continues to rotate guard tandems with one set being senior Jordan Simmons and sophomore Chris Brown and the other set consisting of juniors Damien Mama and Viane Talamaivao. The Trojans are in a good place with their guards.

Scrimmage thoughts – Offensively Part 2: Perhaps an offensive nugget in the rough was fullback Reuben Peters (Los Angeles Loyola), a returning walk-on who played inside linebacker last season. Peters had some very impressive lead blocks for the Trojans tailbacks, and let’s not overlook the hard running of budding sophomore tailback Aca’Cedric Ware. However, don’t be too mislead, Justin Davis and Ronald Jones ll were still very impressive. And, yes, the Trojans were throwing to their tight ends.

Scrimmage thoughts – Defensively Part 3: Defensively, the Trojans had their moments under Clancy Pendergast’s new schemes and put some pressure on the quarterbacks. Senior defensive end Jabari Ruffin and senior safety Leon McQuay lll continue to thrive with the return of Pendergast as their DC. Both Ruffin and McQuay look very comfortable and effective after being reunited with their once former defensive coordinator. And let’s not overlook sophomore defensive end Rasheem Green, who is living up to the hype. Green looked very active.

Final analysis: If there was one word that should fire up Trojans fans regarding Saturday’s scrimmage is that the team looked vastly more “disciplined” than past seasons. There were no turnovers on offensive, which is a plus, but on the flip side there were no takeaways either by the defense or forced fumbles, but there were a couple of sacks along the way. All in all, it was a good first scrimmage, and Clay Helton, who was pleased with Saturday’s effort, lived up to his promise this week that the scrimmage would be “bullets flying,” which is a sharp contrast to previous springs. According to Helton, the Trojans are way ahead of where he though they’d be at this point, and the coach wasn’t just blowing smoke into the Los Angeles atmosphere.

Sickening: There is really no other way to describe it when Clay Helton announced on Saturday that junior defensive lineman Kenny Bigelow suffered another ACL right knee injury during a run drill on Thursday. It wasn’t from direct contact, so Lady Badluck just reared her ugly head…again. It’s being estimated that Kenny will be out 7-6 months. Considering he’s gone through this before, no wonder No. 95 was tears on Thursday, and who can blame him? Life ain’t fair.

The revelation: The return of running backs coach Tommie Robinson after his stint with the Texas Longhorns was personal. Robinson said this week that when he got the phone call from Clay Helton extending a job offer to Troy he said, “Yes,” immediately. Upon landing back in Los Angeles and walking down the ramp into the terminal, Tommie knew he had made the right decision. He said, “It honestly felt like being back home.”

The revelation – Part 2: Tommie Robinson told a media gather this week that when Clay Helton got the job and even extended any offers, his former 2013 Trojans coaching mates like Clancy Pendergast, John Baxter, were asking each other if “they had heard anything from Helton.” Robinson said there was sincere excitement and anticipation of getting the old Trojans coaching staff of 2013 back together.

The revelation – Part 3: While at Texas, Tommie Robinson tried to recruit Trojans tailback Ronald Jones ll. Robinson believes his return to Troy to coach Jones was meant to be. Robinson praised his sophomore talent, but said he has a ways to go to be a complete football player. The good news is that Jones has told Robinson he wants to be coached and wants to be the best.

The student: One of Clay Helton’s great strengths is that he is willing to learn from experienced coaches, and one of those is former Trojans head coach and Hall of Famer John Robinson, who talks football when he occasionally walks into Helton’s new CEO coach’s office.

In the blood: That was quite a seen of “family” this past week when Clay’s Helton’s father, Kim, a former highly respected offensive line coach in his own right, watched the Trojans offensive linemen go through their paces under first-year line coach Neil Callaway.

FYI: If you weren’t aware, Neil Callaway was once Kim Helton’s offensive line coach at the University of Houston when Kim was the head coach of the Cougars.

Back in the Jim: It was great to see back at practice this week former Trojans quarterback great Jim Hardy back in practice after his own health challenges.

Gone but not forgotten: No longer in the Trojans spotlight until the NFL draft, former quarterback Cody Kessler moved around spring practice this week about as nondescript as possible.

Center of attention: It was also great to see San Francisco 49ers offensive lineman and former Trojans center Marcus Martin, who looked in great shape. There is no more baby fat on Marcus, and, boy does he look chiseled. Oh how the Trojans missed Marcus after he decided to head to the NFL after his junior season of eligibility.

The Key: Wide receiver Keyshawn Johnson Jr. (Calabasas, Calif./Calabasas), the son of former Trojans All-America receiver Keyshawn Johnson, announced this past week for the Nebraska Cornhuskers. It’s always a little sad when a Trojans legacy spurns the father’s alma mater, but Nebraska head coach Mike Riley was Key Sr.’s offensive coordinator during the mid-1990s, and they are quite close.

The Key – Part 2: Keyshawn Johnson Jr.’s verbal to Nebraska isn’t shocking but probably more disappointing. Of course, the reality is that a verbal in March doesn’t always hold up through February. Maybe it’s a done deal and maybe it isn’t, but it’s not like the Trojans aren’t loaded at wide receiver for the foreseeable future. I do, however, think young Johnson’s verbal to Lincoln will probably stick.

The ring: Stanford has been at the forefront of Pac-12 football, especially as it pertains to its physical offensive line. So it should come as no surprise that the academic-minded Cardinal, who had their way last season with the Trojans, would do some bragging when it came to their Rose Bowl rings. In honor of its most recent Rose Bowl visit, Stanford has inscribed their Rose Bowl rings “intellectual brutality.”

The full Monte: The NFL’s Jacksonville Jaguars have hired former Trojans defensive coordinator and veteran NFL coach Monte Kiffin as defensive assistant coach. Well, you have to give the octogenarian credit, he keeps on ticking…and collecting a paycheck.

Happy camper: Ran into former Trojans defensive corner and media analyst Darrell Rideaux this week at practice, and the polite but outspoken one is very high on the Trojans coaching staff, especially with DC Clancy Pendergast.

Foreshadowing: The NFL passed a one-season experimental rule that states if a player gets a second personal foul during a game, that player will be ejected from the contest. So how long will it take before the Pac-12 or NCAA pass a similar rule?

Time is of the essence: Former Trojans All-Pac-12 linebacker Su’a Cravens ran a reported 4.65 in the 40-yard dash at USC’s Pro Day, which would be acceptable for an NFL linebacker but is very pedestrian for a safety, which some have said is Craven’s best position. Cravens 40-time may create more questions than it does answers, which will make Su’a’s draft round a real mystery.

The last word: It has been said many times here and by others that former Trojans running back Soma Vainuku was more than just a great special teams player. At Pro Day last Wednesday, Vainuku weighed in at 242 and ran an impressive 4.59 in the 40. In an I-formation, fullback, Vainuku may have been a likely starter, but in this day systems are everything. It won’t be a shock if Soma makes an NFL roster and sticks around for a while.