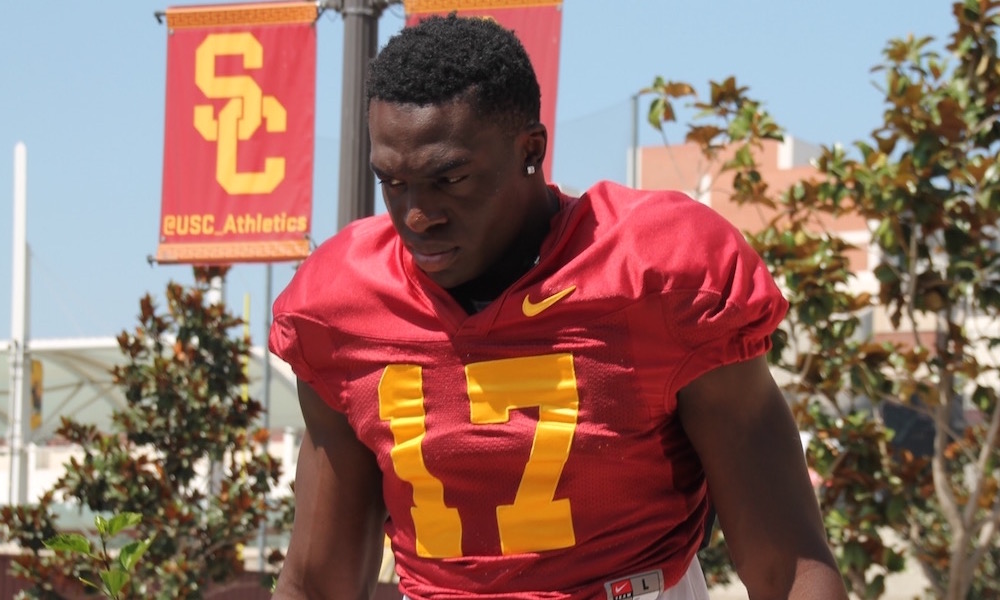 When the lists of spring breakout players were circling prior to spring ball for the Trojans you didn’t see Josh Imatorbhebhe mentioned.

It’s not that there weren’t expectations for Josh, or even opportunity at the receiver spot, it’s just that not much had gone right on the field for Josh during his first two seasons at USC and there weren’t really any signs of things turning around.

As we’ve reached the midway point of spring ball practices, however, you would definitely include him as one of the players who has delivered more than expected.

There were multiple plays made in the scrimmage last Friday, including a nice run down the sideline after a short catch from Matt Fink. There have been good hands shown in red zone drills, although he was removed from practice on Tuesday with dizziness after a couple drops early in the day.

Imatorbhebhe doesn’t think the improved practice performance so far is an accident, he thinks it’s part of a “no distractions” mindset he has embraced which has helped allow his obvious natural skills to translate more into his performance.

“I was worried too much about what other people were saying,” Josh said. “What social media was saying. And I finally got to the point where I realized it just doesn’t matter. It’s all a distraction, that’s all it is, and it just doesn’t matter. It wasn’t anything that anybody told me, it was just me figuring it out. It was during the Cotton bowl practices where I just said “screw it” and actually had some pretty good practices but they were closed so nobody was there to see them.

“I’m really feeling things slow down this spring. I may not have a great practice every single day but I feel it more and more. It also helps to be healthy right now, I’m definitely more healthy than I was last year, that was another distraction. I’m so much more focused now, it wasn’t any specific thing I needed to do, just much more confident now. The next step is to become more consistent.”

USC coach Clay Helton says “the light is coming on playbook-wise for Josh and it’s allowing him to play faster” to which Trojan OC/WR coach Tee Martin says “Josh is the fastest guy on our team”. There is also the vertical leap. Twice in the last few years Imatorbhebhe has gone viral with impressive leaping achievements, the first came in HS when he put up a 47” vert at The Opening finals in Oregon, and then came this recent off-season when he was taped leaping onto some bags stacked high in the John McKay Center.

? That time when Josh Imatorbhebhe levitated. ?

USC WR @JoshBhebhe has got some SERIOUS hops. ? #FightOn pic.twitter.com/7ybrt0ts5X

Now it becomes a matter of taking those substantial skills and getting production as to this point Josh has two catches total on his resume at USC. There isn’t a focus right now on a starting spot, it’s more a case of working to get better and letting the pieces fall in place.

“The best thing I can do for myself is not really try so hard for that,” Josh said. “I may look up at one point and I’ll be starting, and that will be the result of the work that I put in. Work is work, 1st team or 2nd team, it doesn’t matter. I want to get better, that’s it.”