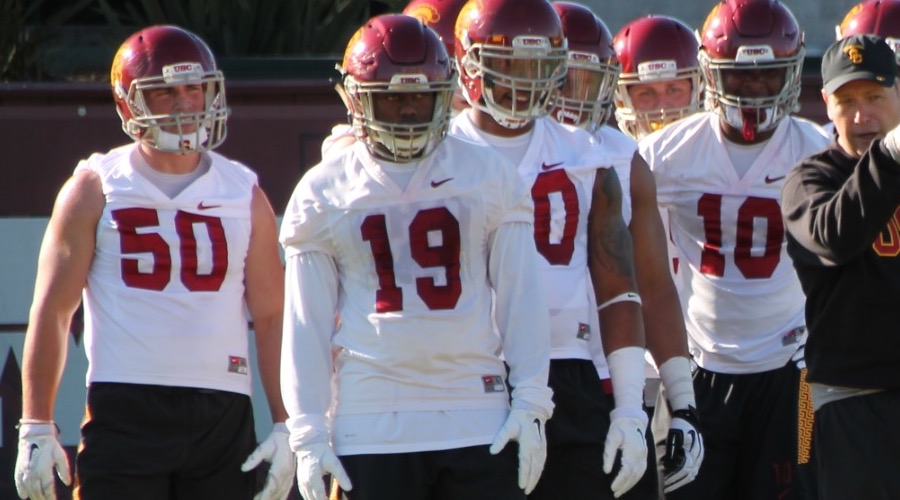 In a spring at USC that was filled with plenty of surprise storylines, the emergence of senior linebacker Michael Hutchings certainly stood out as one of the most noteworthy. Having spent the overwhelming bulk of his career serving in a backup role, with a total of just two starts to his credit, the once-highly touted prospect out of Concord (Calif.) De La Salle was one of a number of veterans who showed signs of renewed life with the return of Defensive Coordinator Clancy Pendergast, whom he played for in 2013.

With Cameron Smith sidelined after suffering torn knee ligaments this past fall, it was Hutchings who was called upon to run with the first-team defense at the MIKE inside linebacker position when spring camp opened up, and spurred on by a competitive atmosphere, that’s where he would stay throughout the 15 workouts.

“With Cam out, everybody just had to compete,” said Hutchings, who has compiled 52 tackles and one interception in his career at USC. “There wasn’t really a definite starter or anything like that coming in, and that was just an opportunity that I think the whole room pounced on. It turned out to be something that made all of us better.”

Standing 6-foot-1 and 225 pounds, Hutchings provided the No. 1 defense with a smart and steady presence, looking more than at home in the same 5-2 scheme that he lined up in as a freshman.

“He was just a young pup when I was here the last time, and I liked Mike then,” Pendergast said. “He’s always a guy that would come in and fill a role, and he’s very much a team guy. So, I know that he’s one of the guys that I can count on. He’s done a really good job this spring.”

Like many other seniors on the team, Hutchings was thrilled when he learned of Pendergast’s hiring this past January. The architect of a unit that finished atop the conference in total defense in 2013, this time around Hutchings is receiving the added benefits that come with working directly with Pendergast, who, after handling the defensive backs in his prior one-year stint at USC, now leads the inside linebackers through their paces.

“Even in just these five or six weeks he cleaned up major portions of our game that will help us tremendously,” Hutchings said. “Last time he was here he worked with the DB’s, but him working directly with the middle guys, I think, was a huge help with us being the center of the defense.”

And Hutchings developed in other ways this spring, too. As a senior who has seen it all in his time at USC, he made it a priority to embrace a leadership role for the first time.

“Coach Helton told me before the spring, ‘You’re the oldest guy out here, you’ve been with Clancy before,’” Hutchings said. “That was one of the main things that he preached to me, Quinton [Powell] and Kenny [Bigelow] – those guys that have been here before – just be on the young guys.”

With Smith – the reigning Pac-12 Freshman Defensive Player of the Year – expected to return in time for fall camp, Hutchings undoubtedly figures to have a tall order on his hands in August as he, once again, fights for playing time. But one thing that he has in his favor is that he’s more than capable of also lining up at the WILL inside linebacker position, which was manned primarily by Powell this spring, and which shares plenty of similarities to the MIKE spot in Pendergast’s scheme.

“A lot of the communication is carried over between the two and three positions inside,” Pendergast said. “He is definitely smart enough to play there, to give us some flexibility. I’m glad that we have him.”

It’s clear that Hutchings is a player whom Pendergast values as a potential key piece of the puzzle in his defense, but with plenty of time remaining before the start of his final season in a Trojans uniform, Hutchings knows that he still has more to prove, and that he doesn’t have a second to waste.

“I’m not getting anything back,” Hutchings said. “There isn’t a, ‘I’ll work on that next year, or I’ll work on that some other time.’ I have to get everything fine-tuned right now. It’s really critical for me to have a strong summer for me to go into fall camp as the best player I can be to give to my coaches, so they can find a place to put me on the field.”