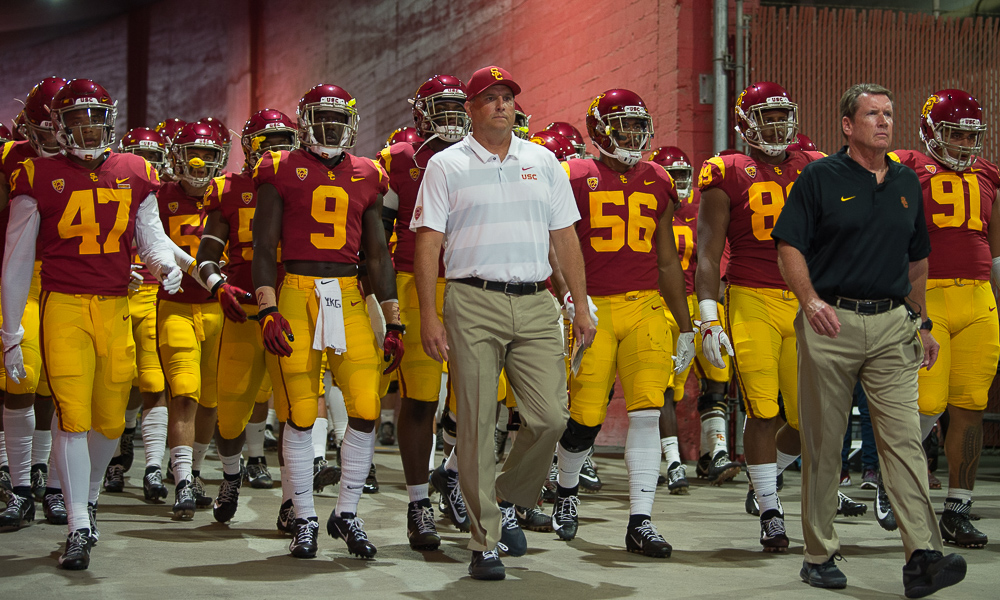 Clay Helton held his weekly media call to review the UNLV game and look forward to Stanford, here are some of the comments from the call.

* After reviewing the film I thought all three of our running backs were extremely physical. They were an extreme positive of our offense.

* We had zero turnovers and protected the ball well. For a younger team on a day when we struggled in the red zone we did not shoot ourselves in the foot.

* I enjoyed watching our pass rushers get after the quarterback with 5 sacks. We got them off the field on 3rd down (5-15).

* On special teams we had Chase McGrath hit 5-5 field goals, Alex Stadthaus kicks 7 of 10 kickoffs for touchbacks, we averaged 21 yards per punt return, and we had a long KR by Stephen Carr.

* I thought we had good substitutions, that kept guys fresh, we rotated a lot and it helped keep guys healthy, nobody left due to injury.

* For things we can look to correct, we need to get touchdowns when we get in the red zone, need to make the plays down there. We need to eliminate giving up the explosive plays, two plays we gave up cost us 14 points. Our ability to stay on the field was good not great (7-16 on 3rd down). Our kids take pride in stopping the run, giving up over 300 yards is not us, there’s a sense of urgency to get that fixed. Our punt game needs to do better.

Helton then took questions from the media:

You gave up 300 yards rushing, is that something that can get fixed in one week?

“We’ve got to get it fixed quickly and take steps of improvement by Saturday. That’s why they put “coach” in front of our names because we need to find a way to get things fixed and coached up. It was a good opening day but it could have been better. The good news was we got experience for a lot of guys. If you look at our defense stopping the run against Stanford the last two times, first down run efficiency needs to improve.”

“We saw a lot of pressures so we ran a lot of RPO’s and I thought JT made some good decisions on the perimeter. That last touchdown was a decision by JT after the LB left the box. He ended up with the most passing yards by a USC QB in his debut. There were a couple decisions he would want back but I couldn’t be more pleased with his demeanor. He was extremely comfortable, I think he had one forced ball in 35 attempts, and I loved the way he spread the ball around to 8 different guys.”

We saw a lot of freshmen, did the new redshirt year allow you to play more guys?

“Definitely. There are some guys we know can play now, some we’re evaluating to see if they are ready now or maybe we wait until the end of the year to see if we need them more. It allowed us to roll a lot of guys out there to evaluate.”

Evaluate the play of Isaiah Pola-Mao

“He tied for the team lead in tackles, he got the ball on the ground early with a forced fumble. He had one mistake that he will learn from (reverse).”

There were several equipment warnings called on the Trojans, what were they?

“You have to have your knee full covered, it’s a new rule this year. I didn’t know they were gonna call it so tight but it’s about player safety and if they see there is no pad over the knee, if it’s rolled up, they will take you out of the game for a play to get it fixed.”