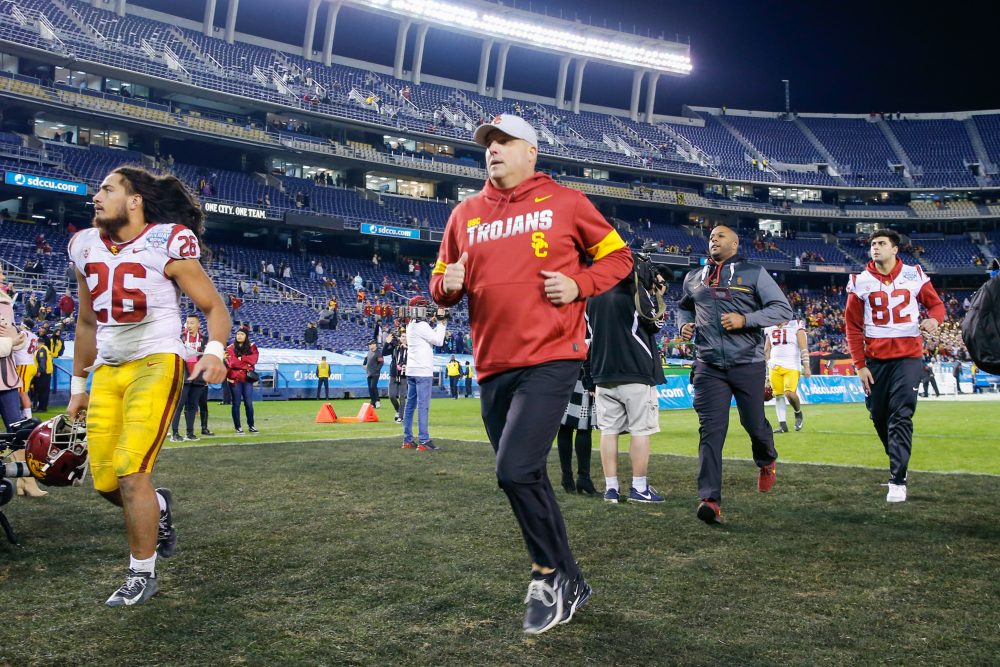 USC football coach Clay Helton, basketball coach Andy Enfield and athletic director Mike Bohn will be the latest high-profile university figures to make monetary concessions in the ongoing financial struggle caused by the coronavirus pandemic. As universities and athletic programs across the nation continue to be battered financially, coaches and administrators have taken pay cuts or returned salary at a number of universities schools.

According to Ryan Kartje of the Los Angeles Times, Bohn, Helton and Enfield will return a combined $1 million dollars in salary to USC, in a strong show of support to the school.

Helton is at least the fourth Pac-12 coach to do something like this, as Colorado head coach Karl Dorrell and Oregon head coach Mario Cristobal have taken 10% salary reductions, and Washington State’s Nick Rolovich took a 5% pay cut and a suspension of bonuses and incentives.

The decision comes shortly after USC president Carol L. Folt delivered her first State of the University address, where she said USC is “facing a $300-500 million operating shortfall through June 2021, associated with costs and lost revenues, grants, and gifts due to the pandemic.” Folt accepted a 20% salary reduction last month, as USC announced a hiring freeze as well. She also noted that “leading experts are saying it will be 12 to 18 months before we see an economic rebound.”

And with the football season still up in the air, it’s difficult to say how deep that economic hole could become. It is unclear if the 2020 football season will happen, or what shape it could take as schools are pushing hard to find a way to make games happen either on time or with a delayed or shortened season. But at this point there are no clear answers as to how that can or will happen.

USC has taken several steps to help the community during this pandemic. It announced the sale of “We FIGHT as ONe” merchandise, and committed to matching the sale of every shirt and sweatshirt as a donation to a healthcare worker at Keck Medicine of USC.

On Friday, USC announced an arrangement for corporate partner Subway to provide 400 Subway sandwiches to the nurses at Keck Hospital of USC for lunch of Monday, May 4, as it is the first day of National Nurses Week. Subway’s Santa Ana franchise owned by Pratik Patel, a big USC sports fan, will provide the sandwiches and will offer a significantly discounted rate on specific orders made by Keck healthcare workers throughout the pandemic.