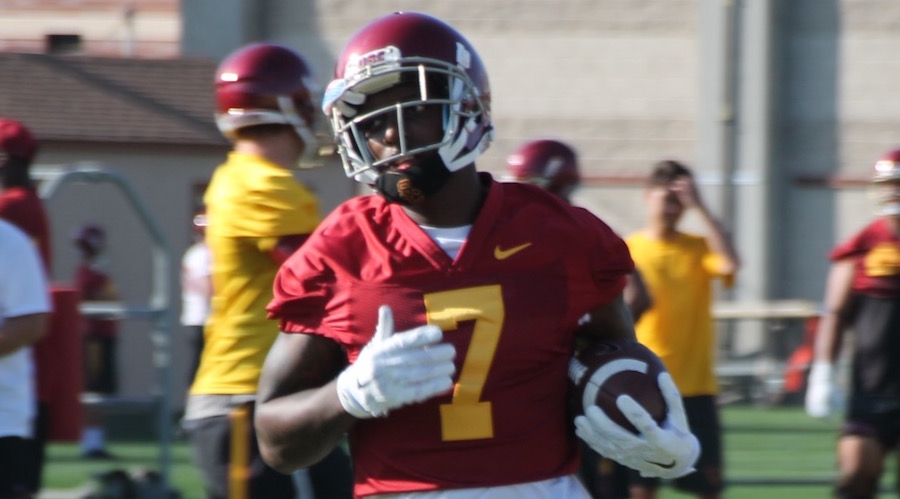 The expectations have been there for Steven Mitchell since the day he stepped foot on the USC campus as an explosive playmaker from the slot receiver position, but injuries have tempered the results on the field through his first two years.

It’s not like Mitchell has put up bad numbers with 44 catches and six touchdowns in his career but the potential has always been there for more. Take the first four games of last season, for instance, when Mitchell had 13 of those catches and all four of his 2015 touchdowns before an ankle injury forced him to miss games in the middle of the season. This was after a serious knee injury that forced him to sit out his first year at USC, and a sprained knee that limited him as a redshirt freshman.

All of that is seemingly behind him now, however, as Mitchell is healthy and looking strong through the opening days of fall camp practice.

“I’m the healthiest I’ve ever been, to be honest,” Mitchell said. “I gained five pounds so I’m 200 pounds now (smiling), and I’m actually faster. So all of that is helping my confidence more to go across the middle and get those hard balls, I’m definitely ready.”

A healthy Mitchell is good news for the Trojan offense which will feature taller receivers JuJu Smith-Schuster and Darreus Rogers on the outside with the speedy Mitchell doing his work underneath and offering a downfield option.

“I challenged him (Mitchell) to make this his best year,” said USC coach Clay Helton. “It’s his time to shine, his time to be that guy who we push the ball deep to. He’s treating each day like it’s a game and he’s going hard.”

There is a lot of excitement around the program about the possibilities of a new offensive braintrust, led by Helton as the head coach with a new offensive coordinator in Tee Martin and a new QB coach in Helton’s brother, Tyson, who is expected to have a lot of input in how things are done. The presence of Martin as the play caller offers a unique opportunity for Mitchell and the other receivers because it’s a coach they know so well.

“Having Tee as the offensive coordinator is going to be so helpful for us because we’ve been with him for so many years and he already knows what we see on the field,” Mitchell said. “You’re going to see guys getting downfield, crossing routes, and I like seeing how the ball is being distributed and the chemistry I have with the quarterbacks. It’s really exciting for me because I know what I’m capable of and I’m ready to get out there and do it.”

Another difference we’re seeing at the receiver spot this year is an abundance of bodies. Depth at the position was lacking at times in the past but not so now as receiver is as deep as any position on the team, and one of the benefits of that, according to Helton, is the ability of the front line players to go as hard as they can with the knowledge that they can take a break when needed because there are other players available.

“It’s really different in our receiver room,” Mitchell said. “We used to have a chair open here, a couple open chairs there, and now there’s no seats open, we have to bring seats in. It’s good to have that kind of depth in there.”