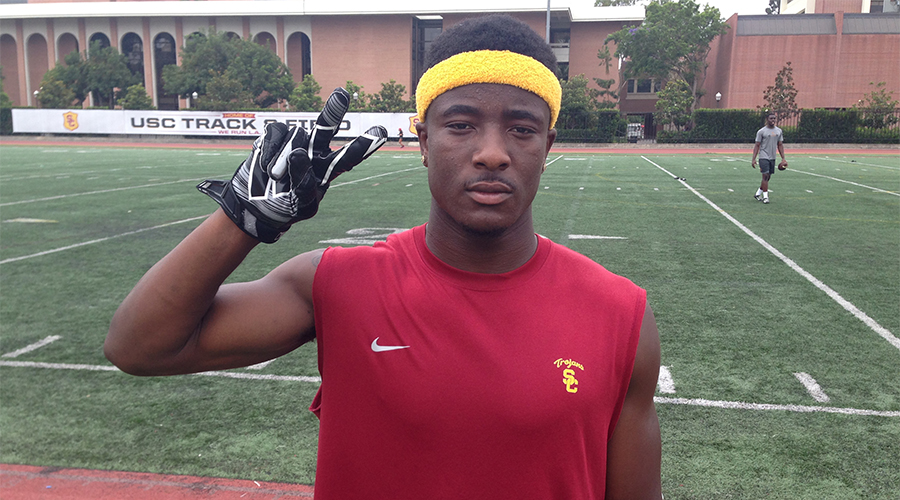 Having made his way back to the football field after missing the entire 2015 season due to hip surgery, Ajene Harris is looking like a potential key contributor for the Trojans these days – only it isn’t at the more familiar wide receiver spot that he showed real promise at as a freshman, but at cornerback.

With the Trojans low in numbers in the secondary, the redshirt-sophomore flipped over to the defensive side of the ball late this past spring after offering up his services there to USC head coach Clay Helton. It was a move that many figured to be temporary, but he wound up showing more than enough to give Helton reason to ask him to remain at the position this summer.

Whether or not the change becomes permanent, however, remains to be seen.

“I’m not really sure right now,” said Harris, who stands 5-foot-11 and 187 pounds. “Meeting with Coach Helton after the spring, he told me to just continue to go to the defensive meetings, and to keep learning over there. I’m already familiar with the offense, so he wants to see how I progress on defense, and to see where it takes me heading into fall camp.”

With Adoree’ Jackson absent up to this point because of his track and field obligations, Harris has been taking extensive reps with the No. 1 defense at cornerback during the player-run practices on campus, performing well in coverage, and providing hope that he can help add some depth at a vital position of need that also includes players like Iman Marshall, Isaiah Langley, Jonathan Lockett and safety/cornerback C.J. Pollard, not to mention incoming freshmen Jack Jones and Keyshawn Young.

Of course, it probably shouldn’t come as a surprise that Harris has been able to make such a smooth transition to the defensive backfield. In leading nearby Los Angeles (Calif.) Crenshaw to the 2013 L.A. City Section Division I championship as a high school senior, he drew most of his acclaim for his play at quarterback, but he was just as impressive on defense at both cornerback and safety.

Throw in the fact that, prior to his arrival at USC, Harris hadn’t lined up at wide receiver with any degree of regularity since back in his Pop Warner days, and it’s plain to see that he’s a uniquely versatile athlete on the football field.

“I’m pretty used to it,” Harris said of his ability to bounce between different positions. “It’s really just getting to know the plays, and getting to know everybody around you, and what they’re comfortable with doing. I feel like every position is natural to me. It just really comes with sitting down, doing the extra work, getting comfortable with the plays, and then looking at NFL film and looking at how the professionals do it.”

Playing a pivotal role in his transition to cornerback has been USC defensive backs coach Ronnie Bradford, as well as defensive coordinator Clancy Pendergast, both of whom have spent extensive time with Harris in the meeting room.

“My relationship with Coach Bradford and Coach Pendergast is good,” Harris said. “They really sit down and explain different things about the defense to me, and they keep me on a path where I’m just continuing to progress.”

Perhaps most crucial of all to Harris’ recent development, however, has been his health. Jumping back into the swing of things full-time this past spring, he’s made a concerted effort to now take the next step, working himself into what he believes is the best shape of his career.

“I’m 150 percent,” said Harris, who was also hampered by a hamstring injury during his initial season on campus. “I feel really good right now – better than ever. Now I’m just trying to keep improving in the weight room, just getting more range of motion, getting more flexible, and just getting stronger really.”

Restored not only physically, but also mentally, Harris is motivated, in part, by a renewed appreciation of the game that he severely missed being a part of while standing on the sideline last season. And with that added motivation pushing him, he’s determined to continue to do everything that he can to ensure that he can play a part in helping the Trojans find success on the field this coming season – regardless of where he’s lining up.

“You know, I grew up in Los Angeles, and this is my dream school,” Harris said. “It’s pretty much a pride thing. I just want us to be back on the map, so I’m willing to help out wherever they need me.”