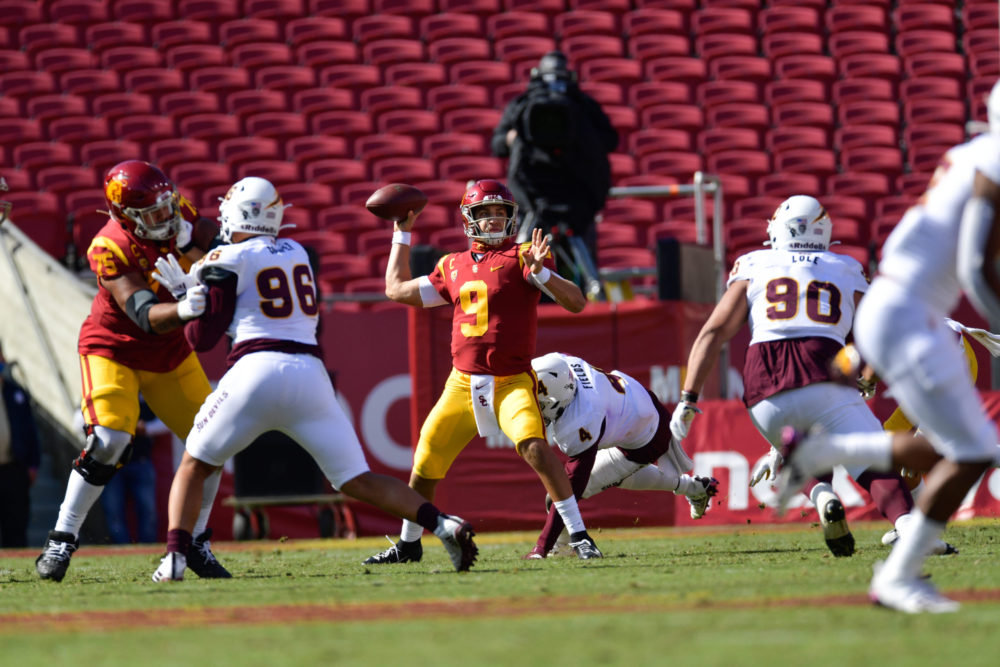 With 1:26 left in the fourth quarter and trailing 27-21 against Arizona State, USC held the ball at the ASU 21 yard line and faced a 4th-and-9. On Tuesday morning, USC offensive coordinator Graham Harrell laid out exactly how the Trojans went from that situation, to Drake London standing in the back of the endzone with the football and USC about to kick a game-winning extra point.

USC had just had a penalty walked back five yards, which turned a 4th-and-4 into 4th-and-9. On that 4th-and-4 plays, the Trojans began in a two-by-two formation and shifted over into a three-by-one — where two wide receivers on either side of the offensive line became three to the right side and one to the left.

On 4th-and-9, USC again sent two wide receivers to either side — Bru McCoy split wide left with Amon-Ra St. Brown inside of him, and Tyler Vaughns split wide right with Drake London inside of him.

With the play clock not a concern, Slovis clapped for the snap in order to either draw Arizona State offsides or get a look at what the Sun Devils planned to do defensively. Instead, center Justin Dedich held the ball and Slovis turned to the sideline to get some new information from Harrell.

“We were in two-by-two and we hard counted, just to see what we were going to get,” Harrell said. “When I saw the split safeties and the safety to the field was kind of wide, that’s when we switched formations.”

The switch called St. Brown from the left side to the right side of the formation, as London slid farther inside and St. Brown settled between he and Vaughns. And that created the matchup Harrell and Slovis wanted.

The switch meant that Arizona State cornerback Jordan Clark moved out onto St. Brown, while linebacker Kyle Soelle matched up against London. St. Brown and Vaughns positioned outside of London also meant safety Kejuan Markham had to line up on the hashmark, with London a few steps inside of it.

“When I saw those two safeties pretty wide, I knew we’d have Drake one-on-one with the linebacker and that’s a bad matchup, I don’t care who the linebacker is,” Harrell said. “As soon as we saw the coverage, I knew where the ball was going to go and I had a lot of confidence we were going to make it because the two guys that were involved in it were Drake and Kedon.”

Harrell said it’s the offense call that they’ve used more than any other during his time at USC.

“It’s a play we’v executed at a really high level a lot of times,” Harrell said.

Harrell said that he believes the biggest reason the play worked wasn’t so much that it was the perfect play call against the defense. Rather, it’s a play the USC offense can execute against anything.

“I think in that situation, too often people want to call the perfect play,” Harrell said. “When in reality, in my mind, you have to call what you’re good at, and that’s what those kids are going to execute…Just in general over the last two years, that play is probably the play we’ve had the most success on.”

The ASU safety worked his way back toward the middle of the field and London just as Slovis let the ball go, but the position he had to take pre-snap and the attention he gave outside to Vaughns and St. Brown gave London enough space to stay inside of him. While he had a swipe at the ball, it was placed too perfectly and London finished the play with a strong catch through contact.

“That’s a throw I think that Kedon can make and a play that Drake can make most of the time,” Harrell said. “So that’s why we switched to that formation and called what we called and the two kids made a heck of a play. It was a good throw, especially considering the situation. I think Kedon definitely made a great throw, but the catch was probably even more impressive than the throw, just with the guy swiping at his arm. To be that strong and still find a way to hold onto the ball in that situation is really, really impressive.”

Ultimately, it’s a perfect example of the damage London can do to a defense and how important he’ll be for the USC offense this season. He finished the game with eight receptions, but he might never have a bigger one than that.

“If we can get Drake matched up on a linebacker-type player, that’s a win for us in our opinion,” Harrell said. “That’s what we had. Kedon threw it with confidence, and threw a good ball. And Drake made an unbelievable catch.”