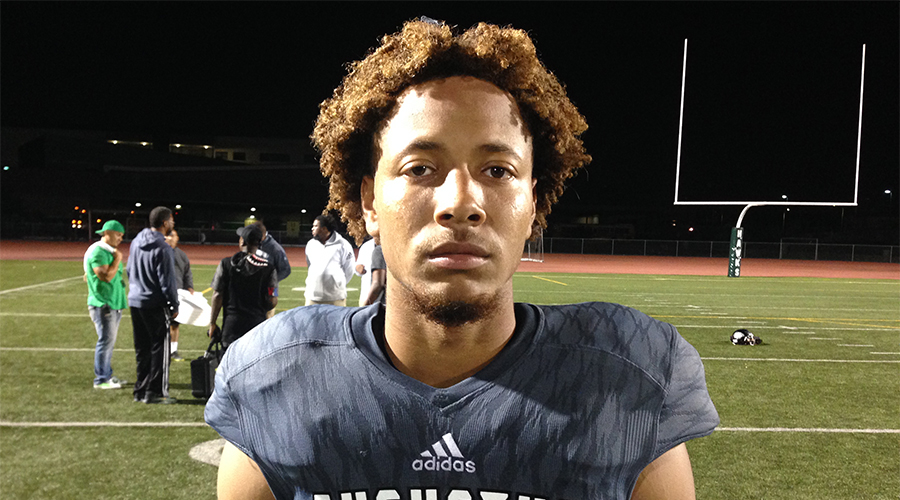 In matchup that some think might have been a potential preview of the Los Angeles City-Section Division II championship, Class of 2018 star wide receiver Jalen Hall did more than his part in helping a loaded Los Angeles (Calif.) Hawkins squad come away with a 34-22 victory over Los Angeles this past Friday night, improving to a perfect 8-0 in the process.

With less than five minutes left in the contest, however, the Hawks found themselves trailing 22-21 following a L.A. High touchdown. But on Hawkins’ ensuing drive, and with his team facing a 4th-and-8, it was Hall who came up with the play of the game, reaching up high to make a juggling first-down catch on a ball that appeared to be sailing out-of-bounds. Just a few plays later, Arizona-commit Greg Johnson ran for an eight-yard touchdown, and the Hawks would never trail again.

“I just had to make a play,” Hall said of his clutch 4th-down reception. “No matter what, I knew I had to grab that. That’s what great receivers do.”

Hall has made a habit of coming up with big plays for his team in his time at Hawkins. And while it’s usually at wide out, against Los Angeles, he actually made his presence felt in a major way at safety also, coming up with a crucial interception as well as a whole host of tackles. This, despite the fact that prior to Friday night, the last time that he took any snaps on the defensive side of the ball was last season.

“This was my first time out there this year at safety,” Hall said. “Our normal safety was injured, so I was up next. I knew I had to get the job done. Whatever the coaches need me to do, that’s what I’m going to do, and I’m going to go hard at it.”

Make no mistake, though, when it comes to the next level, Hall is a wide receiver all the way. Standing 6-foot-3, 200 pounds, he brings a truly unique combination of size, speed, athleticism and soft hands to the position.

Regarded by many as the top wide receiver prospect in his class, Hall has an offer from virtually every big time power around. And while he’s already checked out a number of schools unofficially, including USC, Alabama, Boise State, Michigan, Notre Dame, Tennessee and UCLA, he’s still nowhere close to narrowing things down at this point.

“There are a lot of coaches talking to me all the time, but I’m still taking everything slow, just trying to figure out what’s best for me,” Hall said. “I’ll talk to every school as I go through the process, figure out where I can be used best at, and how I can get the job done and do well in college – and get to the league, because that’s where I’m trying to go.”

One program Hall has been able to get fairly familiar with already is USC. After all, with the university sitting less than three miles from Hawkins, he’s been able to take a number of quick trips up to campus, and he’s developed a solid relationship with the Trojans coaching staff.

“I mostly talk to Coach Tee Martin and the head coach, Clay Helton,” Hall said. “I’m in contact with them probably every week. They talk to me just about coming there and competing. Of course it wouldn’t be easy, but if I’m going to start, I’ll start. There’s no guaranteed spots. It’s up to me to get the job done.”

Hall has also been to two USC home games so far this season, taking in Trojans victories over Utah State and Colorado.

“Since it’s right down the street I’ve already checked out a couple games with my teammates,” Hall said. “I just watch the offense and the receivers. I’ve been watching JuJu [Smith-Schuster] a lot, and he’s balling. Just to watch them in person and see how I might fit into the offense, it’s cool.”

While Hall admits that USC’s proximity is a positive, it also isn’t necessarily one of his priorities.

“As any player would like, it’s close to home, so you’re by your family,” Hall said. “But in the end I’m going to go to whichever school has the best situation for me.”

With signing day of 2018 still quite a ways off, that openness in regard to the process is a constant theme in Hall’s recruitment at this stage.

“I’m going to take all five of my visits,” Hall said. “I just really want to take my time with this whole process. I want to talk it over with my family and just make sure I make the right decision.”

Hall hasn’t decided on any destinations when it comes to those official visits. He does, however, hope to make it to some more Trojans games this season, as well a UCLA home game at some point soon, although no concrete plans are set for either at this point in time.