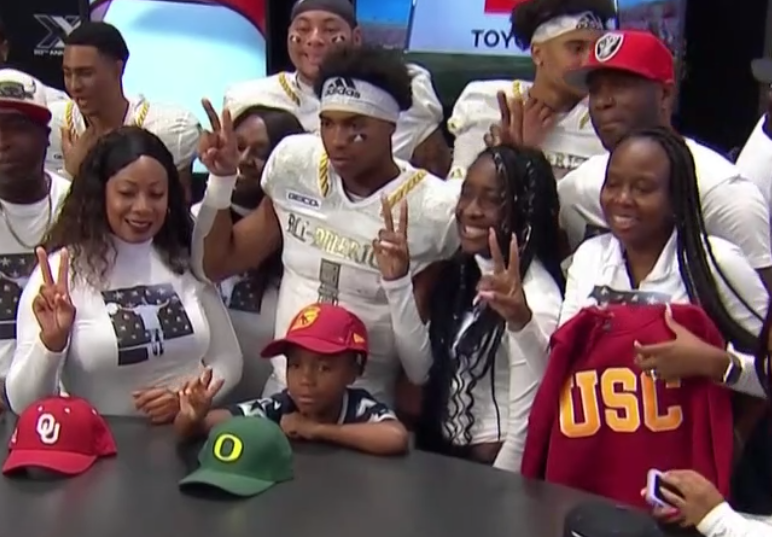 USC is finally on the board with an elite in-state recruit, as wide receiver Gary Bryant Jr. announced his commitment to the Trojans during Saturday’s All-American Bowl.

Bryant (Corona, Calif./Centennial) is a true game-breaker as a wide receiver. The 5-foot-10, 165-pound speedster caught 58 passes for 1,134 yards and 10 touchdowns during his senior season. He also added two runs for 138 yards and two touchdowns. Bryant brings dynamic speed to the USC offense and should fit nicely as a slot receiver, capable of playing as a true freshman or eventually stepping up in 2021 if Amon-Ra St. Brown leaves early for the NFL.

Bryant performed well in the All-American Bowl, grabbing a 43-yard touchdown pass on a deep ball from Alabama signee Bryce Young. He also had a 23-yard punt return wiped out due to a block in the back penalty.

Bryant joins Joshua Jackson (Harbor City, Calif./Narbonne) as the wide receivers committed to the Trojans in this class. Right now, they are the only two non-linemen, non-kickers in USC’s 2020 class. And they join a tremendously talented wide receiver room. While Michael Pittman and his 101 receptions for 1,275 yards and 11 touchdowns in 2019 (all team-highs) is off to the NFL, the Trojans are scheduled to return experienced players in St. Brown (77 catches, 1,042 yards, 6 touchdowns in 2019), Tyler Vaughns (74, 912, 6) and Drake London (39, 567, 5), as well as several talented true freshmen who didn’t see much action due to injury — including Munir McClain, Kyle Ford and Bru McCoy. John Jackson III also stands to see an increased role as a sophomore in 2020.

Bryant represents a big addition to this class, as USC had been shut out among the top-25 prospects in California. The Trojans are finally on the board there, as Bryant is the No.7 prospect in the state and the No. 57 prospect nationally.

USC began the day ranked No. 79 in the nation with its 2020 recruiting class. Bryant’s commitment moves the Trojans up to No. 56. Bryant has already signed with USC, which means the Trojans were able to comment on his announcement.