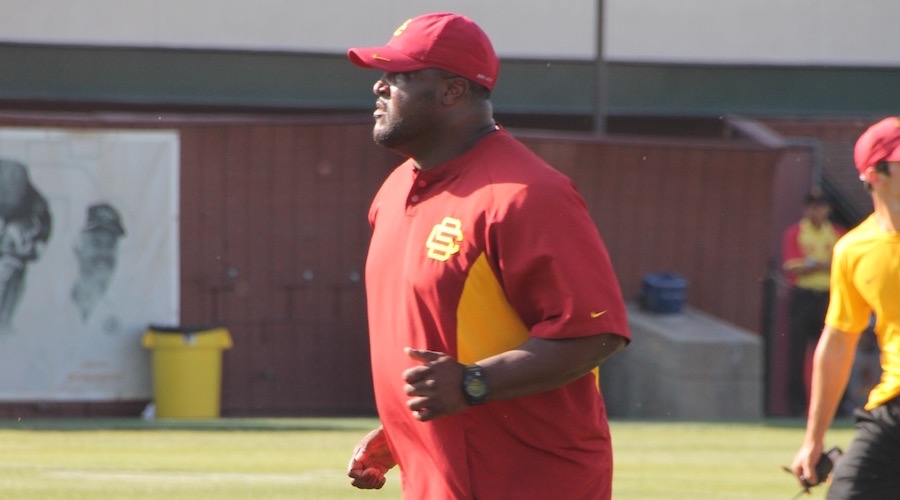 There was a lot of scuttlebutt recently when Lane Kiffin made an offer of a Florida Atlantic scholarship to 13-year old Kaden Martin, the son of USC offensive coordinator/wide receiver coach Tee Martin

One of the questions that circulated was the fact of Kiffin even being at Florida Atlantic by the time Kaden is ready to choose a college, but another question that also pops up is wondering if Tee will be at USC at that time. It’s a valid question that is rooted in the fact that Tee is getting closer and closer to being a candidate for some pretty good head coaching jobs and it’s easy to imagine that someone is going to snap him up at some point.

Martin is starting his sixth year at USC, originally hired as WR coach by Kiffin, and his resume of production speaks for itself. Under his watch we’ve seen Robert Woods, Marqise Lee, Nelson Agholor and JuJu Smith-Schuster put up huge numbers and left USC as a first-round pick and three 2nd-selections. If you’re talking about development of players to move them on to the NFL, it is certainly being done at the wide receiver position for the Trojans.

It’s not just the big-name players either. Sure, guys like Woods and the others came to USC with all the skills to succeed so it makes sense to see them have those results, but how about a guy like Deontay Burnett? A one-time blueshirt who developed to the point of being a Rose Bowl star? Or De’Quan Hampton being ready to step up against UCLA when his number was called? Or Darreus Rogers seeing his game come together as a senior, including a catch against Colorado that was as important as any play of the 2016 season?

Along the way Martin has earned a reputation not only as a teacher of fundamentals with a great attention to detail but also as an elite recruiter, originally with his out-of-state efforts and then focused more locally with prime target schools. In 2015 he was named as one of the top 10 recruiters in the nation and Pac-12 Recruiter of the Year, and it didn’t surprise anybody who follows recruiting to see his name on those lists.

And then there was the 2016 season. It was the first opportunity as an offensive coordinator for Tee and it came under a first-time head coach in Clay Helton. Martin had turned down the chance to return to Tennessee as an OC the year before when Butch Jones was hired as the Volunteers, and I’m still somewhat surprised that he turned the job down. Don’t get me wrong, I understood why he stayed at USC but I thought there was a real chance he would get swayed by the opportunity to go back to a place where he won a national title as a quarterback.

Instead, he stayed at USC and things couldn’t have gotten off to more of a shaky start with his offense through the first three games. With questions swirling around the program and the head coach, a quarterback change was made and in the first start for Sam Darnold the issues continued, at least through the first few series with turnovers. Martin put in a call to the sidelines in that Utah game to check with some of the veteran players on how Darnold was handling the adversity, he was told “don’t worry about him coach, Sam is fine, he’s a stud”.

As it turned out, Darnold definitely was a stud with the way he transformed the USC offense (and the way Martin was perceived as a coordinator and play caller) and as the wins grew and the offensive production mounted Martin was there to share the coaching credit along with the Helton brothers, Clay and Tyson (QB coach, passing game coordinator).

With Darnold at the controls again in 2017 the Trojan offense is expected to be prolific, and ironically it will be the production of Martin’s young receivers that will go a long way in determining how successful they will be. Clay Helton even went so far as to say in spring that the offense will go as far as the young receivers go. I don’t know if that is entirely true, the offensive line will need to come together and there are still plenty of other elite skill players for Darnold to rely on, but Helton’s point certainly makes sense when you consider the need to replace the production from Smith-Schuster and Rogers.

Assuming all that happens and 2017 is another good offensive year, does Martin get a shot at a head job at the end of this year? I wouldn’t rule it out. There are plenty of opening these days that are filled with coaches who don’t have the solid resume at a high level, even if it would include only two years as a coordinator. You would have to be projecting a little bit but I would have no problem betting on Martin with his history of achievement at most every point in his life.

In the meantime, I’m going to sit back and enjoy what is possible for the offense this year. If things go well and there are chances for Tee and others to reap the rewards of that success, so be it, and we will cross that bridge if it comes.