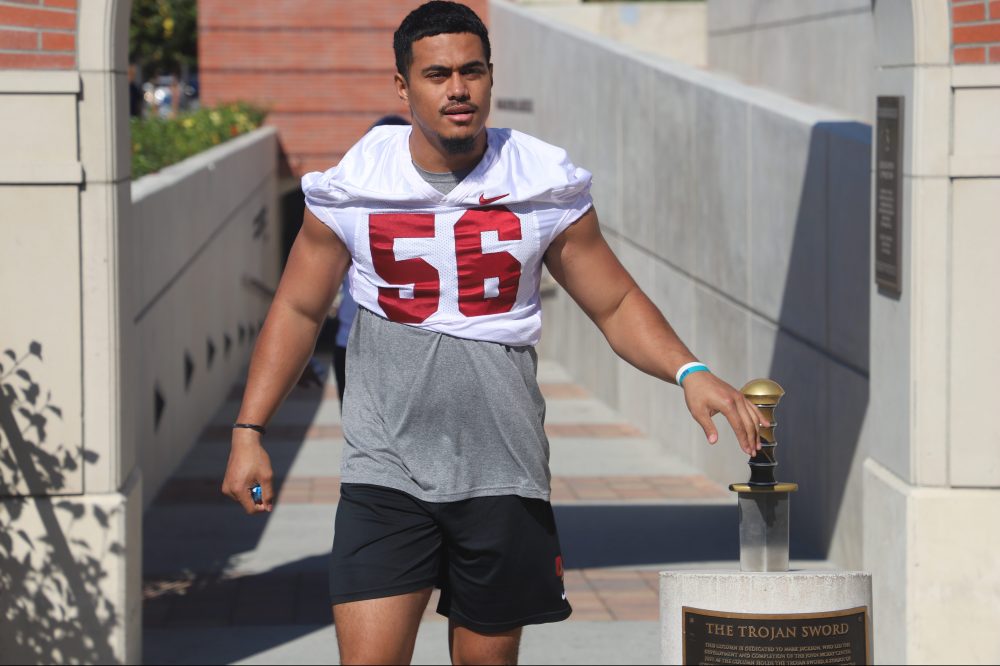 The only mention of zoom this spring was supposed to be in reference to the speed at which the defense was flying around the field under new coordinator Todd Orlando. Now, due to measures designed to slow and stop the spread of Covid-19, that word, and just about everything else, has taken on new meaning.

Now, Zoom video conferencing is one of the only things connecting players and coaches during a time where no organized team activities can take place through at least May 31. That completely wipes out any on-field spring experience this defense was going to get with Orlando and puts pressure on each individual player to prepare themselves as best they can for whenever the restrictions are lifted and the team can come back together. Whether that happens this summer, later in the fall, or not at all, still remains to be seen. But players are doing what they can to acclimatize to their new normal.

That includes senior linebacker Jordan Iosefa, who is one of several players that was already facing an interesting spring, as he continues to recover from two surgeries he underwent last season following a knee injury suffered before the season.

Iosefa is off campus, like the rest of the team, but did not return all the way home to Hawaii. Instead, he is staying with some extended family during this quarantine. A few weeks after USC spring ball was technically postponed, Iosefa was able to look back at how it played out.

The redshirt senior said the first big piece of news that hit him and the team was when UCLA officially backed away from practice, but USC was still running things as normal for the time being.

“Oh my goodness, what’s going on right now?” Iosefa remembers wondering at the time. “It was kind of chaotic.”

Ultimately, USC announced shortly after that the Trojans would also indefinitely postpone spring ball and it was clear early on that this would not likely be a short postponement.

Iosefa said the initial reaction from him and his teammates was concern that they would be losing time from learning the new defense and getting in the necessary on-field reps that spring ball would provide. Quickly after that, it shifted to questioning how everybody would handle everything that needed to be done.

Last spring, offensive coordinator Graham Harrell had an opportunity to install his offense and the one thing he repeated over and over was that there is no substitution for reps. The more reps a player took in the offense, the more efficient the offense would be. Certainly, a lack of on-field reps is going to slow the implementation of this defense. But everybody involved is doing everything they can to mitigate the damage this break could cause.

“It really started prior to spring ball,” USC head coach Clay Helton said two weeks ago on Trojans Live. “We invested four weeks prior to spring ball, two hours a week, of being able to do installation meetings as well as walkthroughs. So we really got a little bit of a head start walking into that Practice 1.”

Iosefa concurred, saying he and the rest of the defense felt ahead of schedule walking into that first practice of spring ball.

“From what they had up for us, we learned it all,” Iosefa said. “I’m sure Coach Orlando has more plays, but at that time before spring ball started, we were able to grasp the whole defense and understand the defense he already had installed.”

Iosefa said spring ball was going to be about relearning what they’d already gone over prior to the start of practices. It’s slightly similar to what Harrell did with his offense last spring, when install took three practices and then every practice after that was repeating some part of what they’d already learned.

“We went though what Day 1 of spring ball was going to be back in February,” Iosefa said. “Then for spring ball, we restarted again. And that’s what we’re doing now.”

The players get to spend two hours per week with coaches–the ball should be back in the Pac-12’s court with that ruling, however, considering the SEC is now allowing their coaches and players to spend four hours per week in a virtual setting–and the team is continuing to work install in that virtual classroom.

That hasn’t changed much for Iosefa, who wasn’t going to be out on the field this spring anyway, but it does stunt his ability as a veteran with plenty of experience, to perform as a player/coach.

“It’s hard,” he said. “All I can do is try to hold people accountable with our meetings and check-ins with coaches. I’ll remind guys that we have a meeting and let’s be on top of it.”

Iosefa said it starts with making sure guys are up early and being as productive as possible throughout the day. Again, as a senior who has been through plenty during his time at USC, Iosefa said he fell into a schedule pretty quickly.

“I knew exactly what I needed to do,” he said. “I’m comfortable here being with family, working out, going to class. Some people don’t know how to operate, but for me, I handled it well.”

Iosefa can continue with his rehab away from the field–he has a place set up where he can go every day to do rehab–but being away from the team is a different kind of struggle.

Not being able to see what kinds of drills will be run and exactly what the coaches are looking for in each rep is delaying the clock a bit in terms of being able to execute everything exactly right. And the difference between hearing about how to run or install something and seeing it unfold in live action and real time is huge.

The hope for Iosefa now is that everybody is being as diligent in their preparation for this upcoming season as he is.

“These past eight weeks we were grinding, grinding, grinding,” he said. “Hopefully people don’t go into break mode now. We can’t take two steps back when we’ve taken four steps forward. We have to be doing everything right, assessing the importance of maintaining our body, weight, strength, speed and conditioning, so when we do come back, we’re ready.”

Orlando’s intensity and fiery nature is evident every time he talks, and was clear to see during that one and only day of spring ball. And while it’s tough to carry that emotion through these settings, Iosefa said he and the other defensive coaches had more than enough time to imprint on the defense specifically, as well as the entire team.

“Coach Orlando’s first day on the job, he brought that intensity and energy to our meetings,” Iosefa said. “He immediately left an impact on all of us. He says, ‘Culture beats scheme every day of the week,’ and he’s already left a bit impact on me in how he lives his life and how he reflects on the whole defensive room. I think he’s changed the whole defensive culture already and we’re trying to mimic what he does and be just as hard-working as he is.”

So as the players work largely on their own to keep themselves motivated and moving forward in their understanding of the playbook as well as strength and conditioning–head strength and conditioning coach Aaron Ausmus has detailed plans for the entire program–Iosefa said one thing specifically has been truly eye-opening and downright weird during this whole situation.

“The free time,” Iosefa said. “I think it’s insane. Football players always talk about how they wish they had more time and they wish they had breaks and stuff, time to sleep in. It’s definitely a weird, weird time. We live in such a routined life. It’s also chaotic, but without that form of routine, it’s weird. We have so much time on our hands, we don’t know how to use it.”

Iosefa said with a scheduled wake-up time, then a combination of meals, classes, snacks, weight room, meetings and other activities, there is virtually no time that student-athletes need to schedule on their own.

“Now that we’re stuck at home, trying to figure out what to do is weird,” he said. “Especially this time of year when spring ball is killing you. That’s the hardest time in football.”

Once everything gets back to normal, Iosefa said his hope is that players have a firm grasp of the playbook and are in shape. But ultimately, he’s just looking forward to getting back on the field, and back to that hectic schedule.

“I want to get back into that routine of football,” he said. “I want to be thrown back into classes, eat breakfast, eat dinner, have access to more things, have access to toilet paper. After that, it’s just run and hit. If we can do that, I think we’ll be okay.”