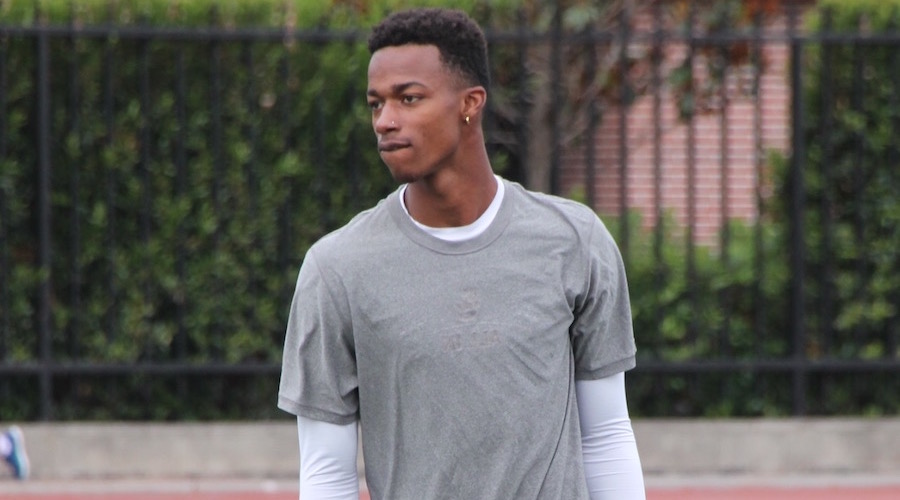 Here’s an update on how the freshmen and newcomers looked this summer during player-run-practices for the Trojans:

QB Matt Fink: Threw the ball this summer better than expected but is still very raw in his development.

WR Tyler Vaughns: Long arms, lanky, and goes up to get the ball in traffic. Tyler (photo above) has a real smoothness to his game.

WR Josh Imatorbhebhe: Josh is the physical contrast to Vaughn’s smoothness, and he combines that powerful frame with some unique athleticism.

WR Michael Pittman: The long strider. Another talented “big” freshman receiver, Pittman is as good as any of them at getting downfield and making plays. I’m really impressed with this trio and what they represent for the future of the position.

WR Trevon Sidney: Trevon is the slot receiver of the group and he’s really come in on recent sessions with some explosive plays. Very shifty.

WR Velus Jones: We didn’t see as much of Jones this summer as the other receivers but his game offers a lot of similarities to Sidney with his quickness.

TE Cary Angeline: Big frame. That’s the first thing that stands out about Cary, and he looks pretty athletic. Would sure be nice to redshirt him.

OL E.J. Price: He stands out among the incoming offensive linemen for his size, this is a big boy. He took a few reps as the #2 LT, and he could eventually battle Roy Hemsley for that role.

OL Nathan Smith: Continues to work at RT, needs to spend a year in the weight room and we will check back in with him next spring.

OL Frank Martin: A high school tackle, Martin was at guard during summer drills, and I think that’s where he ends up.

DT Liam Jimmons: You’ve got to hand it to Jimmons, he bulked up quickly from a high school DE to a serviceable interior depth player. Hopefully he can redshirt now that there are a few more bodies around.

DT Josh Fatu: We didn’t see much from Josh but he has the size to offer depth along the interior and that’s what we need.

DT Stevie Tu’ikolovatu: Like Fatu, Stevie is not a tall guy for an interior lineman but he does bring bulk, as well as experienced production in the conference.

OLB Connor Murphy: Helton talked at media day about Murphy being a freshman who could contribute on DL this year. He didn’t show a ton in summer sessions but he offers a big wingspan frame and in time he should be dominant.

OLB Jordan Iosefa: Probably the biggest surprise among the first-year players with his speed coming off the edge. He will probably compete with Betiku for a reserve role this year behind Nwosu.

OLB Oluwole Betiku: We haven’t seen Oluwole do anything this summer due to injury, he is no longer wearing a boot on his foot (that is good news) but he’s yet to take part in any of the throwing session workouts.

CB Jackie Jones: Jackie showed a lot of ability to make plays and it would be a surprise if he isn’t in the corner rotation from day one. He’s not the biggest guy but he has tremendous instincts for the position.

CB Keyshawn “Pie” Young: Pie had his best session so far last Friday when he made multiple pass break-ups and was very active. Sure looks like a good athlete.

S C.J. Pollard: It’s not a surprise to see Pollard already being very vocal on the field, such a smart player. Should be a redshirt with good safety depth.

S Jamel Cook: We haven’t seen Cook on the field yet, he also had his foot in a boot earlier in summer but isn’t wearing it now. As far as the eyeball test he’s one of the bigger freshman safeties you will find.