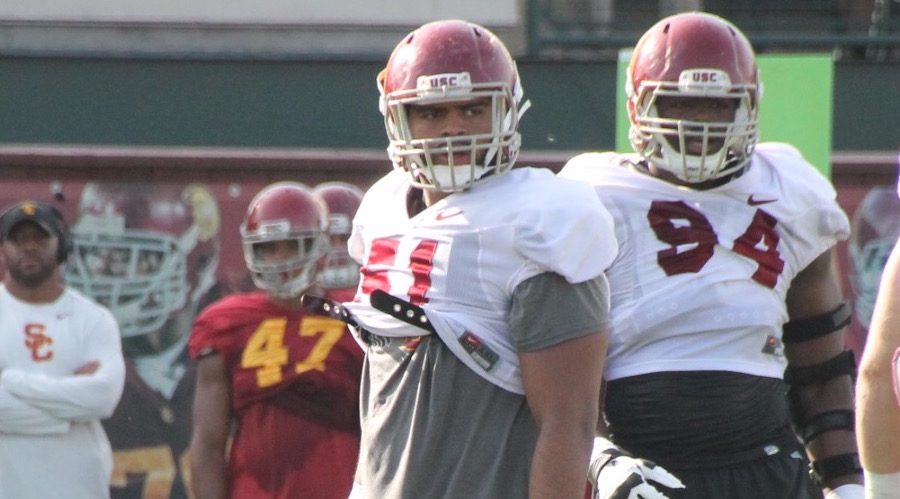 A look at five major storylines to keep an eye on this Saturday when the Trojans take the field for the team’s spring game finale.

With a number of offensive linemen currently sidelined due to injury, Trojans fans will undoubtedly see plenty of new and unfamiliar faces lining up with the No. 1 and No. 2 units. So low is Neil Callaway’s group in numbers, in fact, that USC head coach Clay Helton brought up the lack of depth there as a major reason why the team can’t be run through a traditional simulated game this weekend.

The list of players currently out includes such key cogs as returning starters Toa Lobendahn (knee) and Viane Talamaivao (bicep), as well as promising young players like Nathan Smith (knee) and Andrew Vorhees (back). As such, the most common No. 1 group spotted in recent days has featured Chuma Edoga at left tackle, Roy Hemsley at left guard, Nico Falah at center, Jordan Austin at right guard and Chris Brown at right tackle. With Edoga battling wrist and finger injuries, however, Clayton Johnston has also seen quite a bit of time with the No. 1 unit at both left and right tackle as of late, so it wouldn’t be a surprise to see him in there early and often on Saturday. Also expect Cole Smith – who spent the majority of the spring running with the first team offense at center before Falah returned from his back injury – to take a number of reps with the ones.

With so many missing and moving parts, this unit has understandably struggled at times, so it will be interesting to see if they can close the spring out with a strong performance.

Heading into the spring arguably no position group was surrounded by more question marks than the wide receiver corps, which lost not only starters JuJu Smith-Schuster and Darreus Rogers from last season’s squad, but also important reserve players De’Quan Hampton and Isaac Whitney.

As expected, the one returning star of the unit, Deontay Burnett, has picked right up where he left off in the Rose Bowl, standing out on a consistent basis. Veteran QB-turned-receiver Jalen Greene has performed solidly as well.

More significantly, however, has been the emergence of some younger receivers who have made the most of their increased opportunities in practice. Josh Imatorbhebhe, Velus Jones, Michael Pittman Jr. and Tyler Vaughns have all shown that they just might be ready to step in and contribute. Pittman and Vaughns, in particular, have really made a move as of late, as they’ve seemingly taken turns one-upping each other with highlight-reel grab after highlight-reel grab.

All of a sudden rather than being a question mark, it’s starting to look like this could be a position of real strength.

With virtually every publication and Las Vegas line having dubbed him as the Heisman favorite heading into next season, the focus of everyone in attendance is sure to be zeroed in on Darnold. And to his credit, the San Clemente product has lived up to the hype so far this spring, even with all of the mixing and matching along the offensive line, as well as those young receivers. Putting his trademark rocket for an arm, poise in the pocket and unique playmaking ability on full display, he’s been impressive to say the least.

More of a surprise has been the play of redshirt-freshman Matt Fink. Showing improvement in virtually every aspect of his game, he appears to be solidly in the No. 2 spot ahead of early-entrant freshman Jack Sears.

Defense taking off in Year 2 under Pendergast

While the offense has come on in recent days, the defense has really dominated the sessions throughout much of the spring. Now in the second year of Clancy Pendergast’s system, the entire unit appears to have reached a new comfort level, showcasing an extremely aggressive brand of play during each and every practice.

Not only have established veterans like Cameron Smith, Uchenna Nwosu, Chris Hawkins, Marvell Tell and Iman Marshall shined, but so too have younger players like Jack Jones, John Houston Jr., Jamel Cook and Marlon Tuipulotu. It’s also been encouraging to see the development of experienced upper-classmen like Smith and Hawkins into team leaders.

Defensive line with improved depth, and an emerging youngster

One big reason for the outstanding play of the defense has been the front seven, and specifically the interior defensive line unit. A group that appears to be blossoming under the tutelage of Kenechi Udeze, it’s a unit that also showcases improved depth thanks to the return of Kenny Bigelow – who is looking good in limited action as he works his way back from knee surgery – and even more notably, Marlon Tuipulotu. Neither looking nor playing like the early-entrant freshman that he is, the 6-foot-3, 295-pounder out of Independence, Oregon has been nothing short of stellar. He’s been splitting time with Josh Fatu at the nose tackle position with the No. 1 group, and he appears to have what it takes to make a real run at the starting job.

Of course, nobody has been more impressive here than defensive tackle Rasheem Green. Having added some bulk to his frame, he looks poised to have an absolute monster year. Throw in other potential contributors such as Christian Rector, Malik Dorton, Liam Jimmons and Jacob Daniel, not to mention highly regarded signees Jay Tufele, Jacob Lichtenstein and Brandon Pili – all three of whom will arrive this summer – and there is reason to believe that this could wind up being the top interior group to line up at USC in quite some time.