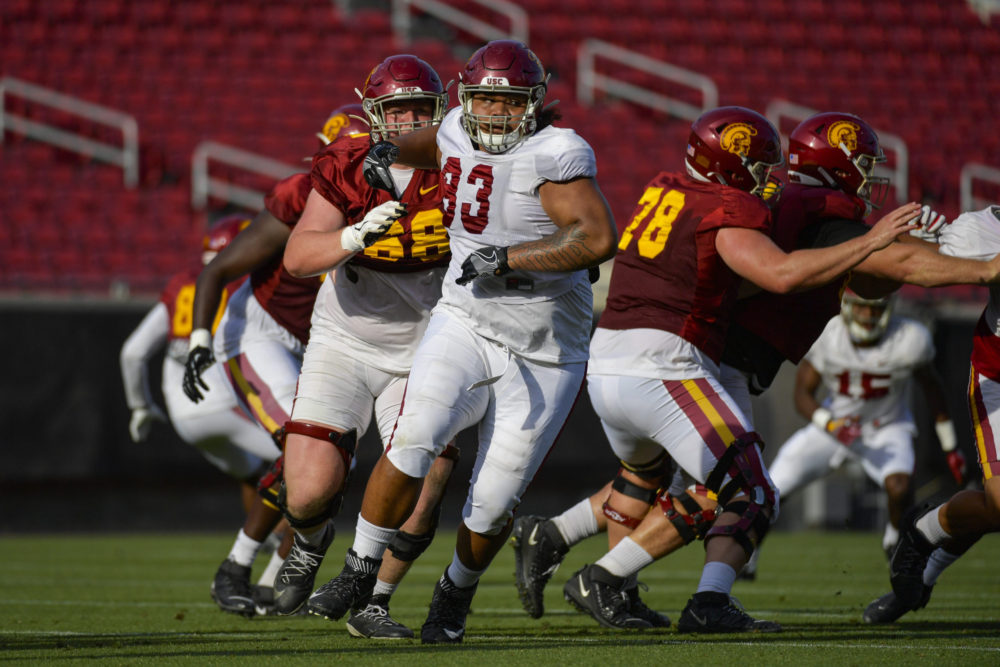 USC’s spring game kicks off at 1 pm Saturday afternoon, and the Trojans are making this a real scrimmage for the first time in several years. It was announced this week that 5,000 guests will be in attendance and the Spring Showcase will be televised on the Pac-12 Network.

Heading into Saturday’s game, here is a sampling of five of the many things to watch based on themes that have developed this spring.

If USC keeps the first team offensive line together on the same team Saturday, it’ll be worth watching how they perform in this setting. Left tackle Courtland Ford is the new guy up front and he has big shoes to fill in replacing Alijah Vera-Tucker at left tackle. There has been little in the way of a consistent running game this spring, so this group could make a fairly big statement on Saturday. USC has had no rotation going in terms of that first group, with Ford, Andrew Vorhees, Brett Neilon, Liam Jimmons and Jalen McKenzie taking every snap with the first team.

You could get pretty far into setting a talented lineup by using just the new faces out on the field this spring. The biggest impact might be made by running back Keaontay Ingram, who brings a nice combination of speed and power with him between the tackles and out as a receiver. Wide receiver K.D. Nixon is also likely to get his hand on a few passes on Saturday. But they aren’t the only new guys making impacts at those spots, as true freshman wide receiver Michael Jackson III and true freshman running back Brandon Campbell have been as good as anybody at those respective positions at times this spring. Both are likely to figure into the mix on Saturday.

Defensively, the middle of one of the defensive lines could be manned by true freshman Jay Toia and he has made a big impression early on. There is a lot to like about the way he plays the game and the physical presence he brings to the line of scrimmage.

The defensive backfield will have plenty to watch here as well. Safety Xavion Alford is running with the first team, while true freshmen safeties Calen Bullock, Xamarion Gordon and Anthony Beavers have each taken some second-team reps.

And let’s not forget the true freshmen quarterbacks in Jaxson Dart and Miller Moss. They’ll have plenty to play for on Saturday as each looks to take that frontrunner spot when it comes to backing up Kedon Slovis this season.

The defensive backs aren’t just getting their hands on a lot of passes this spring. They’re coming down with interceptions. Obviously in spring ball, any positive for one side of the ball is a negative for the other. Whether it makes you cheer or fret, interceptions have been a theme in some practices and the defensive will be looking for more on Saturday.

Cornerback Jayden Williams picked off passes in back-to-back practices between last Saturday and this past Tuesday. Bullock grabbed two interceptions by himself on Tuesday. And Chris Steele finished Tuesday’s practice with an interception in the endzone to close out a goal line drill. We’ve also seen cornerback Joshua Jackson Jr. make a very acrobatic interception deep down the field early in spring.

A number of defensive linemen and outside linebackers appear to be playing at a high level right now. Drake Jackson and Hunter Echols have been unblockable at times this spring, and Tuli Tuipulotu has clearly taken his game to another level after an impressive true freshman season. The offensive line needs to raise its game this season and it’s getting a big test from this group up front. The quarterbacks will be off limits for contact on Saturday, so sack numbers might be up for debate, but the defensive line’s performance could be a talking point coming out of the scrimmage.

The USC coaches went into the spring talking about establishing culture and wanting to have a physical camp. That has been the case. The coaches have found a way to inject intensity and competitiveness into everything they’ve done, dating back to the winter conditioning drills. Where we’ve seen these spring showcases devolve into two-hand touch finishes and glorified practices in the past, this one seems to be designed to ramp up the competitiveness and really let the two teams go at it. If things continue in that regard from what we’ve been able to witness this spring, it should be a welcome sight for USC fans.