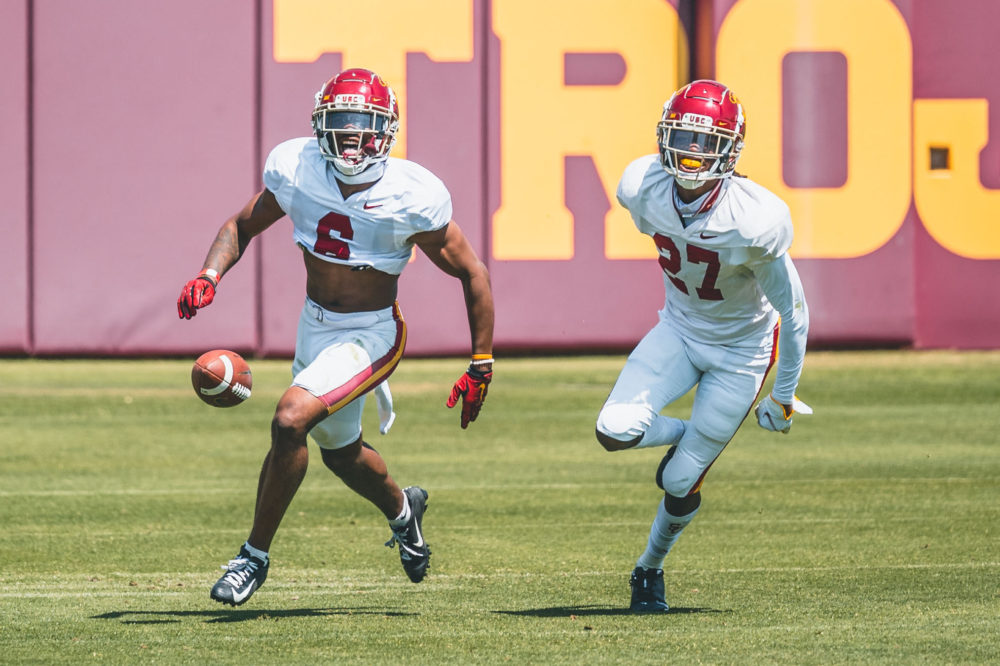 Heading into Saturday’s afternoon practice, USC has conducted five of its 15 scheduled spring ball practice sessions. One-third of the way through spring, with plenty left and a lot still to be revealed about this team, here are five positives that have stood out.

His position switch was the most notable when USC’s spring roster was released and it took all of one practice to see that he absolutely has what it takes to play cornerback at this level. Jackson likely would have done just fine for himself had he stuck at wide receiver, but it looks like he has a chance to be an elite cornerback. The athletic ability is there and was evident from just his one day of spring ball at wide receiver last season. But it’s his mentality at the position that really stands out.

He’s fearless going up against USC’s receivers and what stands out is that he hasn’t noticeably been out of position or caught guessing so far. He’s been in position to make multiple interceptions and his diving grab on a deep ball showed that he feels he can make every play when the ball is thrown.

There are cornerbacks on this roster that he’ll need to beat out with Chris Steele and Isaac Taylor-Stuart returning. Taylor-Stuart has had a very good start to the spring himself, and Jayden Williams is another guy who has raised his game during the early part of spring.

But at this point, it doesn’t look like Jackson is going to go away quietly and he might have a real shot to keep himself in the discussion for playing time this season.

Running back Keaontay Ingram arrived at USC with plenty of experience from his time at Texas, but the Trojans were bringing back two experienced backs of their own in Stephen Carr and Vavae Malepeai.

It’s been Ingram who has stood out so far. His 6-foot-2, 220-pound frame and physical running style combines with soft hands and unexpected fluidity in evading tacklers. He’s been the guy who has punished defenders during the early part of spring and it won’t be a surprise if he’s the starter against San Jose State this fall.

Having said that, Carr and Malepeai have shown up this spring as well, though the run game hasn’t exactly clicked during the two padded practices that media has been allowed to watch. There also exists the possibility that the newness of Ingram will elevate him with onlookers, since Carr and Malepeai are such known commodities at this point in their careers. But there’s something a little different about Ingram and it will be interesting to see if he keeps this level of play up through the entire spring.

It would be easy to pick out wide receiver Michael Jackson III from this group and shine a bit of a spotlight on him. He’s been terrific and looks like a veteran at times. But the entire early enroll freshman class deserves praise for how they’ve showed up this spring, especially since many of them did not have a senior football season and are jumping into this after not playing an organized game in well over a year.

Running back Brandon Campbell is similar to Jackson in that he’s already built like an upperclassman and bring some surprising quickness to go with that frame.

Tight end Lake McRee wasn’t a huge name in this recruiting class, but he’s fit in nicely with that group and has run some plays with the first team. He’s another big body who can run and catch, and has already shown to be a willing blocker.

Defensive lineman Jay Toia’s game immediately jumped a few notches when the pads came on. He’s so big and physical already that it’s really exciting to think about where he could get to in a few years under position coach Vic So’oto.

The back seven defenders, including linebacker Julien Simon and defensive backs Anthony Beavers Jr., Xamarion Gordon and Calen Bullock, aren’t pushing the starters yet, but it’s pretty clear that they all have a shot to be major contributors on that side of the ball during their USC careers. It wouldn’t be surprising to see any or all of them carve out time on special teams this season.

The quarterbacks haven’t lit things up early on, but there are absolutely no worries with how they’ve performed. Both Jaxson Dart and Miller Moss have improved each practice and there are no signs that either isn’t capable of taking over for Kedon Slovis. The question will be if they can get ready to potentially play this season. Now that their feet are wet, watching these two raise their games and push each other will be a key to the second half of spring ball, considering head coach Clay Helton said they’d be taking long look at the younger players over the final six practices.

USC coaches were clear from before practices started that this would be a physical camp. Helton said the Trojans would use every bit of allowable time in full pads and tackling and the defensive coaches spoke at length about establishing culture through physical play. Those haven’t been empty words through the early part of spring. The Trojans have started the last two open practices with the Oklahoma drill pitting linemen heads up against each other and skill players heads up against each other, with a running back looking to traverse the alley behind the two blocks. It’s one thing to do the drill on the first day of full contact to hopefully set the tone for the rest of the spring. It’s another thing to do it as the first drill every practice. It happened last Saturday and Tuesday, and we’ll see if that continues moving forward.

USC has also tackled to the ground during run drills and the team period of practice. At this point, it would be surprising to see that let up. The defensive coaches have been clear that they can’t get a good read on their players unless it’s live action and all of this feels like it’s the mentality this program wants to bring to the season.

Slovis might not be picking apart the USC defense with regularity the way a returning two-year starter and potential Heisman Trophy candidate might be expected to. But there also haven’t been any throws that have come out of his hand where a double take is needed to figure out which receiver, or even which team, it was intended for, which happened with concerning regularity last season.

The ball is coming out smoothly and he seems to be increasingly looking to drive it down the field. It’s often difficult to get a true read on things when the offense might be working on specific looks or checks or strategy and the offense isn’t fully opened up.

Seeing Slovis through five practices, any concern about the arm from last season is just about completely removed and that’s a huge box checked for spring ball.