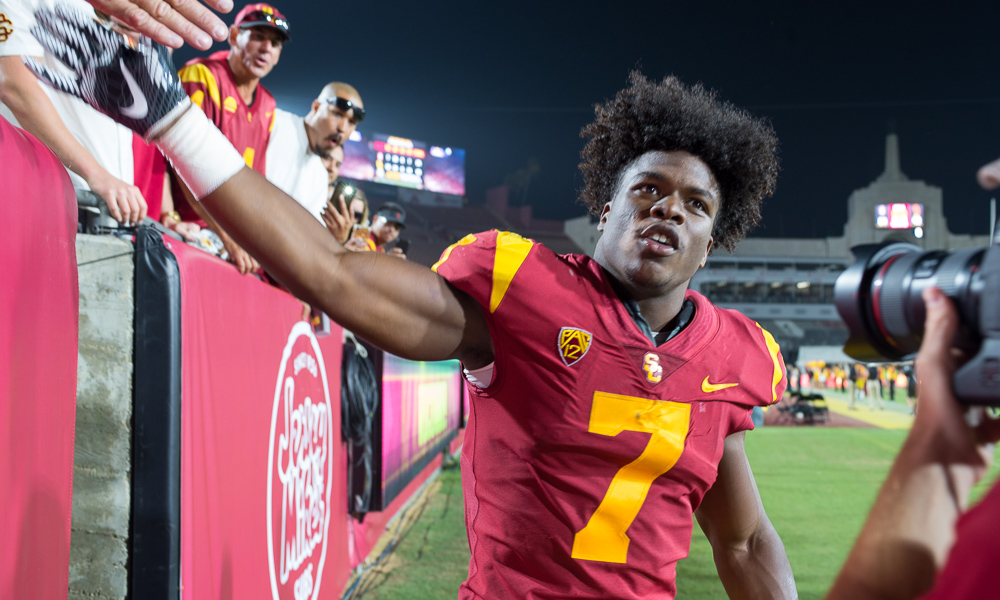 Here’s an update on the first-year players for the Trojans, how they have performed this fall and the outlook for spring ball.

QB Jack Sears: Was able to redshirt and served primarily as the service team quarterback. Jack was a steady presence and occasionally showed his abilities when he was placed in team situations, namely a solid arm and good running skills. As far as the spring, his role will largely depend on if Sam comes back. If that happens, Jack is likely to spend the next year in a reserve role while looking to compete for the open job in 2019. If Sam doesn’t come back, Jack will be in the thick of a QB competition with Matt Fink, with JT Daniels arriving in the fall.

RB Stephen Carr: It was an impressive freshman season for Carr with flashes of dynamic play both as a runner and pass catcher. A mid-season foot injury caused him to miss several games but he showed enough for Trojan fans to know the potential is there for something special. If RoJo declares for the draft, a move that is widely anticipated, then Carr is the likely favorite in spring to earn the starting job in his place.

WR Joseph Lewis: Joseph played right away so there was no thought of a redshirt year but his impact was limited (4 catches, 2 tackles). All the attributes seem to be there for a former #1-ranked receiver in the nation but his main issue for spring and moving forward is going to be the depth chart as his position group appears ready to return in tact.

WR Randal Grimes: One of the most surprising decisions of the year was burning the redshirt for Grimes in the middle of the season. There were plenty of other options at receiver and there just didn’t seem to be a pressing need to play him but he did play, and contributed two catches before a hand injury sidelined him for the rest of the year. The good news is that Randal showed some good development and it will be real interesting to see how he fits among the deep receiver group.

TE Josh Falo: Not only did Josh play this year as a true freshman but it spoke volumes that the Trojans went to him on the final fourth-down play to put away the conference championship game. He offers such a long target and the ability to get downfield, I can’t wait to see how his game advances in spring as he continues to add bulk.

TE Erik Krommenhoek: The Trojans played both true freshmen tight ends this year due to Daniel Imatorbhebhe injury and Cary Angeline leaving the program, and while Kroomenhoek didn’t have the impact that Falo did it was still a solid first year. Erik is going to be a pretty powerful blocking option and he also showed some pass catching skills as well. He will be part of a deep group in spring.

OT Austin Jackson: This is what a college tackle looks like, and Jackson was able to get some good experience this year at both tackle spots due to injuries. It would not be a surprise at all to see Toa Lobendahn (the starter at LT this year) move inside which would allow Jackson to enter spring as the presumptive starter. Austin also showed his athleticism with a blocked field goal attempt.

OG: Andrew Vorhees: Andrew was thrust into the starting line-up early on after the season-ending injury to Viane Talamaivao, and he responded well. A very strong young man who his teammates say is very coachable, Vorhees should be the foundation of the line moving forward.

C Bret Neilon: Another in a line of solid centers right now on the Trojan roster. Neilon is a tough, strong player who is as good as advertised, and he’ll get his shot in spring to show where he will fit in the rotation. He redshirted this year.

OG Alijah Vera-Tucker: Alijah was injured early in the season and was able to redshirt. He lined up primarily on service team at left guard and will likely battle Roy Hemsley in spring for the top reserve spot behind Chris Brown.

OT Jalen McKenzie: Jalen arrived as a blueshirt in fall camp and saw practice time at both guard and tackle. He also lost weight from his high school frame and was moving well. There’s a lot of physical potential here.

DL Marlon Tuipulotu: It didn’t take Marlon long to show that he was physically and mentally ready to contribute right away, and he did with a pair of tackles in three games, but a back injury that required surgery sidelined him for the remainder of the year. It’s unclear if he will be available for spring but barring any kind of setback he will be part of the nose tackle rotation next fall.

DL Brandon Pili: Brandon was headed for a redshirt year but midway through the season the Trojans had lost Marlon Tuipulotu and Josh Fatu to injury while Kenny Bigelow quit the team so Brandon was forced to play, and he was sure a lot of fun to watch the rest of the year. Just an athletic big man (12 tackles) who moves so well with a lot of energy, and he ended up being named honorable mention all-conference.

DL Jay Tufele: There was a time late in the season when the d-line depth was dwindling that Helton talked openly about the possibility of burning the redshirt year for Tufele. It didn’t happen but it shows that Jay was basically next in line in terms of his development. He has been lining up primarily in the DE spot behind Rasheem Green, so his role next spring will be determined in large part by Green’s possible departure to NFL.

DL Jacob Lichtenstein: The biggest thing we’re starting to see for Jacob is that he’s beginning to fill out, he was a pretty thin frame when he first showed up so this off-season will be key to see him add more bulk. He’s been playing in the DE spot behind Malik Dorton and Liam Jimmons.

OLB Hunter Echols: Missed the first half of the season due to injury and has been lining up at the DE/OLB spot behind Gustin, and he looks best as a pure pass rusher.

LB Juliano Falaniko: The fact that Falaniko played this year was one of the bigger surprises for the freshman class considering his slight build but he was active on special teams and ended the year with 6 tackles. He lined up for most of the year as a reserve OLB behind Uchenna Nwosu but during bowl practices we also saw him line up at both inside linebacker spots.

LB Levi Jones: I’m still surprised we didn’t see more of Levi in the defensive rotation this year. He played a lot on special teams and ended the year with 15 tackles but with is aggressive playing style it’s only a matter of time before he pushes for more time, and that push will begin in spring at WLB. I also wouldn’t be surprised if he gets a look at an OLB spot.

LB Tayler Katoa: Tayler was competing at WLB last spring when he suffered a knee injury that has kept him out since then, but it’s hopeful that he can return in spring. Tayler has added some good weight since he got here, which usually happens the first year a player gets on campus.

CB Greg Johnson: Greg was opening some eyes both on special teams and cornerback (very physical in his coverage) before a shoulder injury held him out the remainder of the year (he played in four games so will likely not be able to redshirt).

CB Jay Godfrey: The plan was for Jay to redshirt and bring him along slowly as he recovered from a late season knee injury as a HS senior. He did show a couple flashes of athletic play when he was on the field but his first real opportunity will come in spring to see if he is ready to make a case for time in the rotation.

S Isaiah Pola-Mao: Isaiah got an early taste of RoJo’s 2017 power when he needed shoulder surgery after attempting to tackle him during a fall camp scrimmage at the Coliseum. Pola-Mao redshirted and will be able to take part in spring.

S Bubba Bolden: Another guy who was active on special teams, Bubba had 8 total tackles, 7 of them solo. He will also be in the thick of the competition this spring for the starting safety spot vacated by Chris Hawkins.

LS Damon Johnson: Damon held down the long snapper job except for the two games he was injured.

PK Chase McGrath: Chase came in as a walk-on, beat out a scholarship kicker in fall camp and then calmly hit a game-winning kick against Texas in double overtime. Not a bad way to start your Trojan career, especially when the first year ended with a scholarship awarded at the team banquet.