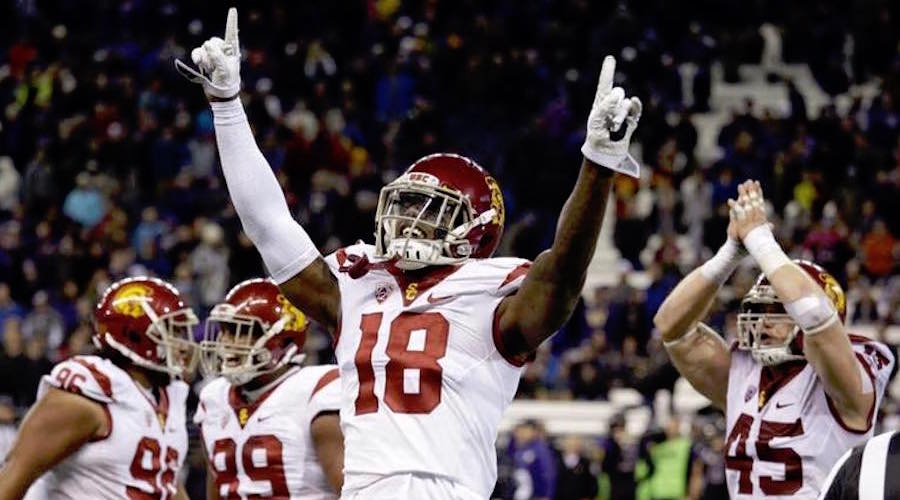 There were two things that happened on Saturday night in Seattle.

The first was that the USC Trojans beat the Washington Huskies 26-13 led by a dominating defensive performance that limited the top-ranked rushing team in the conference to 17 net yards on the ground. The Trojans held the Washington offense well below their usual production levels, including harassing QB Jake Browning all night, and the only time the Huskies reached the end zone was due to a slip by the USC defender.

Things started up front with a USC defensive line that featured Stevie Tu’ikolovatu plugging the middle, a key early TFL from Uchenna Nwosu and a pair of sacks and a PBU from Porter Gustin while Rasheem Green added a sack, two pass break-ups and a blocked field goal. Michael Hutchings was the top tackler for USC on the day, and Adoree’ Jackson came up with a pair of interceptions and a beautiful pass break-up on a deep ball.

On offense, it was Sam Darnold once again who came through with play after play, whether it was converting so many third downs, or the way he drove the team down the field late in the first half for a score, or the touch he showed on the touchdown pass to Daniel Imatorbhebhe. The offensive line gave Sam good protection all night and helped pave the way for a run game that saw Ronald Jones get a career-high with 23 carries.

So yes, there was the practical matter of winning the football game, but that was only one part of what happened here. The second thing that happened was that the USC Trojans (and their head coach) answered some legitimate questions about the 2016 team and where the program is headed, and they answered them in resounding fashion.

Coming into the game there was a lot of talk about it being a statement game, a chance for the Trojans to show that they had moved past the early-season start with a 1-3 record, and that the recent run of good play was more than a by-product of finding the soft spot in the schedule. Think about this perception, the Trojans were on a 5-game win streak and that earned them a spot at #20 in the rankings, that’s a reality check on how the team was viewed by the rest of the country.

There were questions about the ability of USC to match the fundamental and physical style of play of the Huskies, who had risen to #4 in the CFP rankings with a 9-0 record and had a slew of impressive stats to back them up. There were memories of 2015 when the Huskies came into the Coliseum and played the game on the USC side of the line of the scrimmage, and with this year’s contest being played at Husky Stadium there were also questions about how the Trojans would respond in that frenzied atmosphere if adversity hit.

And as much as any of the above, the game was a major opportunity for Clay Helton to make his case that indeed he was the right man to be the head coach of the Trojans while matching wits with a guy who at one time was also considered for the job.

There was just so much at stake in this one game and it’s one of the more satisfying feelings as we sit here afterwards to consider just how well the Trojans responded.

It was important to get out to a good start to not let Washington jump to an early lead and get the crowd going. Nwosu made a play on the opening drive that halted a potential UW drive, but then the Trojans couldn’t take advantage as Sam threw one of his few bad balls on the next possession for a pick. The first real big play for USC was the pick by Adoree’, and that led to a Darnold to Darreus Rogers touchdown pass for a 10-3 USC lead. Perhaps the biggest moment of the first half came when Darnold got the ball at the USC 18 with just over two minutes left. Rather than be conservative and settle for a 10-6 lead, the Trojans pushed it and Sam completed three passes of 21 yards or more on the drive, which ended in a Jones touchdown for a 17-6 halftime lead.

That mindset on the drive, and the ability to execute, is one of the biggest intangibles of this team right now. It starts with Darnold, who was in pure attack mode, and the coaches put him in great position to succeed. The Trojans went 82 yards in 9 plays against one of the top defenses in the country, and Darnold looked in complete command the whole time. Impressive.

At that point in the game there was a lot of confidence on the USC sidelines too. One former Trojan player was seated just behind the USC bench and he said the players were absolutely “dialed in” and were yelling at each other “we got this, we got this”.

But as can happen in college football, things didn’t go completely smooth in the second half and there was a moment when the momentum of the game could have easily turned.

The Trojans were cruising along at 17-6 in the third quarter and the Washington offense wasn’t doing much, but then Adoree’ Jackson slipped while starting his coverage against John Ross and it resulted in a 70-yard Husky score. Bad break but the Trojans were still up 17-13 and that just meant Sam would need to go on a long drive. But on the second play of the next drive, Sam read the blitz and threw to Rogers on a slant, but Rogers slipped and the ball was picked to give Washington possession deep in USC territory. Really? The game is going to turn on a couple slips?

It was one of those adversity moments where the crowd was now into it, and where teams that are ranked #4 can often earn that ranking by taking control of the game. Instead the USC defense rose to the occasion and forced a FG attempt, which was blocked by Green in another example of good special teams this year.

Even the way the Trojans closed the scoring showed the grit and tenacity they are playing with right now. After the blocked kick, the Trojans had driven down the field at the end of the third quarter looking to effectively put the game away with a touchdown, and it looked like that had been accomplished when Darnold dove into the end zone for a score. But a hands-to-the-face penalty on Damien Mama took that off the board, and that meant the potential for a lost opportunity. Not with this team, not with this quarterback. Sam quickly hit Rogers for 17 yards, and then lofted a touch pass to Imatorbhebhe in the back of the end zone and a 24-13 USC cushion. Foot on throat, end of ballgame.

And you can’t sit here and appreciate what happened in the game without giving credit to Helton and the job he has done. That was a well prepared USC team that took the field, they had a game plan, they had focus and they went out and executed in a physical style. All those things are a reflection of the head coach. And let’s be clear, one of the reasons it’s so good to see now is because we didn’t see it earlier in the year, particularly in the season opener. The USC team that showed up against Washington has grown so much since that point (and granted that the Huskies are not Alabama) but just as the team has grown it’s important to recognize that the coach has grown too (use of timeouts).

There’s no question that Helton won the head-to-head battle with Chris Petersen on this night and that’s no small accomplishment. Petersen is widely considered to be one of the best in the business with a big-game resume that commands respect. The fact that Petersen interviewed at one time for the USC job means that in some way Helton will always be measured against him, and on this night he showed that he is up for the task.

Now the Trojans turn their attention to rivalry games with the Bruins and Irish, while watching the scoreboard to see if they get any help for a potential conference title game berth. That situation is out of their control but that’s a worry for another day. For now, we’re going to enjoy this one. Helton always talks about the 24-hour rule, where a team can celebrate a win or bemoan a loss for 24 hours before moving on to thinking about the next opponent. That’s a fine rule for most games but we’re going to enjoy this one a little longer.