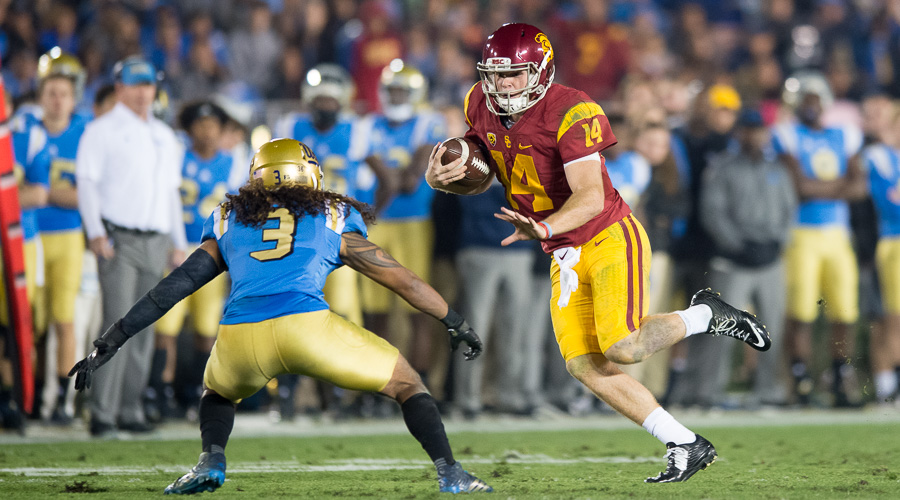 Beating the Bruins is always fun.

It’s doesn’t matter if they are a little down, as they were this year with a 4-6 record entering the game. What matters is the 36-14 victory, the overall dominance in stats on both sides of the ball, and the seventh win in a row for a USC team that continues the biggest in-season turn-around of the year in college football.

You can start anywhere you want on the numbers to see how one-sided this game was. Total plays were USC with 95 (!) and UCLA with 51. Time of possession was a whopping 43:47 to 16:13 in favor of the Trojans. USC has 527 total yards compared to 266 for the Bruins, and the Trojans converted 12-21 third downs while UCLA only converted 2 of 11.

It was actually a game that started off with momentum on the side of UCLA, thanks to a pair of early touchdown passes from Mike Fafaul to Jordan Lasley. Both touchdowns were thrown against coverage by Adoree’ Jackson, a former teammate of Lasley’s at Serra. For a moment there the Bruins had hope, especially with the fact that they ran the ball for 45 yards in the first quarter, something they had not been doing well so far this year.

From that point on, however, it was all USC as the Trojans ran off 29 unanswered points and completely shut down the Bruins offense. It wasn’t anything fancy that the defense did, according to Clay Helton, it was simply a matter of correcting some things that weren’t being done as part of the original game plan, and once that happened it turned the tide of the game. The USC defense forced three straight 3-and-outs of the UCLA offense following the second Lasley score (those three drives accounted for a total of 12 yards) and only allowed 10 rushing yards the rest of the day.

Meanwhile the USC offense was picking up steam after Sam Darnold shook off a pair of early interceptions. Helton said after the game that Darnold has a tremendous ability to brush off mistakes, “he has the ultimate short term memory and no conscience, that’s great for a quarterback”. He responded to both interceptions by leading the Trojans on scoring drives, and he was terrific in eluding the UCLA pass rush and keeping plays alive with his creativity and field vision.

Darnold was helped by an inspired USC offensive line that showed a lot of emotion, and a run game that piled up 260 yards on the ground. There was the explosive early touchdown from Ronald Jones that covered 60 yards in a hurry, there were the veteran carries by Justin Davis to add 48 yards, and then Aca’Cedric Ware finished things off in the fourth quarter with his hard running style.

There was also a big surprise, as there often is in this series, with the performance from De’Quan Hampton. JuJu Smith-Schuster officially got diagnosed after the game with a hip pointer by Helton and it seemed as if JuJu was banged up with a variety of issues throughout the game. Smith-Schuster still ended up leading the team with 8 catches for 76 yards but he had to leave the game several times and Hampton stepped in when JuJu went out. The first ball to De’Quan didn’t go well, as it was the first Darnold pick, but Sam came back to Hampton on what was basically a jump ball in the end zone and De’Quan came down with his first touchdown as a Trojan. He added another touchdown, as well as a key juggling first down catch later in the game. Afterwards, Hampton was rewarded with a trip up the ladder to lead the Trojan Marching Band, an experience he called “a dream”.

And there were certainly contributions across the board from others who played a role in the win. Rasheem Green blocked a field goal attempt for the second week in a row. Iman Marshall had a beautiful pass break-up in the end zone. Ajene Harris led the team in tackles (5) and Matt Boermeester went 3-3 on field goal attempts against his father’s old team.

It has been typical of the USC team in this recent resurgence that there was not a reliance on a single player. It’s one of the things that had made the good play seem so authentic, nothing fluky. It’s 11 different players catching passes from a QB who is spreading the ball around. It’s seeing timely contributions from freshmen such as Michael Pittman and Jackie Jones (you had to love the presence of Pittman to be counting the offensive players on the final kneel-down play at the end of the game). And more than anything, it’s having a team that took a punch from their rival to start the game and didn’t even blink.

The win keeps the Trojans alive for a berth in the conference title game and now the rooting interests turn to Utah in their match-up against Colorado. It’s ironic considering the loss to the Utes is the one that sticks in the craw right now, a game that was so close to being a Trojan victory and a preview of what was to come with Sam Darnold. The Utes are certainly capable of knocking off Colorado so it’s not like the Trojans are hoping for a prayer, it’s just that we won’t know the outcome until after the USC game against the Irish.

Oh yeah, those folks from South Bend. They will be coming to town on Saturday and they are reeling every bit as much as UCLA was, if not more. And no matter how tough things are going for them, you know they will be showing up looking to strike a blow just like UCLA did at the start of the game. This Trojan team knows that and they won’t get caught looking ahead. The game last night showed they have a good focus right now and it resulted in a very enjoyable win over the Bruins.