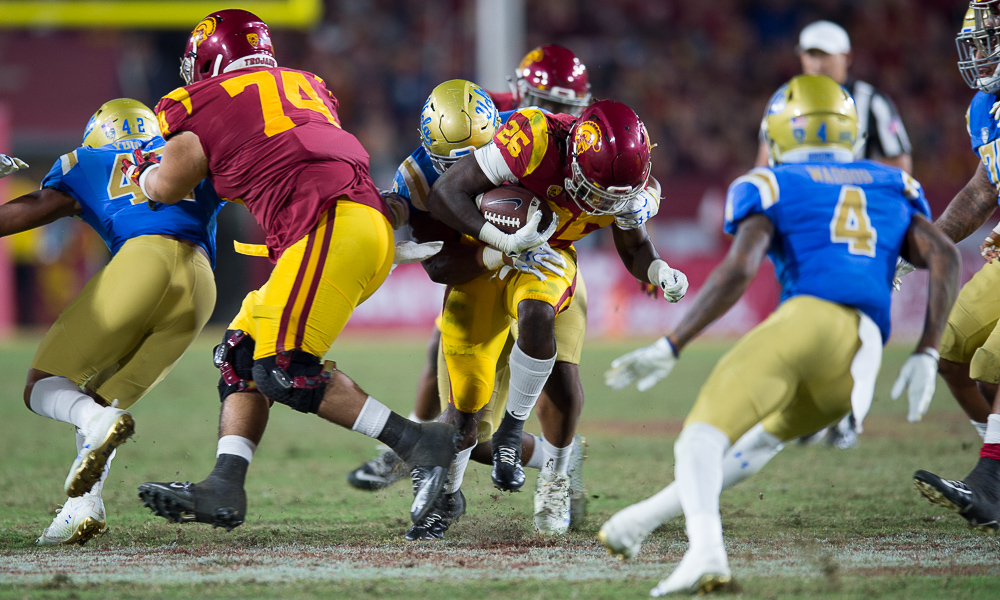 Let’s first say that it is always good to beat the Bruins, and the fact that the Trojans did that on Saturday by a score of 28-23 means that the next 365 days have an added degree of satisfaction by virtue of the win, and that is never to be taken for granted.

The game itself moves the Trojans to 10-2 with a much needed bye before taking part in the conference title game but it was not a smooth performance to get the win by any means, and the fact that it followed a similar pattern that the Trojans have shown several times this year of inconsistent play has left a lot of USC fans with an unsatisfied feeling, especially considering it was the Bruins on the losing end.

It’s been part of the ying and yang of this team all year long and after 12 games it’s pretty clear that this is who they are. A team that is good enough to win 10 games, to go undefeated at home for the 2nd straight year, and to beat the Bruins for the third year in a row. They are also a team that seems to play to the level of the opponent, and can struggle with penalties, being undisciplined and questionable play calling at times.

As for this game, what was most surprising was the performance of the USC offense against a Bruin defense that was among the worst in the nation, particularly against the run, yet the Trojans were never really able to get things clicking. It’s not that the offense played poorly, it just didn’t perform at a level we’ve seen lately.

Sam Darnold, who stood front and center in this match-up as part of the Darnold vs Rosen storyline, had a rushing touchdown while completing 17-28 passes for 264 yards, with one interception and no touchdowns. Not bad numbers for most quarterbacks but not at the usual Sam standard. The Trojans were able to run the ball for 153 yards, with 122 of those coming from Ronald Jones (who now only sits 8 yards away from passing O.J. Simpson for 5th on the all-time USC rushing list) but one of the big problems was going 2-10 on third-down conversions, which really limited the ability to sustain drives.

The Bruins, on the other hand, converted 10 of 19 on third down and ran 83 plays to 69 for the Trojans, and that allowed for Rosen to throw 52 passes (completed 32 for 421 yards and 3 TD’s with 1 pick). We knew Rosen could throw the ball, and after the game Chris Hawkins called him the best quarterback he’s ever faced, but the Trojans were also able to pressure him just enough with four sacks (including a forced fumble) and had 7 pass deflections and 8 tackles for loss, along with a timely end zone interception from Marvell Tell.

The timing aspect was important for USC in this game. The biggest play of the night was arguably the opening score when the Trojans executed with perfect deception on a punt return when Ajene Harris acted like he was getting ready to field the ball, only it was actually headed into the arms of Michael Pittman along the opposite sideline and he headed 72 yards into the end zone to give USC an early lead. I’m still not sure why the Bruins coverage team went left when the punt was headed right but we’ll take it.

And in the end, when the game was on the line, it was the offense going on a 10-play, 90-yard scoring drive (including key Darnold completions to Stephen Carr and Daniel Imatorbhebhe) that took up five minutes of the fourth quarter to seal the win and cue the Trojan Marching Band to begin playing “Tusk”.

That has been another trademark of this team, to find the way to win, and it usually involves Darnold somehow. Rosen may have put up the flashier stats in their private QB battle in front of the NFL scouts, but Sam got the win. And he’s just fine with that, as is the whole Trojan team. They have been playing for 17 straight weeks, 5 weeks of fall camp and 12 weeks without a bye, and have seen injuries impact them in so many ways, so there are no apologies for lack of style points. Instead, just ring the victory bell and move on.