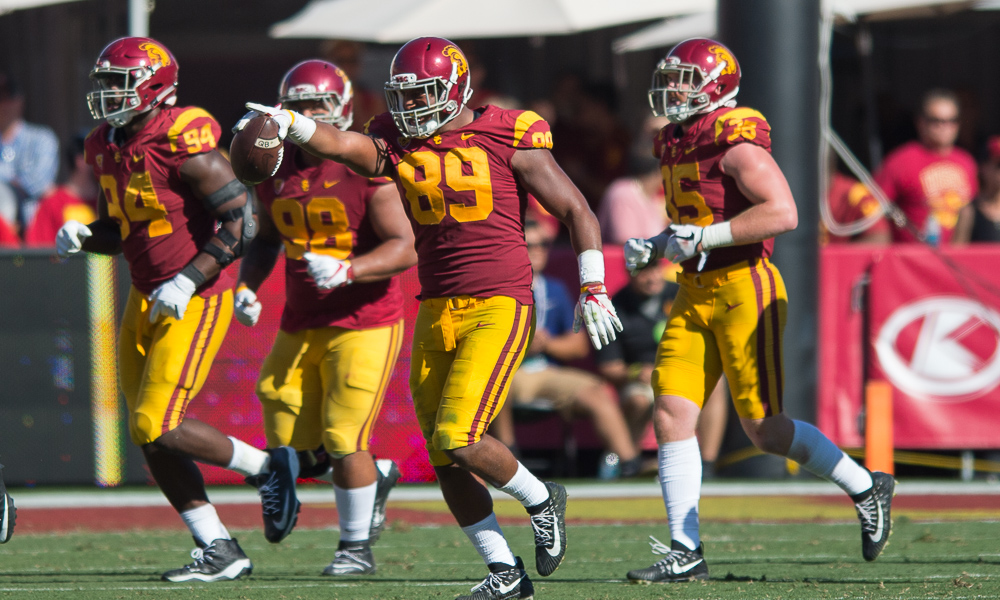 What we have seen from the 2017 USC Trojans is what we got on Saturday at the Coliseum in the 38-10 victory over Oregon State.

The Trojan offense was looking to get off to a fast start and hopefully find their rhythm after some inconsistent performances in recent weeks and things couldn’t have gone much better on the two opening drives with a pair of touchdowns and an early 14-0 lead.

But, as has also been the case this season, the flow of the offense stalled, this time after a muffed punt by Ajene Harris and a fumble by Sam Darnold gave the Beavers good field position that they were unable to take advantage of thanks to a blocked kick and a missed attempt. A 3-and-out on the next series series by the USC offense gave Oregon State field position at midfield and they finally converted to make the score 14-3.

Those were the only points the USC defense allowed until the fourth quarter, and the Trojans did add 14 points on a pair of Darnold TD passes but there was a sense the game could have easily been put away in that time. Let’s face it, Oregon State is not a good football team right now but if they were, there were opportunities for them in the middle of the game. USC was unable to really get the run game going as there were only 20 carries for 62 yards through the first three quarters with Ronald Jones having success on 10 carries for 69 yards but you had the feeling he could have done more with a patchwork offensive line that was blocking well.

As it turned out, the Trojans were able to pull away in the fourth quarter to put the game out of reach (and the score could have been higher if Clay Helton had not elected to take a 4th down knee with under a minute to play) even if it wasn’t the complete game performance that many hoped for as USC heads to the second half of the season with upcoming games against Utah and Notre Dame.

One of the real pleasant developments of the game was how many young or untested players got a chance to contribute and make plays.

It started with Tyler Vaughns and his 37-yard touchdown catch from Sam. Tyler has really developed in recent games to the point where it doesn’t surprise you to see him put up 5 catches for 68 yards and a score (the first TD catch of his career).

There was the blocked kick from Jones and Bigelow. Jackie is another player who has steadily improved this season and it wasn’t a shock to see him block a kick because he does it regularly in practice, but it was unexpected for someone like Kenny to get a hand on the ball, and of course it’s great to see any contribution that he is able to make these days.

Josh Falo had a 30-yard TD catch down the sideline that should be a preview of what he can do as a weapon in the passing game. It was the first TD catch for the true freshman.

There might not have been a more exciting play in the game than the 51-yard touchdown dash from Matt Fink on his first carry as a Trojan, he opened up a lot of eyes with that athletic ability.

We talked about how Jones could have been used more but he has also been banged up so we saw more of Vavae Malepeai and Aca’Cedric Ware, who both had moments. Vavae continues to run hard, and Ware had one of the better catches with his twisting effort to bring in a 37-yard pass from Sam.

Kudos to Andrew Vorhees, Austin Jackson and Clayton Johnston for what they did on the offensive line, and to Malik Dorton and Brandon Pili for stepping in on the d-line with some solid work. A special note to Christian Rector, who has been a revelation since moving into a starting role after Porter Gustin went down, in this game he contributed 7 tackles and a fumble recovery. And yes, it was another perfect snap from Jake Olson.

The fact that so many young players got some playing time could be a factor as the season goes along because we simply haven’t seen a lot of rotation to this point, and we’ve definitely seen the injury bug hit the Trojans through the first half of the year. With no bye week, it will be important to get some added depth and the coaches should have an idea now that some untested players could get some meaningful minutes down the final stretch of the season.

That stretch starts next week with a critical Pac-12 South game against Utah in the Coliseum. The Trojans sit atop the South standings at the moment and control their own destiny for the conference title game, while the Utes suffered their first loss of the year last night against Stanford. Everyone surely remembers what happened last year when the Trojans and Utes faced off and the impact that loss had on the USC season at the end of the year. We don’t know where things will stand at the end of this year but this game appears to have similar stakes.

Will it take a more complete game than we saw from the Trojans yesterday to get the win? Probably. Does this team have that in them? Certainly.