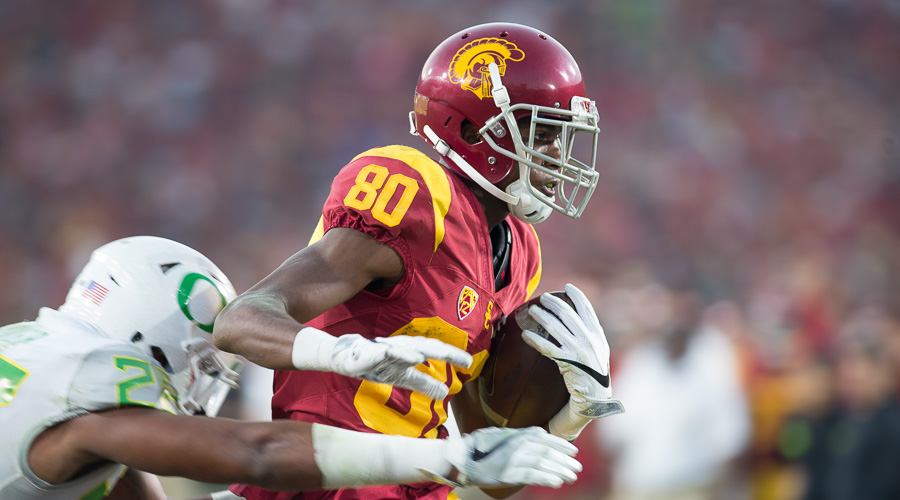 It was a satisfying win on Saturday for the Trojans 45-20 over the Oregon Ducks, one that kept the USC hopes alive for a berth in the conference title game, extended the current winning streak to 5 games and gave a little bit of payback in shutting down an Oregon offense that had seen success in the Coliseum in recent visits.

This game started off strong for the Trojans defense by forcing three straight 3-and-out possessions for Oregon, and confusing true freshman quarterback Justin Herbert and not allowing him to establishing any early rhythm. The USC offense did their part by jumping out to a 17-0 lead in the first 10 minutes of the game, thanks in part to a pair of Ronald Jones touchdown runs and a deceptive punt return that helped set up one of the scores.

It was a much needed performance from Jones as the Trojans were without Justin Davis and Aca’Cedric Ware as part of the tailback rotation due to ankle injuries. All Jones did was respond with 20 carries for 171 yards (8.6 ypc) and four rushing touchdowns, which tied a USC record most recently set by LenDale White in 2005 against Arizona.

Jones was a terrific counter to Trojan quarterback Sam Darnold who continued to spread the ball around masterfully to the USC skill players, his first 8 completions were to 7 different Trojan players. Of particular note was Deontay Burnett who led the way for USC with 7 catches for 87 yards and a touchdown, while the USC tight ends got into the act as a group with 7 catches and a touchdown for Taylor McNamara. The most impressive catch by a tight end probably went to Daniel Imatorbhebhe for his juggling grab of a Darnold pass.

All in all the USC offense put up 579 total yards (the 5th straight game the Trojans have gone over the 500 yard mark), converted 9 of 14 third-down opportunities, and went 5-5 in the red zone (4 touchdowns, 1 FG).

For the defense, it was the kind of results that had been hoped for with Clancy Pendergast going against the Ducks offense. Oregon was held to 85 yards rushing on 30 carries (2.8 yards per carry), gained 288 yards total (had been averaging 519) and converted just 5 of 16 third-down attempts. It was also the fifth straight game that the Trojans defense held the opponent to a season-low in points.

There was production up and down the defense. Porter Gustin had arguably his best game as a Trojan with a key batted down pass on a fourth-down, along with a big tackle-for-loss. Rasheem Green and Uchenna Nwosu played well. Cameron Smith led the Trojans in tackles. Adoree’ Jackson had a beautiful pass break-up on a well thrown deep ball where he was in single coverage. Leon McQuay stepped into the slot nickel role and did a good job and Chris Hawkins added six solo tackles.

There was also a little trickery on special teams when the Trojans orchestrated a decoy return with Adoree’ Jackson going away from where the ball was kicked. The Oregon coverage team gravitated to Adoree’, but the ball went to the other side where Michael Pittman was waiting and he returned it 28 yards. Add that to the bag of tricks from John Baxter.

The only real issue from the game came in the form of penalties as the Trojans were flagged 13 times for 129 yards. With so much going right for the team these days it’s something that will have plenty of attention from the coaches this week, especially as the opponent level goes up a notch with the Washington Huskies on Saturday.

There will be no questions about the quality of the opposing defense in this game. After recent weeks of facing defenses ranked among the bottom in the nation, the Trojans will face a Washington team that is undefeated, knocking on the door of the College Football Playoff rankings, and feeling very good about themselves under Chris Petersen. And they have earned that right with solid play all year long, but the Trojans have earned the right to have so much at stake in this game too. It’s been a long road this season to arrive at this point but it’s here, and the Trojans are as prepared as they could want to be.