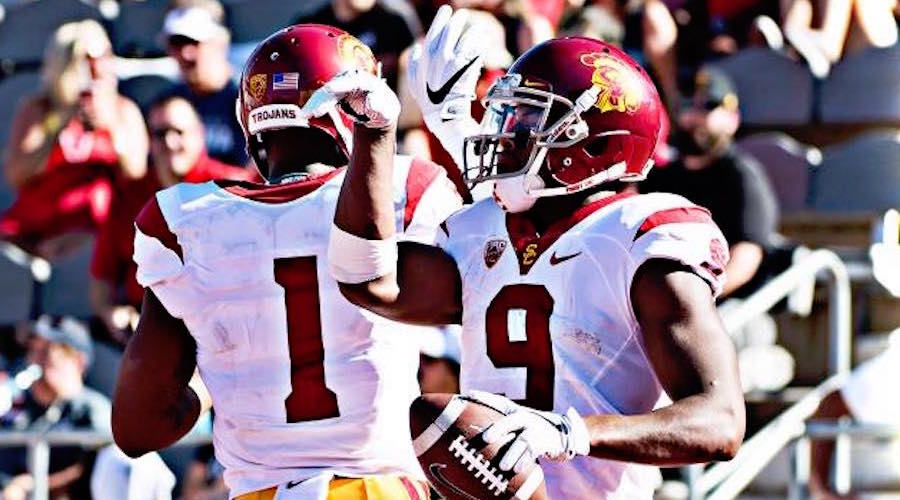 The Trojans did what they needed to do against Arizona by going into Tucson and overwhelming a Wildcat team that has been decimated by injuries.

It was another step forward in the progress department for the Trojans who were challenged by Clay Helton to put together a complete game performance, and that’s what happened for the third USC victory in a row and a chance to head into the bye next week with some momentum for the second half of the season.

The numbers on offense are what really stood out. The Trojans were able to march down the field on their opening drive for a touchdown thanks to some nice runs from Ronald Jones and a key third down pass completion from Sam Darnold to Steven Mitchell. The Wildcats answered with a score of their own to tie the game early, but then it was a Trojan explosion as USC scored the next five touchdowns thanks in large part to an assault from Darnold.

It wasn’t the flashiest or crispest performance from Darnold yet it says something about how far he’s come that he wasn’t considered especially sharp on a day where he throws for 5 touchdowns, runs for a career high in yardage, doesn’t throw a pick and doesn’t get sacked. Darnold did a good job of spreading the ball around as 9 different USC receivers caught a pass but it was the running game that provided the foundation for the win on a day when senior tailback Justin Davis was unavailable due to injury.

Fortunately for the Trojans, all three backs that took turns rotating in for Davis had big moments in the game. For Jones, it was that opening drive when he was a key factor on a 10-play drive to get the scoring started. Aca’Cedric Ware showed that he has the ability to pound the ball in the middle of the line and then break a long gainer. And Dominic Davis showcased the speed that we know he has with a long run to help finish things off.

The final stats show the Trojans rushing the ball for 320 yards in the game, with Jones having 16 carries for 77 yards, Ware reaching the 100-yard mark with 12 carries for 103, and Davis getting 89 yards on 7 carries (a total that was helped by the 85-yard run).

Of course, all those offensive numbers were helped by a defense that got four turnovers while the Trojans didn’t turn the ball over at all. You’re going to win a lot of football games when you are +4 in the turnover margin.

Things got going early when Chris Hawkins forced a fumble that was returned deep into AZ territory by Adoree’ Jackson, then Biggie Marshall and Ajene Harris added interceptions, and finally Connor Murphy pounced on a late Wildcat fumble to close out the game.

The Trojans took advantage of an injury-riddled Arizona depth chart on offense that saw a true freshman Khalil Tate getting his first start at quarterback, and a tailback rotation that saw regular starter Nick Wilson have to leave the game after an early 39-yard run, but he only had 10 yards on 5 carries beyond that. Arizona was having so much trouble getting things going against the Trojan defense that they only managed 4 passing yards in the first half, and Tate was eventually replaced by tight end Matt Morin, who played QB in high school.

Now the Trojans get a chance to take a breath with a bye week, and to nurse some injuries of their own before beginning the stretch run of the season.

The first update will come soon after an MRI is taken today on wide receiver Steven Mitchell, who suffered a “lower body” injury during the game that unfortunately looked like a left knee issue when watching the television broadcast. Mitchell, who injured his right knee prior to his freshman season at USC, had a long line of teammates wishing him well as he was helped off the field following the non-contact injury.

JuJu Smith-Schuster also was forced to leave the game after grabbing 9 catches for 132 yards and three touchdowns, when he was hit in the lower back on a sideline catch. Helton described the it was JuJu “taking a helmet to the back” but the x-rays taken were negative and “he should be fine”.

There is also the matter of Justin Davis and his high ankle sprain, something that will hopefully heal with a little bit of rest in the coming weeks.

The bye is coming at a good time for this team after all they have been through in the first part of the season. Things obviously didn’t get started in Dallas the way Trojan fans had wanted, and there was a quarterback switch along with issues getting pressure from the defense, but those problems seem to have faded away in recent weeks as the coaches began adjusting to the particular talents of this team, and as the schedule put forth some less challenging opponents. In other words, the Trojans have beaten some teams they were supposed to beat, and right now that is good enough to get to a 4-3 record with plenty of football left to play.

Bring on the bye, rest up, and we will see you for the Cal game in two weeks.