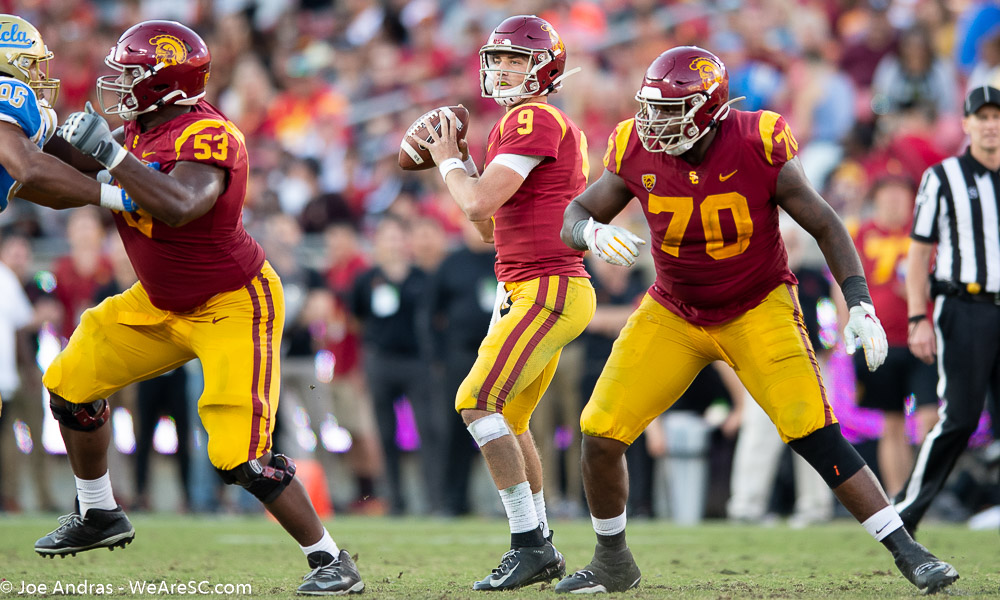 USC finished its regular season with an 8-4 record and will now wait for the result of Saturday’s game between Colorado and Utah to see if the Buffaloes can knock off the Utes and send the Trojans to the Pac-12 Championship game. But with the regular season finished, we take a look back at the biggest events that shaped the Trojans’ 2019 season.

Following last year’s season finale, former athletic director Lynn Swann wasted little time in stating publicly his decision to retain head coach Clay Helton for the 2019 season and beyond. The day after USC lost to Notre Dame to close out the 2018 season, Swann delivered a statement that included the oft-repeated line: “We acknowledge and understand our deficiencies in areas that include culture, discipline, schemes, personnel and staff.”

Kingsbury’s Hit and Run, And Other New Assistants

Helton did make several important moves with his assistant coaches, electing to bring in a new offensive coordinator, as well as running backs, defensive line and defensive backs coaches. The biggest news of the offseason occurred when Helton was able to land former Texas Tech head coach Kliff Kingsbury as his new offensive coordinator. But that arrangement lasted a little more than a month, as Kingsbury took off to become the head coach of the Arizona Cardinals. As a rebound, Helton went after North Texas offensive coordinator Graham Harrell. Harrell was another former Texas Tech quarterback who had served under Air Raid authority Mike Leach.

Harrell truly unleashed the USC passing game, as Kedon Slovis set a school record with 515 passing yards against UCLA and a school record for passing yards by a freshman, with 3,242 yards, and four USC wide receivers caught at least 35 passes. Michael Pittman led the way with 95 receptions for 1,222 yards and 11 touchdowns. Tyler Vaughns and Amon-Ra St. Brown finished with identical 68-catch, six-touchdown seasons, while St. Brown had 879 receiving yards and Vaughns had 858. True freshman Drake London also found his way into the offense, as he finished with 35 catches for 533 yards and four touchdowns — one in each of the final four games of the season.

Defensive backs coach Greg Burns, defensive line coach Chad Kauha’aha’a and running backs coach Mike Jinks all drew positive reviews from players and the results have to be considered overall positives as well. Burns got consistency and production out of a defensive backfield that was very young and inexperienced to start the season. Cornerbacks Olaijah Griffin, Isaac Taylor-Stuart and Chris Steele developed nicely, and safeties Isaiah Pola-Mao and Talanoa Hufanga were playmakers. Much of Kauha’aha’a’s responsibility this season was shoring up the interior run defense, and with the exception of the Notre Dame game, the Trojans responded well there. Ultimately, the USC defensive line is probably still a position where USC needs to take another step up from adequate to dominant, as opponents still ran for 166.5 yards per game, good for 78th in the nation. Jinks was dealt a difficult hand, as maybe no position coach in the country needed to go deeper into his bench than the USC running back coach. the Trojans lost their top three backs for huge portions of the season, but Jinks was able to get true freshman Kenan Christon ready to perform and this looks to be one of the stronger positions for the Trojans next season.

Trojans Win and Lose in the Transfer Portal

USC lost a couple of players to the transfer portal who could have contributed this season. Defensive end Wole Betiku wound up at Illinois, where he leads the team with eight sacks. Wide receiver Josh Imatorbhebhe also joined the Illini, and he has 33 receptions for 634 yards and nine touchdowns this season. The Trojans also lost wide receiver Devon Williams to Oregon, safety Bubba Bolden to Miami and linebacker Levi Jones to North Carolina State.

But the Trojans also got two big additions from the portal. Cornerback Chris Steele found his way to USC after enrolling early at Florida, then looking like he might be headed to Oregon after announcing his transfer intentions. He was a significant part of the defensive backfield this season, finishing with 33 tackles, four pass deflections and a fumble recovery. And offensive lineman Drew Richmond was a fixture at right tackle this season after coming over from Tennessee. He gave USC a veteran presence on the right side and allowed the Trojans to send out the same four starters at guard and tackle in all but one game this season.

It was evident from Day 1 of spring ball that true freshman quarterback Kedon Slovis could play and play well at this level. But I don’t know how many people were truly prepared for Helton to announce that he was the No. 2 quarterback heading into the season. That decision likely cost the Trojans the availability of Jack Sears this season, as Sears soon-after announced his intentions to transfer. But it also might have won a few games for the Trojans this year, as Kedon Slovis was called upon early in the season due to….

Maybe nothing played a bigger role in shaping this season that injuries. Before the season even began, the Trojans lost senior linebacker Jordan Iosefa to a knee injury that ultimately cost him the entire season. The linebacker spot was dealt a second season-long blow when Solomon Tuliaupupu was ruled out, as he needed another surgery on his injured foot.

But no injury had a more visible impact on the Trojans than starting quarterback JT Daniels suffering a torn ACL at the end of the first half of the first game of the season. Daniels was playing well against Fresno State, and certainly could have been in line for a terrific sophomore season. But Slovis stepped into the huddle and put together a phenomenal freshman year–bordering on magical at various points. The issue, of course, was two three-interception games that hurt the Trojans badly in losses to BYU and Oregon. Would Daniels have made those same mistakes? Would he have put together the first quarter Slovis did in a win at Arizona State or the final eight quarters of the season in wins against Cal and UCLA?

But that’s not even the full story when it comes to injuries at a single position, because Slovis was knocked out on the second play of the Utah game and the Trojans turned to Matt Fink.

Fink responded with the game of his life, letting his wide receivers dominate man coverage by the Utes and leading the Trojans to a 30-23 win against the No. 10 team in the country. However, Fink couldn’t conjure the magic the following week, as the Trojans offense scored its fewest points of the season in a 28-14 loss at Washington.

While the Trojans had to turn to their No. 3 option at quarterback, they needed to go as far as No. 5 at tailback. Starter Vavae Malepeai injured his knee against BYU but played through pain for several weeks before shutting things down following the Notre Dame game. When Stephen Carr and Markese Stepp were both injured against Arizona, that left true freshman Kenan Christon and former walk-on Quincy Jountti to carry the load against Colorado, Oregon and Arizona State. While the Trojans were able to get it done against the Buffaloes and Sun Devils, the lack of a run game against the Ducks was too much to overcome.

Defensively, the Trojans were without key players for several important games as well. Hufanga missed the Washington and Oregon games. But USC was hit hard by injury heading into that game against the Ducks. In addition to Hufanga, Malepeai, Carr and Stepp, the Trojans were also without defensive end Drake Jackson, and linebacker Palaie Gaoteote was very limited with an ankle injury.

It wasn’t just injuries to USC’s quarterbacks that helped shape the season. The Trojans were also beneficiaries of several quarterback-related injury issues this season. Slovis made a statement to the nation with his performance against Stanford, but that came against Cardinal backup Davis Mills, who was in for an injured KJ Costello. Colorado quarterback Steven Montez led the Buffaloes to a 10-point lead late in the third quarter but was clearly rattled by a hit from USC outside linebacker Hunter Echols. Though he returned to the game, he was clearly not the same quarterback as Colorado could get nothing going in the fourth quarter and USC rallied for a 35-31 win.

The Trojans also caught a break against Arizona State, as Jayden Daniels was sidelined after injuries his knee against UCLA. USC drew fellow true freshman Joey Yellen, who ultimately closed a 28-7 USC lead to 31-26, but was betrayed by a huge drop from an Arizona State tight end on a pass that looked like it could have been a game-winner.

The following week at Cal, the Golden Bears returned starting quarterback Chase Garbers to the lineup. But Drake Jackson brought Garbers down hard after a scramble and he was forced to the sideline for the rest of the game. Replacement Devon Modster finished a second-quarter drive that tied the game at 10, but could get nothing going offensively from that point on, as the Trojans cruised to a 41-17 win.