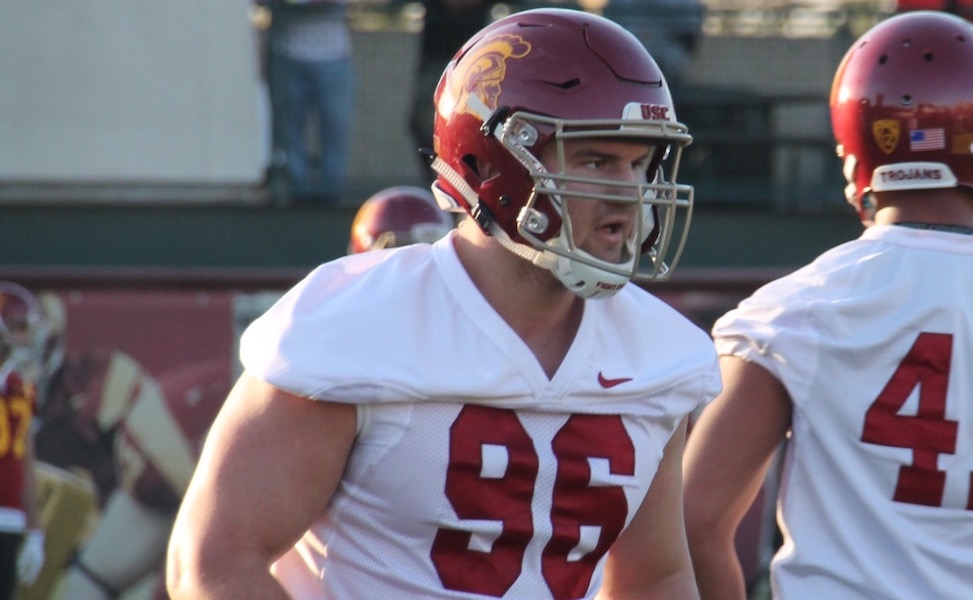 There were six early enrollees this spring and here are some thoughts on how they are doing so far:

The junior college defensive tackle has come in and made a strong impression with his physical style. Caleb is a big strong guy but what stands out to me about him is how active he is on the field, particularly with the use of his hands. I asked one person in the program about him and the response was “oh, that’s my guy, he’s a stud”. Helton commented that Caleb’s head is still spinning a little bit while learning the playbook but the skills are there to make an impact. He’s currently lining up at DT behind Christian Rector.

Helton gave some pretty strong praise when talking about Talanoa’s football instincts and those have been obvious through the first two weeks. I also continue to think he reminds me of Su’a Cravens if Su’a had been left at the safety spot. The size is there too. This is a crowded safety spot with young talent but there’s no doubt that Hufanga fits right in and will be in the rotation next fall along with being a special teams contributor.

Probably the biggest surprise among the group to this point as rehab for guys like Greg Johnson and the absence of Jackie Jones has resulted in Williams being part of the mix right away in spring and he has made his presence felt, including a nice pass break-up in the scrimmage last Friday. The thing that stands out the most about Chase is his height (6-2) and long arms, two very good traits for a corner in the Pac-12 these days.

I was focusing on Scott during one series in the scrimmage and the thing I noticed was how often he was around the ball. That’s what you get from Raymond. I’ve always liked the comparison to Hayes Pullard and nothing I’ve seen so far makes me want to go away from that. He’s been lining up as a reserve inside linebacker.

It’s been a real opportunity for Dedich in spring as Toa Lobendahn will be limited from all contact so Justin has been getting the #2 reps behind Brett Neilon at center. Justin is a plug and he is very aggressive but, like Tremblay, there is the understandable need to understand the playbook at the center spot and that’s just a hard thing to do for an incoming freshman in spring. He’ll be fine in due time.

Another pleasant surprise. Mauga is lining up behind fellow Hawaiian Jordan Iosefa at outside linebacker and he’s another very active guy along the line. He’s not overly tall at 6-2 but powerfully built in the upper body.