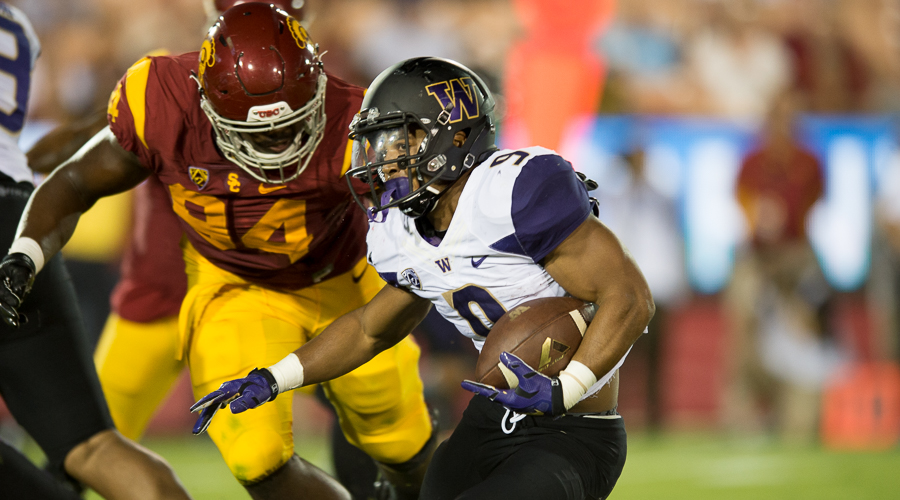 What happens when a defense holds the opponent to 299 net yards, 3 TFL’s, 2.0 sacks, one interception and allows 35% (6 of 17) 3rd/4th down conversion rate? Answer: second best defense on the field and an embarrassing second home loss in a row to a 17 point underdog. Sark got punked. He reminds me of “he that shall not be named” except Sark can recruit…for now. You can’t put the blame on certain decisions on anyone but Sarkisian. Helton did not call for a 4th quarter field goal Sark did when down by 5. I can’t explain that one and I’ve watched and played a fair amount of Trojan football. As for Wilcox, he put his best effort and game plan of the season out there and I saw some good things happen but that wasn’t enough. Washington schooled everybody who watched us last night on how to play defense against the Trojans. I’m thinking ND has a pretty clear picture of how to crowd our throwing lanes, take away JuJu and force others to step up and make catches. We can run the ball but hey why bother? I’m supposed to be convinced that Sark is smarter than all of us and really knows what it takes to win. Frankly I think he’s flummoxed and lost and he’s close to losing this team’s trust. Yes it’s that bad and don’t kid yourself last night was a watershed game result. We’ll have to see where it leads. Good teams and good coaches rebound off these embarrassments. Great teams and great coaches don’t have these embarrassments.

Even though we were the second best defense on the field strangely that was by far our best performance of this season. The LOS was strongly contested and the D responded well to sudden possession changes in the first half. I really liked the stoutness at the POA when Washington pulled their blockers and attacked us. We did a much better job closing down the running lanes with exception of their one TD drive in the second half. In that case we got gassed it seemed to me and then started looking and playing like the second best D on the field with guys getting and staying blocked. Fully half of all UW’s 3rd down conversions of the game were on that drive.

We used our 3-4 Hybrid again with mostly man on the corners and a 2-deep (toggling in and out of the box but mostly back). We couldn’t handle the quick hitters very well but Dawson showed some good anticipation when he was in there. Biggie had a real difficult time on his coverage by my eye. He was beaten deep a lot on fade routes but the QB had difficulty with the throw which is a tough throw. Btw UW completed more fades than we did…mmmm interesting. We didn’t twist much but did go with a good amount of LB pressure which worked pretty well. But remember this isn’t a read/option QB yet and is a true freshman. He managed the game pretty well against us and threw only one pick which was a nice play on the ball by Marshall. Our tackling improved but we still have some issues with technique occasionally with guys lowering their heads and not squaring up. Secondary play is just pedestrian right now. Safeties are back to prevent the big play though that seems to exclude covering the TE seam route.

Along the LOS there was much stouter play with guys getting up-field and off blocks the best this season by far. Certain gaps and running lanes got squeezed better but a hats of the UW’s Gaskin with 134 rushing yards. Gaskin’s running and Mikens’s quick slants were UW’s offense. Nice jobs by Townsend and Green btw along the LOS. They made a difference…get ready for ND. I also saw much better gang tackling and people flying to the ball in particular in the first half. Which brings me to this observation; our play went down a full notch on intensity most of the second half and UW’s went up. Defense is as much about intensity as anything once the basics are in place. That extra half step or additional tackler reduces those YAC (yards after contact) for ball carriers or those quick hitting passes.

In the second half the defense started out well but then JuJu put it on the ground and tried to head fake the officials instead of fighting for the ball. Nice. Result; a trickeration play that our free safety still hasn’t reacted to and seven points for the Dawgs. A great play call and our guys weren’t ready at all for that play in that situation. Later UW put together their only real drive of the game and that’s when we all saw or efforts along the LOS come up short. At that point the Dawgs imposed their will upon us and stuck the ball into the end zone. Man-on-man, big-on-big UW won that crucial battle.

I’m pretty sure you would agree that the defensive performance was enough to help put a W on our W/L record. Not this time and there are games like that when you have to reach deeper than before and come up with that extra stop, pick, fumble, TFL or sack. This team has a few extra days to get ready for one of the most hostile difficult environments in the NCAA and what I consider the best rivalry in college football. Hey Coach Sark, so much was lost last night but so much can be gained with a win next Saturday. Get it done…Fight on!

Kevin Bruce played linebacker for the Trojans from 1972-75 and was a member of two national title teams. He is now a member of the FWAA.