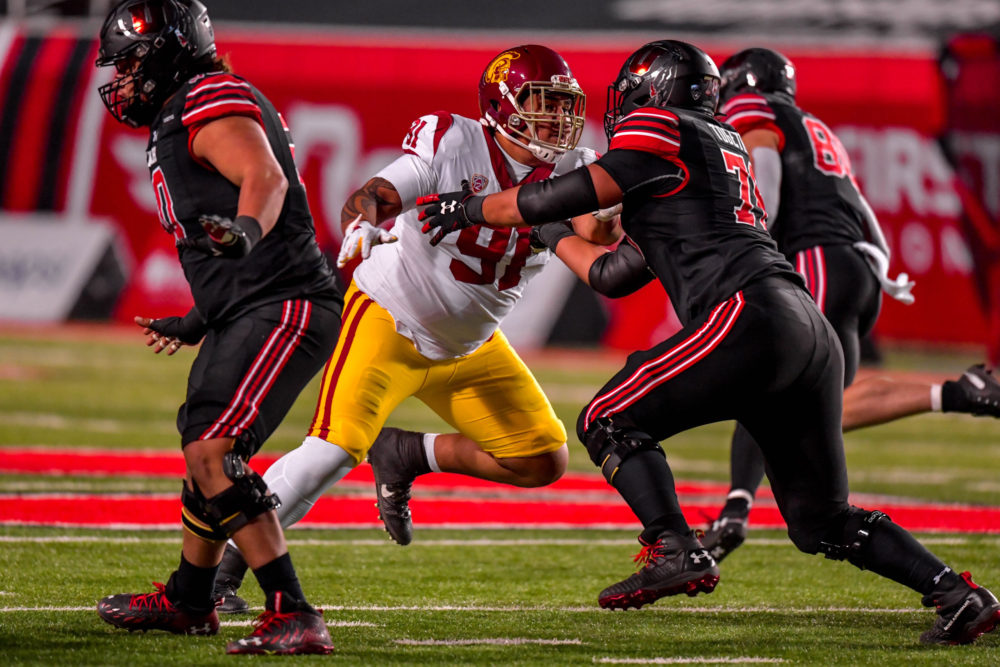 The best way for me to start this column is to point to the obvious. How about, it’s a good thing that the defense and the special teams showed up late Saturday night. Our offense is clearly having massive issues and hasn’t figured out how to score TDs in the redzone, convert short yardage situations, get receivers open and give some help to a struggling quarterback against zone pass coverage.

The defense made significant changes designed to stop Utah’s run game and force first time starters to throw to beat us. I’ll explain what I saw on defense that might surprise you.

This defense shut out the Utes in the second half despite playing a number of big plays against them. The defense took some lessons from the first half and made some adjustments, which surprised me that we actually made adjustments. The defense used five man front with faster players including safeties, but typically Hufanga up in the box, but on the strong side perimeter.

Utah tried to audible out and when they did our defense loaded even more pressure folks to keep the untested quarterbacks under pressure. We also stunted to both the wide side and strong side. This puts pressure on the O-line to move their feet and creates gaps to exploit. We also got burned on a few perimeter plays as linebackers play deep then are off the line of scrimmage and then have to close the gap where running back is going.

This is what the announcers meant as they kept saying the defense was taking wrong angles. This gets correct as linebackers attack the LOS and find the open gaps.

Net, we produced six TFLS and three sacks while accumulating two fumble recoveries and three picks. Without this pressure and turnovers we clearly lose this game given the atrocious offensive performance. Hats of to Kana’i Mauga, Ralen Goforth, Hufanga, Isaiah Pola-Mao, the Tuipulotu brothers and Drake Johnson. Others had some good moments though I doubt any of these mentioned players will grade out well except Drake Jackson. What you saw from Todd Orlando was his pressure approach, which has pluses but is vulnerable to a good quarterback, especially a scrambling one — much like the QBs we’re going to be seeing in the balance of our games. Also a shoutout to Ben Griffiths and Parker Lewis both on special teams as the kicking game was a major factor in this victory.

For the record, we had the same number of first downs (17) as Utah with a poor 50% redzone TD rate, but offset by holding Utah to 33% (1 out of 3). Our net rushing was 93 yards but holding Utah to 119. This was a close game which should have been a runaway but we will take a win and hope we improve in some critical areas particularly on offense.